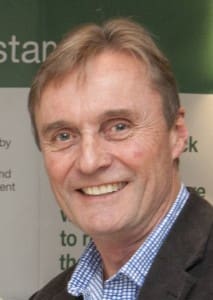 Under the old national Johne’s program properties found to have the disease were forced to endure costly and destructive eradication programs, often with little compensation.

The new J-BAS system puts decisions on how to manage the risk of Johne’s and how to respond to detections in the hands of property owners themselves.

Some producers have mounted a campaign against the new approach, saying it was developed behind closed doors and does not amount to a complete deregulation of Johne’s management, because producers must now deal with the introduction of the new J-BAS.

A letter with about 80 signatures calling for an inquiry into the new arrangements was reportedly mailed to Barnaby Joyce recently after being released first to the media. An online petition pushing for the J-BAS scheme to be abolished has attracted about 250 supporters so far. Mr Joyce has yet to publicly comment on the calls.

However, the issue attracted no questions from a large crowd of producers at the Yulgilbar Beef Expo and Forum on Friday, where CCA’s Justin Toohey took to the stage to explain how and why the J-BAS system was created.

He said the great pain caused to Rockley Brahman Stud and many others caught up in the massive trace-forward program that followed the 2012 Johne’s detection at the Stud had led to significant pressure to review how the disease is managed.

Mr Toohey noted that in 2015 a Meat & Livestock Australia study showed that Johne’s was the 17th most important disease in terms of production impacts.

“So it was clearly overkill,” he said, referring to the heavy-handed, eradication-focused Johne’s regulations of the time.

He said two factors had to be considered in developing a new approach in Australia.

One – Johne’s needed to be treated like any other disease, so producers should be able to keep it out of their herds if they don’t have it.

Two – Johne’s does have an impact on live export trade, as evidenced by Japan’s suspension of live cattle imports from Australia for some months last year because of a positive Johne’s test.

Johne’s disease is mentioned in nearly every live export protocol Australia has with customer countries. “Many countries are doing what they can to control the spread of the disease, and they expect us to do the same,” Mr Toohey said.

He said industry leaders, producers, veterinarians, departmental staff, regulators, scientists and Johne’s Disease experts worked for over 12 months to design how we “might best get out of the mess we were in”.

Two major decisions followed: One was to deregulate and to have industry run its own programs. The second was that Johne’s Disease was Johne’s Disease, recognising that different strains (ie Cattle Strain, Sheep Strain, Buffalo/Bison Strain) could cross over into each species.

“Prior to this we were saying Johne’s disease in cattle is the C strain and it can’t cross over, and the same with sheep and buffalo,” Mr Toohey said.

“In fact 30 percent of infections in cattle in Victoria in one program we were monitoring were infected with the sheep strain.

Mr Toohey said Cattle Council of Australia had a responsibility to develop tools to allow producers, if they chose, to manage Johne’s Disease and to prevent it coming into their herds if they didn’t have it, or to stop it from spreading from their properties if they did have it.

He said that while Johne’s is quite prevalent in dairy herds and in sheep in some areas, the vast majority of beef herds in Australia don’t have Johne’s.

“So we just wanted a voluntary tool producers could use, and hence the Johne’s beef Assurance score – J-BAS – was developed.”

The J-BAS system is very similar to the assurance score system that has been used for effectively for some years in the dairy industry, Mr Toohey said.

He said J-BAS was a useful, voluntary tool for transferring important JD-related information about cattle being traded and as a guide for producers working with their vets to return an infected herd to one of very low risk if they wish.

However, he said decisions by Western Australia and the Northern Territory to use J-BAS as an entry-level requirement into their jurisdictions had thrown a “spanner in the works” of the planned new national approach.

WA and NT throw spanner in the works

WA and NT had taken this approach despite the fact export protocols require freedom from Johne’s to be demonstrated at individual property level, and do not acknowledge state-based claims about Johne’s freedom.

“We know that trade with cattle when it comes to JD is a herd by herd or property by property or issue,” Mr Toohey explained.

“So while the overseas protocols mention Johne’s Disease, what they expect is the State Governments to certify individual properties, not states or zones.

“So it is up to individual property owners to endeavour to keep JD out of the properties.

“What WA and NT have done, at the request of their industry organisations, is create a wall that encompasses their entire state.

“Overseas countries don’t care about the State being free of JD. This is the confusing thing and why we don’t quite understand why these two jurisdictions have done this. It comes down to property by property.

“However to give WA their due they have now started a surveillance program at half a million dollar cost to support their claim of freedom in their cattle, and we just have to ride the storm for the moment, acknowledging they will only let JBAS 7 or 8 into their state, with producers interested in that market involving vets in conducting necessary testing and biosecurity planning.”

JD remains an internationally and nationally notifiable disease, meaning any findings of JD in livestock are to be reported to government authorities. With deregulation this should no longer result in quarantining, but CCA’s message is that it is  important that producers understand what options they have available if JD is found in their livestock.

More detailed information about the J-BAS system can be found on the AHA website (www.animalhealthaustralia.com.au) or by ringing Cattle Council of Australia.