Which diseases have the biggest impact on Australia’s beef cattle industry?

Which cattle disease has the biggest economic impact on Australia’s beef industry?

A systematic review recently completed for Meat & Livestock Australia has calculated and ranked 17 diseases in terms of their economic cost to Australia’s beef cattle herd.

The report – A Priority list of endemic diseases for the red meat industries – ranks various ‘priority’ diseases based on their cost of treatment and prevention and the production losses they cause.

The research involved surveys and discussions with a wide range of industry stakeholders from producers through to processors and animal health companies.

The report is the result of a project commissioned by MLA to fill a gap in current information on disease impacts. Its results will be used to inform and guide research, development and extension activities in future.

The report’s authors emphasise that some of the results are based on subjective assessments and the outcome “is more a qualitative ranking than an absolute measure”.

However they say that the report’s findings will help MLA to consider the most appropriate research, development or extension strategy to assist the livestock industries to better manage diseases.

The below chart shows how the 17 cattle diseases considered by the consultants were ranked in terms of their economic impact: 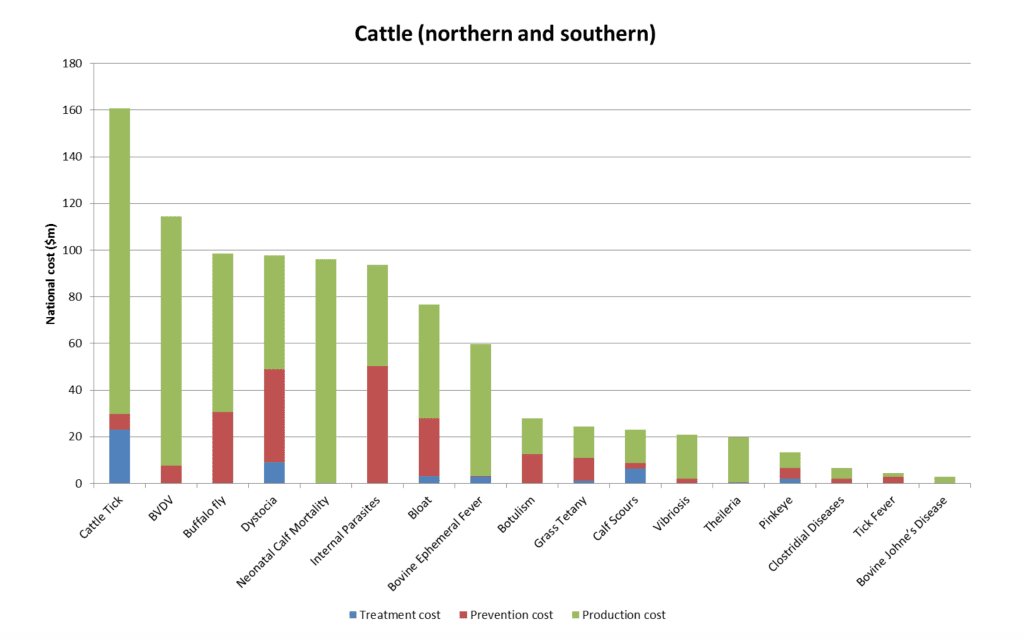 Here’s what the report says about the five highest impact diseases:

Cattle ticks cause anaemia in cattle and are also the vector for three tick fever organisms in Australia. Cattle tick infestations impact on weight gains of affected cattle, on conception rates and devalue hides. Increasing Bos Indicus content is associated with higher resistance to tick attachment, but even within Bos indicus cattle there is a substantial variation in resistance, the report stated.

The use of acaracides to control ticks and quarantine measures to protect tick free zones contribute to the high costs caused by ticks.

The reported noted that an efficacious first-generation vaccine was available for a short period in the 1990s, but no new vaccine has since become commercially available.

The various strains of BVDV in Australia cause conception failure, early pregnancy abortion and mortality of PI calves, of which approximately 50pc die by weaning age, while approximately 50pc of surviving calves die annually thereafter. The virus can also weaken the immune system and increase the incidence of infected animals contracting other diseases.

The virus is spread mainly by direct contact with persistently infected (PI) animals.

Costs associated with BVDV include prevention efforts through vaccination and culling of infected animals.

The report’s authors note that the real impact of BVDV exceeds the perceptions of many beef producers and veterinarians.

“Much of this perception is derived from the apparent low visibility of the PI mortality rate and impacts on pregnancy rates that have been reported in domestic and international studies,” the report states.

The blood sucking buffalo fly can only survive by 10-40 daily feeds, and in strong infestations can average 1000 per animal. Impacts include welfare issues, weight loss in affected cattle and skin lesions that can effect hide value and suitability for export.

An estimated 70pc of cattle in areas affected by buffalo fly (loosely defined as eastern Queensland, northern NT and WA and north eastern NSW) have some form of prevention control applied, with costs comprising $1/animal/month on average.

Dystocia is most commonly due to foetal-maternal incompatibility – where the foetus is relatively or absolutely too large to fit through the maternal pelvis – often resulting from mismating (heifer too small, poor bull selection), overlong gestations and/or (most commonly) inadequate nutrition in growing pregnant heifers. The survival of calves to weaning following a difficult calving has been estimated to be 12pc less than calves born normally.

The costs of Dystocia are greater in the north than the south due to the more extensive nature of northern operations and the impact this has on the ability to effectively monitor calving stock. The estimated annual cost of Dystocia in the report does not include the use of selective genetics and better nutrition to prevent Dystocia because the benefits from these practices extend beyond just Dystocia prevention

5. Neonatal calf mortality of unknown cause

The cause of these losses is largely unknown, the report states.

“The aetiology of neonatal loss in excess of ~5-10% has remained largely unknown in northern Australia, though recent research has shown the major risk factors to be behavioural, nutritional, managerial and environmental (Fordyce et al. 2014).

“Insufficient milk production and delivery and inadequate calf suckling are hypothesised to be how these risk factors mediate their effect.”

RELATED ARTICLE: Is the Johne’s pain worth it?