When cars and cattle collide, who is responsible? A CATTLE farming couple in New Zealand was last month ordered to pay $273,000 after a truck collided with 17 of their black cattle which had strayed onto a busy highway on a dark night.

The owners of the truck took the cattle producers to court for damage caused to their vehicle, claiming the farmers had failed to properly secure their stock.

In their defence the farmers claimed the steers had jumped over a boundary fence.

Their lawyers also told the court the truck driver, who was uninjured in the crash, was visually impaired, having lost an eye several years earlier, and had been driving above the speed limit and was talking on a mobile phone with his wife when the crash occurred.

After considering the evidence, which included feedback from experts as to whether cattle are physically capable of jumping fences  (some believed yes, others no), the court ruled the farmers had breached their duty of care to adequately secure their cattle and ordered them to pay for $273,000 to the owners of the damaged truck and trailer. 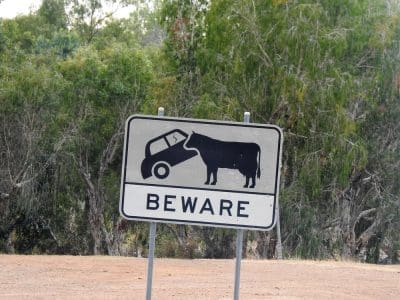 The New Zealand case raises questions about the situation in Australia – who is liable for damages resulting from vehicles colliding with livestock that on public roads in Australia?

The various sources we could find indicate that most Australian States have laws which hold the owners of livestock legally liable in such circumstances.

The notable exception is Queensland, where an old English law which gives cattle the right of way over vehicles on public roads still holds sway (more below).

A similar case to the New Zealand incident occurred in New South Wales in 2016, in which a Gosford man was awarded over $1 million in relaiton to an accident which involved cattle straying onto the Pacific Highway.

The court heard the man rounded a blind bend on the highway when he encountered the cattle on the road. He applied his brakes to avoid hitting the stock but his car was hit from behind by a car towing a boat. The accident pushed his car into one of the cows, and the court was told he suffered head, neck and psychological injuries as a result of the accident.

The owner of the property from which the cows escaped did not admit liability.

Evidence tendered against the property owner included a letter from his local Council which confirmed his cattle had been seen on the highway previously, and he had been sent a letter just six days before the accident occurred, ordering him to fence his boundaries to an appropriate standard.

In handing down his ruling the judge said a reasonable person in the livestock owner’s position would have taken precautions against the risk and his negligence had led to the occurrence of harm.

In Victoria, the State’s Department of Agriculture says livestock producers must ensure their animals do not wander onto roads where they can create a serious road safety issue. It also notes that local councils have the power to issue notices to confine stock and improve fencing to ensure it is sufficient to confine livestock.

Summaries of the status of these laws in Australia, such as this parliamentary research paper, indicate that for some years after mechanised transport began to appear more commonly on public roads in both England and Australia, livestock were deemed to have right of way over vehicles.

This common law rule was affirmed by the English House of Lords in 1947 in the case of “Searle v Wallbank’, in which the plaintiff was seriously injured when he was struck by a horse that had escaped from the defendant’s property.

Evidence was tendered that the fence surrounding the defendant’s property was dilapidated, and there were gaps through which an animal such as a horse might pass.

However, the House of Lords found that a landowner was under no duty of care to fence their property in order to avoid animals escaping.

The law had the effect that, as summarised in this Deakin Law Review article, “a landowner has no legal obligation to fence their property so as to avoid animals not known to be dangerous straying from the property, and so causing danger to road users and others”.

The original justification for the rule was that in early times of mechanised vehicles few roads were fenced off from adjoining land, and it was deemed that compelling livestock owners to prevent stock from straying was a considerable imposition. It was also taken that road users accepted the risks inherent in road travel, including the presence of straying animals.

The law was removed in England and all other Australian States in 1971,  but not in Queensland. Since that time there have been various ultimately unsuccessful attempts by people who have suffered loss or damage to overturn the law. 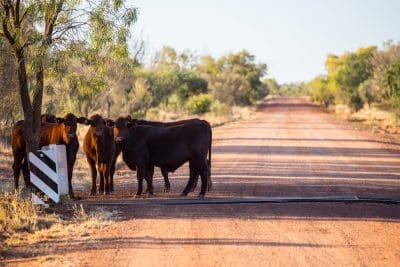 The RACQ has previously called on the Queensland Government to investigate the most appropriate ways to frame new legislation that recognises both the impracticality of fencing all of Queensland’s extensive pastoral holdings, but enables road users who suffer personal injury or property damage caused by straying stock and arising out of proven negligence of the stockowner to be entitled to fair compensation from the owner.

Any change in law should also take into account the need for road users to exercise all reasonable care when travelling in remote areas where properties are unlikely to be fenced, the RACQ said. 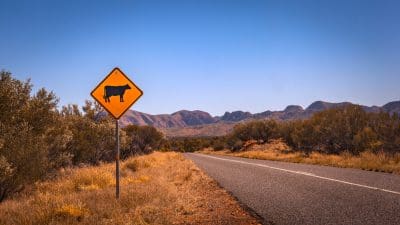 It also suggested the Queensland Government consider the relevant Western Australian legislation, which it says gives courts the power to decide liability under the general laws of negligence, but also place a cap on liability.

It is also worth noting that in contrast to prevailaing State legislation local council by-laws can also hold landholders responsible for confinding livestock.

As one example the Gladstone Regional Council states that livestock owners are bound by law to provide proper enclosures and to prevent animals from wandering or escaping, and straying can be impounded by the council and released only after payment of set fees.

The Queensland Law Reform Commission brief written in 2010 suggested that if Queensland does move to change the law in future, any proposal should consider competing rural and urban interests, comprehensive road traffic statistics on motor vehicle accidents involving livestock, and research into the costs of fencing and of public liability insurance.