As well as being a successful commercial cattle producer in the state’s north, he maintained a lifelong love of breeding seedstock animals, both beef cattle and Thoroughbred horses. 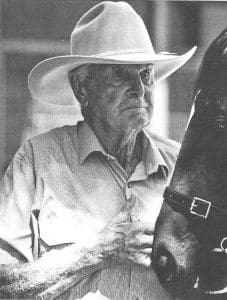 Following secondary schooling at Hale School in Perth, Dick went to the “The Grange”, on the Irwin River, then owned by his grandmother, Francis Mitchell. Soon after, he enlisted in the RAAF in World War II being discharged in 1945 when he returned to The Grange.

With just 200 pounds in his pocket he took up horse breaking and share farming. In 1950, a war service loan allowed him to acquire ‘Tanga’, a 700ha farm at Toodyay.

In 2017 Dick received an Officer of the Order of Australia (AO) medal in the Queen’s Birthday Awards for distinguished service to the beef cattle industry, including internationally and to Thoroughbred horse breeding and racing industry.

Dick was a very early breeder of Simmental cattle in Australia and a leader in the establishment of the breed. He established the Hamelin Park stud near Williams, WA, which was a leading Simmental stud herd for more than a decade until it was dispersed to breeders in every mainland state in 1991.

Dick was on the Federal Council of the Australian Simmental Breeders Association with six terms as President. He was also on the World Simmental Federation for 12 years serving as president for three years.

He was a member of the National Beef Recording Scheme (NBRS) Advisory Committee for a number of years in the late 1970s and early 1980s. NBRS was in its formative years and benefited greatly from his practical advice on organisational structure and strategies.

Today the NBRS and its BreedPlan genetic evaluation tool are accepted as world leaders. The technology is now used in 15 countries around the globe.

In the early 1980s the Agricultural Business Research Institute was involved in trialling the computer-aided sale by description of livestock. This was a ground-breaking project – essentially offering online livestock sales platform more than four decades ago.

Dick saw the trial system in operation and immediately took steps to have it introduced in Western Australia under the name, CLASS. This gave WA livestock producers an opportunity to use this advanced technology for three years before the national scheme called CALM (now Auctions Plus) was introduced.

Given the huge distances involved in the supply chain of livestock products in WA, this technology has provided the opportunity to achieve economies in transport of livestock to abattoirs, better animal welfare outcomes and higher meat quality. It was only through Dick’s sheer enthusiasm about new technology, his reputation for picking winning projects and his detailed knowledge of the agri-business environment in WA that this opportunity materialised.

The Australian Registered Cattle Breeders Association (ARCBA) was formed in the early 1970s to provide a national voice of breed associations in areas of common interest such as Government policy initiatives, disease control, showing standards and so on.

The concept was good, but the execution poor. In 1979 Dick was elected as President and found that ARCBA had just 12 breeds as members, no money, no well-articulated program of activities and used the offices of one of its members as its headquarters to save money.

In the first two years of his term as President he increased membership to 35 breeds (essentially all those in the industry representing about 13,000 registered breeders), increased membership fees so that the Association had adequate financial resources for an ambitious program, transferred the headquarters to the University of New England, appointed a breed-independent Executive Director  and had the Constitution changed so that future Presidents would be distinguished breed-independent appointees.

Many of these changes were considered radical at the time but in hindsight they proved to have been very wise and added materially to industry organisation and wealth nationally.

He was renowned as a cartoonist and raconteur. His great sense of humour and lateral thinking were the salvation of many an industry meeting which could otherwise have bogged down on trivial issues

In later years Dick continued to breed Thoroughbreds on De Grey Park at Capel, from which he produced Group One winners, and Droughtmaster cattle on another property in WA’s South West.

Despite being in his 90s, Dick continued to derive great satisfaction from both applying his experience and intellectual skills to the elusive goal of breeding the “perfect” animal and the arduous physical management of his animals through to sale.