THE 2016 Australian Intercollegiate Meat Judging competition which concluded over the weekend has been won by a team of students representing the University of Queensland.

In a first for the university over the competition’s 27-year history, the UQ team claimed first place with a score of 4306 points out of a possible 5020.  Not far behind on 4299 pints was the University of Sydney team, followed by Murdoch University, third.

The students were supported by 35 coaches accompanying the various teams. The event was hosted by Charles Sturt University in Wagga Wagga. 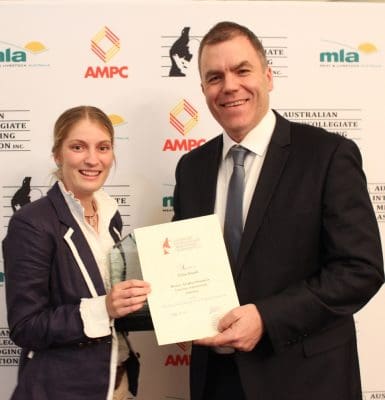 Teys-Cargill Australia general manager of corporate affairs, Tom Maguire – also a director of the Australian meat Processor Corporation – presented the individual champion award, the AMPC Founder’s Buckle to Chloe Gould from the University of Queensland team. Just a point behind was this year’s runner-up in the individual assessor stakes, Leah Parsons from Garden City Community College, US.

The competition was so close this year that just four points separated the first five individual places. Mr Maguire noted the importance of ICMJ for securing future talent in 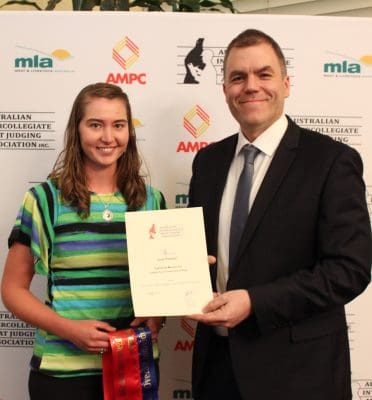 the Australian red meat industry and such a close contest typified the caliber of young people coming through the system.

Within the ICMJ competition, students are required to judge beef, lamb and pork carcases and primals, along with identifying a range of beef primals and beef, lamb and pork retail cuts. The judging of carcases and primals is based around yield, muscling and quality to evaluate their retail value. The beef contest was hosted by Teys Australia while Rivalea Australia and JBS supported the small stock contest held at the CSU campus. Prizes for the various categories were widely spread amongst the Universities, creating an awards evening full of suspense to the very end.

Sheepmeat Council of Australia offered scholarships this year for three students to attend the premier lamb industry conference, LambEx, being held in Albury during August. The successful applicants were awarded based on the quality of their submissions and how well they performed in the lamb section of the event.

The recipients were Max Edwards from the University of Sydney, Kira Batterbee from Murdoch and Emma McCrabb, UNE.

Beyond the contest itself, this year’s ICMJ conference program, opened by AMPC’s Estelle Lifran, attracted an impressive line-up of industry presenters. The seventeen industry speakers throughout the week provided inspiring and eye-opening insights into opportunities for graduates in the meat and livestock industry spanning areas of production, genetics, processing, and new technologies.

“This year’s program really exemplified the growth of the program over the past 27 years, and showed the professionalism of the students that the program has produced over this time,” ICMJ president Dr Peter McGilchrist said.

“The calibre of this year’s participants showed the passion that young people have for the meat and livestock industry and the enthusiasm that they have for driving the industry forward into the future. The international contingent, with teams from the US, Japan, Korea and Indonesia, allowed students to interact and learn from some of Australia’s major trading partners, building networks for the future,” he said.

“The theme of this year’s contest was ‘Let the meat industry take you places’, and the international alliances developed throughout the week will help more students go on to bigger and better things in the industry,” Dr McGilchrist said.

The objective of ICMJ is to lay strong foundations for agricultural industries by educating and injecting enthusiastic graduates into a range of diversified careers in the meat and livestock sector.  Mr McGilchrist said the industry had a bright future with the ICMJ participant students entering the industry on a professional level over the coming years.

“The success of ICMJ would not occur without the continued support of our major sponsors, including MLA, AMPC, APL, Teys Australia and Coles,” he said. Ten students were selected from the competition to undertake a five-day Meat Standards Australia training course in Brisbane later this year, where they will receive a comprehensive introduction to the Australian meat processing sector.

Click this link to view all team and individual results.