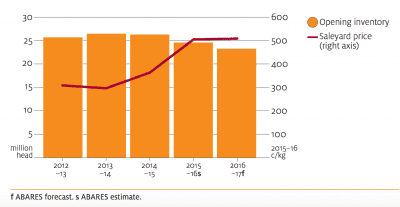 Opening inventory and weighted average saleyard price of beef cattle, 2012–13 to 2016–17. All charts from ABARES. Click on charts to view in larger format 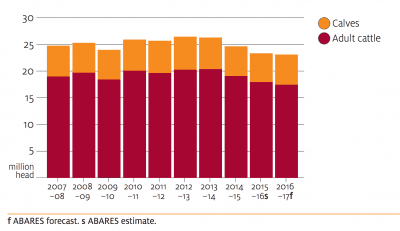 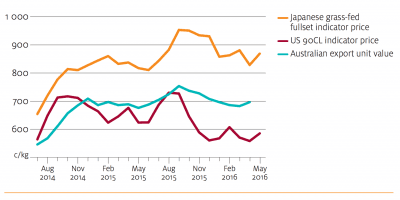 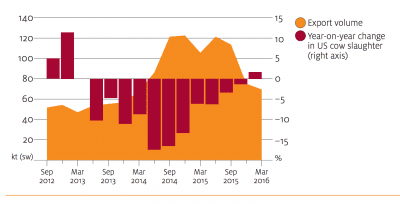 Year-on-year change in quarterly US cow slaughter and Australian beef exports to the United States, September 2012 to March 2016.

Australian saleyard cattle prices will be pulled in opposite directions by supply limitations and diminishing export returns in the next 12 months, according to ABARES’ mid-year market outlook statement.

On the other hand, increased supplies in primary export markets will continue to exert downward pressure on Australian beef export prices.

The supply side is set to win the price tug-of-war in the short term, ABARES’ latest price forecast, released this morning, suggests.

The weighted average saleyard price of cattle is set to finish the 2015-16 year at 505c/kg, a massive 41 percent higher than the previous financial year. (And well above ABARES’ prediction one year ago of a 425c/kg price average).

The increase in herd rebuilding activity has given ABARES reason to believe saleyard prices will rise a further two percent this year to average 517c/kg in 2016-17.

However it notes that the impact of downward pressure being exerted on Australian beef export prices has already been felt in the market.

After reaching a peak of 535c/kg in September last year, when widespread rainfall across eastern Australia triggered a surge in restocker demand, saleyard prices then began to fall away, dropping by about 10pc to a level of 480c/kg in April this year.

The decline largely mirrored a corresponding 8pc fall in average export unit values for Australian beef and veal between September 2015 and April 2016.

A forecast increase in beef supplies to Australia’s major export destinations from other sources is expected to continue to place similar downward pressure on Australian beef export prices in 2016-17, ABARES says.