David and Prue Bondfield, Ben Noller and David Smith from Palgrove Pastoral Company Pty Ltd collected a swag of awards with their Charolais and Charolais Ultrablack cross steers including the Sturrock Trophy for overall winners of the 100 day export class. Click on images to enlarge. Wagyu steers exhibited by Richard and Dyan Hughes, Wentworth Cattle Company, Clermont, took the major honours in the 2019 Wagyu Challenge, while Shorthorn steers from Spencer and Godfrey Morgan’s The Grove at Condamine, outperformed all other entries in the new HGP-free class. The winners came from a field of 889 cattle entered across the four sections this year, the largest number of entries since 2015 according to the RNA, a strong indication of the value in which the feedback and data obtained from the competition is held even in the middle of a severe drought gripping vast tracts of eastern Australia. The RNA Paddock to Palate competition is three-phased, comprising best aggregate weight gain; a carcase competition and an MSA eating quality competition, while the 2018/19 Wagyu Challenge is four-phased, finishing in a beef taste off judged by some of Queensland’s top chefs.

For the second year running purebred Charolais cattle from Palgrove Pastoral Company have taken overall honours in the 100 day export class to win the Sturrock Trophy.

In fact Palgrove entries took both first and second places overall in the heavily-contested 100 day class, reinforcing the commercial might of the Palgrove cattle and bloodlines. A pen of Angus cross cattle bred by Russell Pastoral Company at Champion Station near Blackall built on a strong performance in the weight gain section to finish third overall in the 100 day export class.

In June a pen of six Palgrove Pastoral Company steers won the weight gain section of the 100 day competition with an average daily gain of 3.095kg.

Palgrove Pastoral Company also had strong success with its Charolais Ultrablack Cross cattle entered in the HGP-free section, claiming the award for champion carcase in the class, and third place in the HGP free pen of six carcase value competition.

The class was won on overall aggregate points across all three sections by Charolais steers from the Millner family’s Rosedale Livestock Partnership, Blayney, NSW, which had earlier won the class 38 pen of six carcases, reserve champion carcase and second and third places on eating quality points.

Michael and Jenny Millner and son James and Robbie sell Charolais bulls and composite bulls (Charolais/Angus and Charolais/Shorthorn) in addition to running a large commercial cattle operation on properties at Blayney and Dubbo.

Rosedale Charolais cattle have won numerous major cattle competitions in NSW including the Australian National Field Days steer competition, Beef Spectacular and Sydney Royal Beef Challenge, but James Millner told Beef Central this win in one of the nation’s toughest and most strongly contested cattle competitions was a major reward. Paul McNicholl, brother of Lee McNicholl, accepts the award for second overall in the 70 day trade class on behalf of the McNicholl Family Trust, with JBS’ Steve Groom and RNA Councillor Gary Noller.

Second overall in the trade class was a line of Angus cross steers produced by Dulacca commercial cattle producers Lee and Megan McNicholl from the McNicholl Family Trust, which amassed further points in the carcase and eating quality section after winning the weight gain section of the class with an average daily gain of 2.951kg.

Third in the class was a pen of Shorthorn exhibits from Godfrey and Spencer Morgan, The Grove, Condamine, which also performed very strongly the new HGP free class (see below).

The champion carcase in the 70 day trade class was also won by a straight Charolais, exhibited by Grafton based stock and station agent Ray Donovan.

Richard and Dyan Hughes Wentworth Cattle Company from Clermont was the major winner in the third annual Wagyu challenge, winning the beef taste off and placing second in the pen of six carcases to take first place in the overall standings. 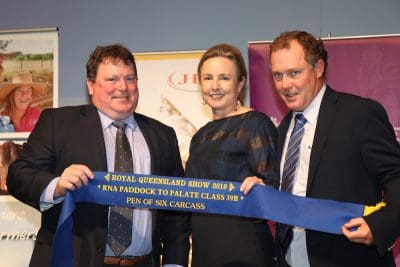 Hamish and Mary McIntyre from McIntyre Agriculture Pty Ltd, St George, wore out plenty of shoe leather returning to the stage repeatedly to collect awards, both in the Wagyu Challenge and in the eating quality section of the 100 day export class (more below).

After winning second and fourth places in the weight gain section of the brand new HGP-free 120 export class in June, with ADGs of 2.517kg and 2.505kg/day, The Grove’s Shorthorn steers went on to dominate the class after the carcase and eating quality scores were taken into account. In third place was a pen of Speckle Park X Angus exhibited by Dennis Power of Minnamurra Pastoral Co from Coolah in NSW.

Class 38B Pen of six carcases:

Class 39B Pen of six carcases:

Class 39D Beef Taste-off Competition:
(Cut from striploin is cooked by QDAF Scientists and tasted by panel judging panel including some of Brisbane’s top Chefs)

For winners in the weight gain section announced in June click here to view our earlier article. 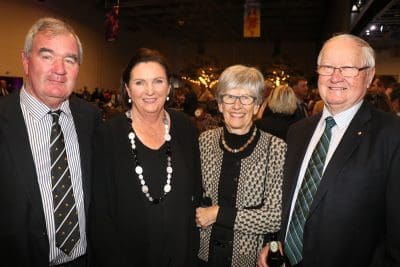 Jon and Bindy Warby and Margot and Allan Warby