Paddock to Palate: Champion Station cattle live up to name A selection of Angus cross steers produced on Russell Pastoral Company’s Champion Station at Blackall, similar to those that achieved the second highest average daily gain in this year’s weight gain section of the RNA Paddock to Palate commercial cattle competition.

IT would seem to go hand in hand that a property called Champion Station would produce champion cattle.

That has certainly been the case for the Russell Pastoral Company-owned breeding operation at Blackall, as results from the annual RNA Paddock to Palate contests attest.

Angus cross steers produced on Champion Station have consistently performed well in the years they have been entered into the competition, but this year achieved a best-ever performance.

Champion Station’s pen of six steers produced an average daily gain of 3.003/kg per day to take second place in the 100-day export category, just behind the winning Palgrove pen which produced 3.095kg per day.

While more than 30 individual steers from a range of exhibitors cracked the 3kg/day average daily gain mark, this year only the Palgrove and Champion Station entries achieved that average across their entire pens of six steers, from the 56 individual exhibitors involved.

General Manager Adam Armstrong said the company was ecstatic with the result, which, like this year’s other major winners, has come during a run of particularly challenging seasonal conditions.

Russell Pastoral Company is a famous name in Australian agriculture, once among the largest pastoral landowners in the country, with properties spreading from Bourke and Enngonia in NSW to Cunnamulla, Roma, Dalby, Jimbour, Clermont and Blackall in Queensland.

At the peak of its scale the family-owned company produced Queensland’s largest wool clip and was the biggest grain grower on the Darling Downs.

Today the Russell Pastoral Company is still owned by the Russell family and has operations centred around two prime agricultural aggregations: 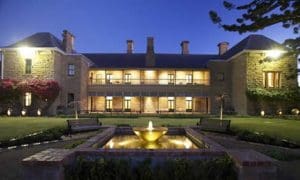 The heritage-listed homestead on Jimbour Station, which was one of the earliest stations established on the Darling Downs.

– Jimbour Station at Jimbour on Queensland’s Darling Downs, which today comprises 4500 hectares of prime Jimbour Plain chocolate soils for cropping basalt country for grazing and fodder crops, which is used for grazing and the production of fodder. Jimbour Station runs approximately 500 high quality Angus and F1 Wagyu females for use in F1 and F2 Wagyu cattle production, and also backgrounds up to 2000 steers and cull heifers turned off from the Champion aggregation. 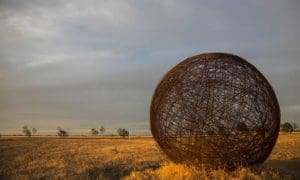 – Champion Station, located 60km north east of Blackall, a well-developed 55,000 hectare aggregation incorporating Harden Park, with two thirds pulled brigalow/gidyea country sown to Buffel, running into Box and Broadleaf Iron Bark forest with some desert country. The aggregation runs a breeding herd of over 4000 Angus cross cows, the basis for a constant herd of about 7500 head.

In 2007 when Mr Armstrong joined the company, the herd had a good quality Braford/Shorthorn base, and was renowned by lot feeders who sought them out as good performers.

But, as later maturing cattle, most of the growth benefit was enjoyed by the lot feeders, less so by the operation itself.

Mr Armstrong introduced predominantly black bulls, but also some Charolais and Droughtmaster bulls, across the Braford/Shorthorn breeding base to harness the growth potential delivered by hybrid vigour.

“We put in different breeds that had the traits we wanted to focus on, being higher margin, market desirability, fertility, growth and ability to perform in both good and tough environments,” he explained.

“Our primary emphasis was on Angus bulls to deliver the fertility, earlier maturity and access to higher margin markets, but maintaining the growth rates of the Charolais, and the Droughties for use across the maiden heifers and additional western environmental adaptability overall.

“The mix we have developed over the last 12 years has been about ensuring very high quality, highly fertile, growthy animals that perform at high levels along the whole chain.

“The feedlotter still loves them, but now all the stakeholders share the benefit”

“The feedlotter still loves them, but now all the stakeholders share the benefit.”

The aim on Champion Station is to turn off steers at feedlot entry weights averaging around 430 to 440kg for 100 day grain feeding programs, but this year’s dry conditions meant selling much earlier at weights in the high 300kg range.

In dry years the policy is “to go hard early” and turn off young cattle at lighter weights to preserve the maximum feed base possible so that the breeder base has sufficient grass to get them through winter.

Mr Armstrong said the policy has stood the operation in good stead during the recent run of dry years.

After being forced to buy hay from as far away as Victoria during January and February, a much needed 200mm reprieve brought by Cyclone Trevor at the end of March provided relief and averted what was shaping as a desperately difficult winter this year.

Mr Armstrong said the steers that produced the 3.003kg average daily gain in this year’s Paddock to Palate weight gain section were selected from the normal run of steers produced on Champion Station.

“Those six steers were peeled off a bigger mob of steers that were going to Mort & Co,” he explained.

“We obviously draft them on type that we thought would perform, but they really were run of the mill and pretty typical of our normal turnoff.”

Asked for his thoughts on producing high performing cattle, Mr Armstrong said the operation doesn’t aim to buy the most expensive bulls, but targets bloodlines that it knows perform in its specific conditions.

“We have tried a lot of different Angus lines, and have had different levels of success with their durability in that type of environment (at Blackall), but the most successful bloodlines we have had to date are Team Te Mania and Booroomooka.

“We find that as these bulls survive and do the job and produce the progeny.”

Nor could you beat the advantages provide by hybrid vigour in the western Queensland environment, he added.

“You have got to breed not only an animal that performs in a good season but one that survives and still performs in a tough one,” he said.

“And hybrid vigour is certainly something that we keep stirring that pot that helps us there.

“I think you do have to be discerning with the sire lines you are using to make sure you are really maximising the traits that you are looking for, which from our perspective are growth, fertility and adaptability to a tough environment.”