Red meat white paper: Where is it up to, and what’s next?

WORK to streamline and modernise Australia’s red meat industry leadership and levy bodies is making clear progress, but it is still unclear if 2020 will be the year long-sought industry reform is achieved. 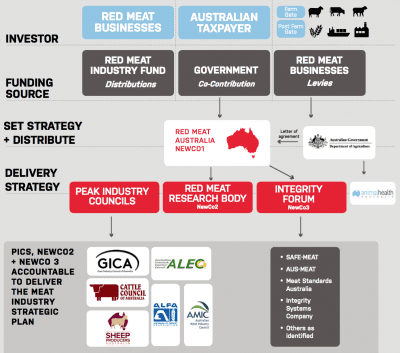 The current position is that there is broad industry agreement supporting the development of the so-called NewCo 3 component of the white paper restructure plan, which was recommended by an industry panel tasked with reviewing the red meat industry’s Memorandum of Understanding last year.

NewCo 3 will bundle together all of the red meat sector’s integrity systems, such as Aus-Meat, Safemeat, MSA and NLIS, into a single, streamlined entity. Price Waterhouse Coopers is currently working with RMAC and industry bodies to lay the groundwork for this restructure.

Broad industry agreement is still yet to be secured in support of the NewCo 1 (a single body that would receive and manage all red meat industry levy funds and matching Government funds and advocate for the red meat sector) and NewCo 2 (a single red meat service provider, combining MLA, AMPC and LiveCorp).

Similar roundtable meetings have been held in Canberra yesterday and today, as part of broader meetings in the national Capital focusing on the implementation of the Red Meat 2030 Strategic Plan, which takes effect from July 1. 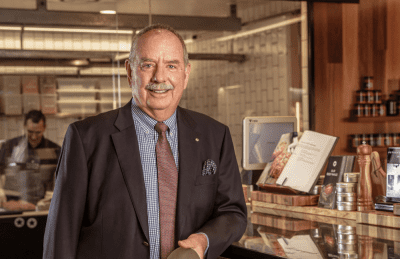 RMAC independent chair Don Mackay told Beef Central there is some agreement but also some opposition to the amalgamation within RDCs.

“I think there are more prospects for a model to work but there is a fair bit to be done yet,” he said.

Navigating through changes such as amalgamating RDCs is complex process. The lack of agreement so far means some of the target dates for the reform process nominated in the white paper, such as the implementation of NewCo 1 by July 1, 2020, will clearly not be met.

He said his message to the various red meat bodies is that while the industry needed to be mindful of “not doing something it should not”, it also should be equally mindful of both the Government and Federal Opposition’s stated interest in getting on with agricultural reform.

“The message to industry members is you have got to be part of this process, or it will get done to you,” he said.

Mr Mackay said the first two roundtables in December have already led to some adjustments to the proposed restructure model, which RMAC has articulated through communiques posted on its website after each event.

The role of levy payers in determining funding and priorities for levies paid, enhancing the industry’s ability to have a strong cohesive whole-of- supply chain view on policy development, and prosecuting its case with Government, have been underlined as guiding priorities.

“It is a matter of making sure the clearest line of sight to levy payers and having the influence to the degree that they are entitled to have influence,” Mr Mackay said.

“One of the mistakes that people make is once the levies are paid, they’re then the property of the federal Government and they are allocated to organisations who undertake research and marketing and Animal Health Australia and the National Residue Survey.

“Some levy payers have a view that they still own the money. But that is just not true. The fact there is a mechanism by which they can influence the expenditure of that money in areas that are best suited makes common sense and makes sense from a Governance perspective as well.

“But the independence of that process is very important, because obviously we know it has matching funds. Some people say it is all our money and we’ll tell you where to spend it, but, to be honest, it is not.”

Presuming industry discussions settle on a reform model that has general agreement among the various peak industry councils and RDCs, the resulting plan will then need the support of the Federal Agriculture Minister of the day to put into effect.

It is still unclear what process would then need to be undertaken for the Minister to support large-scale industry change.

The green paper and white paper stages have given every stakeholder the opportunity to provide input into the reform process.

That may be adequate to satisfy the Minister that the final restructure model is a representative view of the broader industry, or the Minister may require further stakeholder consultation before being prepared to back significant industry reform. At this point Minister McKenzie has not publicly indicated what steps would be taken if and when a reform proposal agreed to by industry bodies is presented to her.

In recent years previous Federal Agriculture ministers have told industry that major reforms will not be supported unless they are backed by industry-wide consensus.

That is a high – and some would say impossible – bar to clear, and one that has stifled previous attempts at industry reform, allowing individual stakeholders to block change whenever their specific requirements are not satisfied.

‘You will never get consensus’

Mr Mackay stands firmly on the side of pragmatism in order to achieve long-awaited industry reform.

“The one thing that can’t and won’t happen is we can’t spend two years trying to gather consensus because that is not going to happen,” he said.

“You will never get consensus.  Do you get consensus by volume of cattle or by numbers of people, what does that look like? We have trouble identifying levy payers as it is.

“At some point leaders have got to lead and we have to gather as much support as we can, make some judgements about what is the best thing or the future and get on with it.

“It will never be universal and I am not looking to be universally popular with this, I want to see the best outcome whatever that is, I don’ t have a fixed view, and we will move forward from there.

“So there will be an implementation committee which will be drawn together by high quality people, to undertake a process of looking at, ‘well if you do this, what does that mean and how do you do it’.”

Current sticking points include concerns by RDCs they may get swallowed up, in terms of how their levy-payers money is spent.

“The only way you can deal with that is to make sure that in any model you build that people who are paying the money are satisfied that the model works,” Mr Mackay said.

“At the same time there will be clearly benefits in administrative costs, there are benefits in removing duplication and triplication, there are a whole lot of reasons why people are supportive of it, so that is why there has to be a process to make sure you don’t do something that you regret.”

Another view being expressed in rountable discussions is that the industry does not need a big organisation like NewCo 1 overseeing it, and the existing structure of current bodies advocating for their individual sectors with RMAC in a coordinating role should be maintained.

“The view that was gathered during the white paper process was that stakeholders wanted a stronger more better funded organisation,” Mr Mackay said.

“One of the problems we have of course is that the money is in MLA, but MLA does not have the remit to undertake that advocacy and policy development role.

“So the needs and responsibilities for that are in one place but the money is in another.”

But one clear exception has always stood in contrast to that position.

That is Australian Pork Limited, which is responsible for managing pork producer levies for research and marketing purposes, while also serving as the pork industry’s peak policy development council and industry advocacy group.

This may be open to challenge from people more familiar with its operations, but there does not appear to have ever been a public example of APL having been deemed to have misused its position aor having used levy funding inappropriately for agripolitcal activity.

For the  NewCo 1 body (or Red Meat Australia as it has been initially labelled) which was recommended in the white paper to be developed, it would require the Government to take the view that policy development is a legitimate use of levy funds, while also allowing NewCo 1 to operate as an advocacy body as APL does.

“Any model we would seek to build would have the capacity in my view to utilise some levy funds to undertake that work,” Mr Mackay said.

“A lot of producers particularly in the cattle sector have said we have paid our money, that is enough, use that to do all these jobs.

“Some of them misunderstand what it can and cannot be used for, but I think the limitation on the use of levy funds for policy is a factor of the Statutory Funding Agreement, not the legislation, and the SFA is renewed every year, so can be modified.

“I think there is a general view that with APL, the sky didn’t fall in, and there is a legitimate use for having a good organisation that can provide good policy. From a governance perspective, a good strong organisation that leads, and does not need to be dictated to by Government who will come and solve problems after the event, the Government would be very happy with that.

“So I think all these things can be done. Any people who are anti any change will find reasons why something might happen, but you just have to build a model where that doesn’t occur.”