In this week’s third article highlighting the purpose and achievements of the Intercollegiate Meat Judging movement, Dr Peter McGilchrist discusses some of the valuable international exchange the program fosters.

With increasing pressure on beef production from the environment and environmentalists; the ever changing strengths and volatility of world economies; the ever-moving targets for product specifications and compliance coupled with increased commodity prices and the growing demand for red meat, it makes for an exciting and challenging future for the next generation of meat industry leaders. 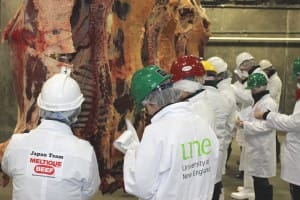 The next generation of leaders are descending on Wagga Wagga, NSW this week for the 25th Intercollegiate Meat Judging conference, workshop, careers expo and competition. Teams from ten Australian universities and agricultural colleges will be joined by teams from Japan, Korea, Indonesia and the US.

With trade conditions like those we have seen over the past 12 months with record after record being broken for weekly kills and export volumes, Australia’s reliance on export markets is clear to the world.

Some might argue that Australia gets itself into a vulnerable position with such large reliance on export markets but no-one would argue that solid relationships and linkages with importers/retailers in these countries are the key to success and longevity.

The building of sound, trustworthy relationships is something that can take decades.

Long-time committee member of ICMJ and international researcher, Professor Peter Wynn has for many years stressed that “the ever-expanding market for our beef throughout Asia necessitates the development of close links with personnel associated with the commercial beef industry in each country.”

“There is no better way to build these bridges than by attracting young participants from these countries to participate in our ICMJ training workshop and learn about the excellence of the various sectors that comprise our industry,” Professor Wynn said.

The Japanese national team was the first international team to travel to Australia to attend the 2006 conference and competition closely followed by the first US team, from the University of Illinois, in 2007. Teams from these two important export markets now attend annually and have since been joined by teams from Indonesia, Pakistan and Korea in 2013.

“Participation of students from across Asia provides a means to an end,” he said.

While building relationships from a marketing perspective is immensely important, constructing links between renowned and fledgling researchers in the field of meat science around the world is also a fundamental role of ICMJ. 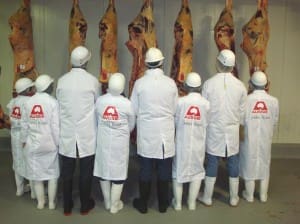 With the world population continuing to grow rapidly, combined with the ever-increasing demand for improved quality in production and processing and the change in demand for environmental sustainability, this presents an interesting time for the beef industry.

Through increased collaboration between global scientific and industry based research and development organisations, solutions to these issues can be accomplished.

The ICMJ program that Australian and international students will take part in this week is ideal for the exchange of scientific information, technology and experiences between academic researchers and industry delegates.

The breadth of visiting scientists over the years presenting at ICMJ has also been immense including Professor Gary Smith from Colorado State University, Professor Keigo Kuchida from Japan, Dr Linda Farmer, internationally renowned flavour scientist from Northern Ireland and Dr Mark Miller from Texas Tech University to name a few.

The line-up of presentations and workshops at this year’s ICMJ event is again nothing short of exceptional (click here to view program) with so many people taking time out of their hectic schedules to influence, challenge and enthuse the next generation of leaders for the meat industry.

The ICMJ event with culminate with the APL small stock competition, Teys Australia beef competition and the Coles presentation dinner.

Click these headlines to view the earlier articles in this series, published over the past two weeks: 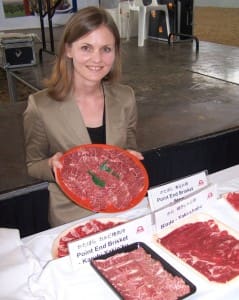 Since your involvement with ICMJ, what career path have you followed?

ICMJ opened up a whole new world for me. I found the meat industry dynamic and exciting, and the experience with ICMJ encouraged me to pursue my goal of learning Japanese and working to expand exports of Australian beef and lamb to the Japanese market. So after ICMJ, I applied for a Japanese government scholarship to study my PhD in Meat Science at a Japanese university and luckily was successful. After studying my doctorate (Masters and PhD) in Meat Science at Tsukuba University, I gained employment with MLA Japan office as a Marketing Coordinator in 2008. I love this position – it is exactly what I had worked towards since ICMJ, in terms of assisting Australian beef and lamb exporters and working to expand the beef market in Japan and strengthen the ties between our two countries. With my science background, my position at MLA has developed to Innovation and Technology Manager.

What made you want to start ICMJ in Japan?

When I started studying at university in Japan, I was surprised that they didn’t take the students on any field excursions. The university and even the research institute where I was studying didn’t have any relationships with the abattoirs, so the students had never been in an abattoir before. On top of that, I was surprised when my fellow students upon graduating, gained employment with computer companies instead of in their field of agriculture. I immediately saw the need and opportunity to develop an ICMJ in Japan, to not only develop relations between academia and the industry, but also to encourage these agricultural students to pursue jobs in their chosen field. I wanted them to see how exciting the meat industry really is, just as I had seen when I participated in ICMJ.

What does the Japan ICMJ do (contests, how you select your national team) and how has it evolved?

Japan ICMJ started in 2009, so this year was the sixth that it has been running. We first developed Japan’s interest in ICMJ by taking students to the Australian competition in 2006-2008. We took professors and the director of the Japanese Meat Grading Association (JMGA) with the teams to the Australian ICMJ, so they could see for themselves how valuable and exciting ICMJ is. After this exposure and generating enthusiasm among the professors and JMGA, we developed the first Japanese ICMJ. We started with a simple competition of four beef carcase classes and two pork carcase classes. Only this year did we try to introduce some new classes, including retail cuts and primals. Each year the competition has been held at Tokyo Meat Market, however in the future there is interest in holding the competition at other abattoirs around the country, for example in Hokkaido. In terms of selecting the top five individuals to represent Japan at the Australian ICMJ competition, they are selected based on their meat judging scores. In the future, there is interest in developing the selection criteria to include an oral presentation or an extra training program, same as Australia.

How is the Japan ICMJ team supported by industry?

The Japan ICMJ team was supported by MLA for the first seven years, and after that the team has been supported by Japanese industry and government organisations.

What benefits do you see in the Japanese team coming to an Australian contest?

There are huge benefits, including experiencing and gaining knowledge of Australian agriculture and the Australian meat industry, seeing the enthusiasm and confidence of the Australian students, the opportunity to make friends with the Australian and international students. Above all, the Japanese students return to Japan with a sense of wonderment of the meat industry on a global scale. Japanese students often only get this domestically, within Japan. However by participating in ICMJ in Australia, it opens up a whole new world to them and they begin to see the opportunities with exporting Japanese beef and developing Japanese agriculture on a more global scale.

What advice could you give current ICMJ members?

The ICMJ competition is a unique opportunity to learn about the meat industry and test your skills at meat judging and yield/quality evaluation. Study hard and listen closely in all the lectures, and try to get as much training in as possible before the competition. ICMJ is also a fantastic time for networking, not only with the speakers at the ICMJ workshop who are industry leaders, but also importantly with your fellow competitors. ICMJ has a very strong network and you would be surprised how it can open doors for you in the future.