WHAT if you train someone and they leave?

It’s a question many station managers and owners have undoubtedly grappled with over the years.

But the edifying flip side, as captured by a quote attributed to American engineer, statistician, professor and author W.Edwards Deming, is “what if you don’t train them and they stay?”

Being able to attract, retain and train staff effectively are issues essential to the success of every northern cattle business from the smallest family enterprise to the biggest corporate.

A panel with plenty of first-hand industry experience offered many practical insights and observations on best approaches at the Northern Territory Cattlemen’s Association conference in Alice Springs last Friday.

Among the points they raised and messages they shared were:

Attracting staff is not so much the issue, it is retaining staff

“We seem to get plenty of entry level staff, and plenty of people applying, it is the retention we are struggling with,” was one comment from Nick Krebs that seemed to capture prevailing sentiment on the panel and in the room of over 500 people, including many northern producers.

“I believe we need to know the end goal, we need to know the purpose of why we have got them and where they fit into the team and then once we know that we can portray it in the recruitment process so we’re really finding the right person to take the job and to guide them through what we expect of them and want them to grow into.”

Make sure staff understand the value of what they do

CDU’s Fiona Plunkett agreed that the issue “is not getting staff so much as retaining staff” and suggested managers need to work to ensure staff understand the importance and value of each job they do.

“Talking to a lot of stations it is easy to get new staff on board but keeping them (is the issue).

“I think a big part for first years, as we would call them, is that they need to have a purpose to their job, and there needs to be a real drive for them to understand and value what they do.

“Running the race and vaccinating, they get told to do it, but there is a real value to that, if you didn’t have that person doing that you can’t essentially operate.

“So every person’s role on the station is very important and the more that we can instil in these young people that their position is exceptionally valuable and they’re part of a team, I think the better off we will be retaining them.”

On-farm infrastructure can be a further barrier to retention

Nick Krebs said a lack of suitable accommodation for couples sometimes made it tricky to fill senior positions such as head stockman roles.

“Where people are moving out of a station hand position into a leadership role, not having enough suitable couple’s accommodation (can be an issue).

“This year we have had more couples apply for a position than I can remember, and with only limited accommodation for couples we’re kind of limited to how many people we can take.

“It was a bit sad turning them away because to get comfortable on a place, and you want them to stay there for a few years, you need to give them the option of being able to stay there with a partner.”

“We are not historically known for our soft skills”

Changing dynamics with newer generations was placing greater emphasis on the importance of ‘soft skills’ and showing show appreciation and encouragement to staff, Nick said.

“We are not historically known for our soft skills,” he said.

“Historically it is a tough job and you do it, you don’t whinge about it, but I think we’re definitely looking through different generations coming up and the upbringings they’ve had and we definitely need to reassure them and work on the softer skills.

“Historically it is a tough job and you do it, you don’t whinge about it, but I think we’re definitely looking through different generations coming up and the upbringings they’ve had and we definitely need to reassure them and work on the softer skills.

That extended to providing specific training in communication and leadership, Fiona Plunkett said.

“I think in recruitment we look at the hard skills, can they ride a horse, a motorbike, are they able to handle cattle in yards. That is all well and good, and that will get them through and help us with OH&S, but when it comes to leadership and them stepping into a leadership role in two to three years’ time, we’re not developing their communication skills as much as we need to.”

Hugh Dawson said participating in MLA’s Livestock Leaders workshop initiative in the past year had been a fantastic development experience.

He has used the skills he is developing to also benefit the industry, having spoken to now over 600 students from year one to six about the northern beef industry, and explaining the opportunities that exist in the industry.

Don’t just ‘preach to the converted’ in seeking new staff

Hugh has been at Beetaloo for six years but said that seven years ago he had “no idea of the Northern Territory or the northern beef industry”.

“My take is maybe we are a bit guilty of preaching to the converted where we have been looking in the same places for recruitment opportunities.

“I would really like to see us look at metropolitan areas, go into primary schools, really share our story, what we do and the opportunities for young people in that area.

“Seven years ago I had no idea of the northern Territory, the northern beef industry, now I can see there is a definitely an opportunity to develop my own career there.

“I would like to see us more active in that space and definitely at primary school level and even secondary school level, there’s a real employment opportunity there.”

When it comes to the issue of recruitment and staff retention, the subject of money is never far away, and it was raised several times during the NTCA panel session.

Nick Krebs said the industry needed to do a better job of communicating the earning opportunities and additional benefits such as supplied board and keep to demonstrate the genuinely attractive opportunities that exist to build a long term career in the northern cattle industry.

“Money is a dirty word and no one wants to talk about who is earning what, but these young people go up, they don’t actually see the earning capacity in these positions.

“We’re getting remuneration in the industry which is equal to a lot of industries especially if you take into account the benefits of supplied accommodation.

“For plenty of years we were the poor cousins of the bush but I think we have to overcome that stereotype by talking and having discussions so young people can realise is a lifelong career with remuneration that is equivalent to the metropolitan areas.”

Advertise what the top jobs are paying

While some would be reluctant to publicly specify exact remuneration for every role, Nick suggested it be kept more general through the industry advertising wage ranges being paid across different employment brackets from first year and second year right through to senior management and CEO positions.

“Include senior positions because that is where you want people to aim.

“We all use the analogy of doing an apprenticeship, but the thing about a boilermaker, he has done an apprenticeship and gets poorly paid for four years, but he knows what a boiler maker in the mine is making.

“So we need to make sure they know what the top jobs are paying so they’re more encouraged or increasing the amount of people coming on an entry level than might filter through to those top jobs, but if there is no end goal then they have nothing to aim for.”

What if I train someone and they leave? OH&S means you must

How difficult can it be to motivate yourself to train someone when in the back of your mind you know their heading off next year, Matt Brann asked the panel.

Nick Krebs responded by saying that while it might be hard on a personal level training someone who was not fully invested in the industry, Occupational Health and Safety regulations meant it was mandatory that everyone be trained to ensure they are capable of doing whichever job they were asked to do on a particular day.

Employers had no choice but to invest all the time required to ensure first years that may soon leave are able to perform their tasks safely.

“The repercussions if you do send somebody out to do a job unknown to what they’re doing it is a dangerous line to walk, we do have to be prepared to invest time in and money into staff to make sure they are trained to do jobs they’re expected to do.”

Regardless of the field, whether it was agriculture or McDonald’s, there has to be training, Tammy Kruckow said.

“You have to train them and lead them through that role, that is your job, that is what leaders of the industry, no matter whether it is ours or another, have to do for the people coming through.”

Asked if employment opportunities for women are exactly the same as for the men, there was a strong sense among panellists that was the case now.

“I think there is definitely equity in our field now,” Tammy Kruckow said.

“If you look seven or eight years ago when I first came up here, there was a majority of males in the stock camps. 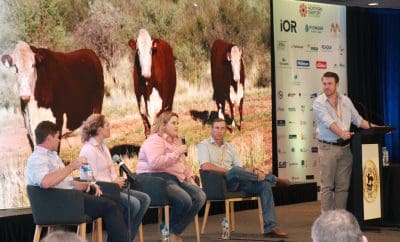 “You role reverse that now and it is a majority of females in the camp.

“But if you look at your senior positions, your manager’s positions and those sort of things, you have got to work up to those positions.

“So 10 years ago those males that were in those leading hand positions, you’re going to see them move up to management.

“You have a role reversal now, you have more females, and we’re starting to see more females come into management roles because seven or eight years ago they were in camps, starting to run camps and moving up.

“I don’t think we can just change it overnight and say we need more females in these roles.

“I think they are earned positions and people in those positions have got there because they earned them and have done what is required to get there.

Fiona Plunkett said that the staff of organisations like the Northern Territory Cattlemen’s Association and Charles Darwin University showed there were many females leadiers coming through across the industry.

Hugh Dawson also noted that on the professional and personal development courses he has undertaken in the industry, the majority of participants are women, who were looking to develop their skills to move into senior management positions.

A powerful “ripple effect” is now coming through

The benefits of professional industry training systems over the past decade were now starting to clearly come through, the panellists noted.

“We sat in on the Future NTCA Networking event and there were 50 amazing guys and girls in there, there is so much power, that they’ve got the ripple effect to make the change that needs to happen,” Fiona said.

Interested in placing a recruitment ad? A listing costs just $195+GST. Each listing appear for four weeks, or until the position is filled. Click here for a lodgement form.

Do Beef Central’s recruitment ads work? Here’s what previous advertisers had to say.