Questions being raised about MLA MD’s commercial board appointment

STAKEHOLDERS in the lotfeeding and processing sectors have expressed concern about the ‘appropriateness’ of Meat & Livestock Australia managing director, Jason Strong’s appointment to the board of mobile beef processing business, Provenir.

Beef Central first made mention of the Provenir board appointment in this People on the Move article on Monday.

Multiple processors and lotfeeders have raised concerns about the move with Beef Central. Those concerns appear to fall into two main categories: 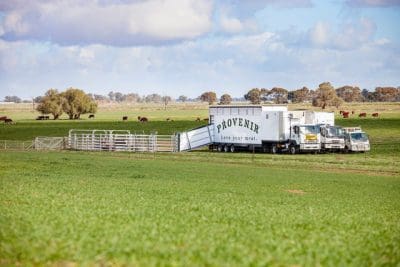 Provenir was founded on a mobile slaughtering facility concept, designed to reduce pre-slaughter stress by processing cattle on-farm. Cattle are taken to dressed carcase stage, before being transported, chilled, to conventional boning and packaging facilities.

The company has since diversified, now also operating a home-delivery retail beef business serving customers in Melbourne and Sydney, and recently launching into the production of ready-to-heat meals, called Chef Series, produced out of a facility at Avalon. The value-added products are available online or via selected retailers.

Provenir’s website appears to take a swipe at both the lotfeeding sector and mainstream beef processing, including claims that conventional transport before slaughter is ‘bad for animal welfare’ and distinctions between ‘stressful’ lotfeeding and its own ‘ethical’ collaborators’ grassfed programs. Click here to access the Provenir website, where readers can make up their own mind.

One processing industry comment said Provenir’s mobile processing operations accounted for only a ‘miniscule’ portion of Australian beef production, but said that was not the point.

“Even if there were ten such mobile abattoirs running around the country, killing 50 weeks a year, their annual output would not add up to a single day of operations of a large processor like JBS,” he said. “Every commercial operator in the red meat supply chain has the right to differentiate their product with a point of difference, but Provenir clearly talks negatively about the feedlot industry and processing industry,” a lotfeeding contact said.

“That, and Mr Strong’s decision to join the board, has raised some eyebrows in the lotfeeding sector,” he said.

“The collateral on Provenir’s website clearly shows the company is prepared to disparage the broader beef industry, to its own commercial advantage.”

Several contacts said they preferred to remain anonymous in their comments, for fear of ‘retribution’ in future dealings with MLA.

“From a contractual point of view, we would question how the industry service delivery company would allow its staff to join a board in this way. It is certainly surprising – regardless of whether or not this is a paid directorship,” the contact said.

“MLA needs to explain how and why this was allowed to happen.”

He confirmed that MLA has comprehensive processes in place to manage any potential conflict of interest that applies to all directors and officers.  “The only reason there is any awareness of this position is that we are following appropriate notification procedures.”

He rejected any suggestion that his appointment to the Provenir board meant he could next ‘pop-up on the boards of JBS or Teys Australia’ while still in his MLA MD role.

“It’s important to keep this in context. This is a small, start-up company that is doing some interesting and innovative things,” he said.

“If I can help Provenir become better connected with the broader industry, and help identify the opportunity to work across the supply chain, and help solve some of the challenges that exist, that can only be a good thing.”

“It’s good there is an interest in us all being better and promoting our industry and product on positive credentials.  I have been very vocal previously and remain committed to promoting all components of the industry on merit and not be denigrating others”

“If there is constructive feedback that anyone wants to provide on Provenir, I am more than happy for them to contact me directly.”

“It will occupy a very specific and limited amount of my time, and in no way will influence or impact my work with MLA,” Mr Strong said.

His decision to join the Provenir board is not without precedent for MLA senior management, including managing directors, in holding outside commercial company board positions.

As identified in past MLA annual reports, former MD Richard Norton sat on the board of Chinese owned agribusiness investor, RIFA Salutory, during its period of major expansion of grazing landholdings in Australia.

Mr Strong said he had been contacted this week by ‘a couple of industry stakeholders’, who had obviously been contacted by others over his acceptance of the board seat.

“My take on that was that they had a concern over my involvement with what was perceived as a ‘processor,’ on the grassfed side,” he said.

Mr Strong said his engagement with Provenir was not a ‘material activity,’ but acknowledged that the board role was a paid position – albeit modest.

“It involves only a small amount of my time,” he said. “The only reason there is any awareness of it is that we are following appropriate notification procedures.”

He said his contractual responsibilities at MLA were very clear, in terms of priorities and focus, and what he, as MD, did with his time.  “My number one employment focus and responsibility is to MLA.  This appointment has no bearing on that.”

He said the MLA board was meeting this week, and he had no doubt that as a result of recent reaction, the topic would again be discussed.

“I see a lot of positives in joining the Provenir board, including additional connections and understanding of parts of the supply chain, and exposure to new technologies,” he said.

“There’s also the potential connection from the producer through to the customer, and some of their recent work in value-adding.”

Mr Strong said his track record during his career clearly indicated his (personal) support and engagement with all parts of the red meat and livestock supply chain, without fear or favour – lotfeeders and processors included.

He asked why, if people had ‘concerns’ about the activities and actions of the Provenir business itself, they had not been raised earlier.

“For example there have been questions about Provenir’s compliance with food safety standards, given the conditions a mobile abattoir has to operate under. I’m not aware of any specific issues, so far as that is concerned. But if that is a concern today, it should have been last week as well.”

“And if it is in fact the case, then isn’t there an opportunity for me, as a director, to help get in front of that?” he asked.

Mr Strong said he in fact saw huge opportunities for feedlots with this type of mobile processing operation.

“It’s interesting – we (MLA) at times gets criticised for not having sufficient experience or understanding of specific parts of the supply chain – but when we attempt to get involved, as I currently am by joining the board, criticism arises, as well,” he said.