CONCERNS about rapidly declining cattle prices and the impact of US drought on international beef supply and demand were prominent topics from livestock producers attending Meat & Livestock Australia’s end of year Updates event in Toowoomba today.

More than 600 stakeholders from across Queensland and NSW rolled up to hear presentations on progress in research and development projects and international and domestic markets. 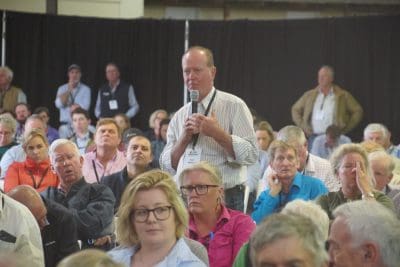 “It’s plummeting,” he said. “Give or take, you can knock a dollar a kilo off the value of all cattle, liveweight. Apparently China is reluctant to do any business with us, and Korea and Japan have pulled right back, while in the US there has been a massive cutback in imported trimmings due to the high US cow kill caused by drought. Can somenone tell me whether things will be right after Christmas? Is there a positive future, or do we have problems internationally?”

MLA managing director Jason Strong started his response by saying one of the challenges the industry had was in recognising and being comfortable with its success.

“The industry is in a materially different position from where it sat five or six years ago, let alone 20 or 30 years ago,” he said.

“Yes, cattle and meat prices have come off their highs, but these are highs like we have never seen before, and better than we could have ever imagined,” Mr Strong said.

“They are moving around, but the weighted average annual 90CL price into the US this year is US$2.84/lb. That’s higher than we have ever seen, and higher than last year, which was in turn a record. Convert this year’s figure back to A$/kg, and the 90CL ground beef price has come back to A$9.70/kg.

“That is for 90CL trim – the most commoditised product that Australia sells around the world. Yes, prices have come back, and yes, there is volatility evident in prices, but our industry is in incredibly good shape. We have progressed to a point where the supply chain is capturing value that can benefit everybody.”

How the industry managed that volatility was going to be very import going forward, Mr Strong said.

“That’s what we all need to try to work out. But if we think about the big macro drivers – the progression of the industry in the last 20 years from being commodity-driven to being a producer of high-quality, traceable, verified, credentialed, consistent product with preferential access into many markets, we’ve come a long way.

“Twenty years ago we had one FTA with New Zealand, and we had no quality assurance or traceability. Today we have 16 FTAs, and better systems than any exporter in the world. The fact we can talk about these things, and understand the global market, puts us in much better shape,” he said.

“Prices will move around – no question – but the macro-drivers are so much better than what we’ve ever seen before, and our opportunity is how we capture those in the best possible way – not panicking, and driving unnecessary price or market movements. A big part of what we need to do as an industry is find ways to better work together to get on top of these fluctuations.”

Kyogle (NSW) beef producer Rob Sinnamon asked whether the industry had an issue with beef pricing itself out of reach of the average housewife’s weekly budget.

“Sure, it’s great from a producer perspective, but are we running the risk of becoming a luxury protein, instead of a staple part of the diet?” he asked.

MLA’s general manager for marketing and insights, Nathan Low, said there were parts of the beef ‘portfolio’ that definitely were becoming a luxury protein.

“But what our data and insights analysis shows is that people are still prepared to pay for more expensive beef. It’s not so much the absolute price, it’s the relativity to other proteins,” he said.

“My guess is that as an industry, we need to think about how big we want to be. Are we attached to what our market share is, and wanting to sell a cheaper product to drive beef’s market share (in Australia), when it could perhaps command higher prices in international markets?”

“That would be manipulating the market, if our main target was domestic market share. But when I look at it, it’s moving relatively slowly. Even though beef prices have increased substantially, our volume share movement has shown a steady, slow, small decline over the past 20 years.

“But beef still commands 30pc volume share of the market – it is still substantial – and the number two volume protein in the domestic market (after chicken). And I don’t think we want to compete with chicken head-to-head. Being able to hold our volume where it is, despite rising prices, is a sign that the industry is super-healthy.”

At the same time beef’s value share (price x volume) is growing, and is higher than it has ever been.

Lamb, on the other hand, had become ‘slightly niche’, because it was consumed on much fewer occasions, Mr Low said.

“But lamb still has 74pc household penetration in Australia every year. We’d like it to be higher, and eaten more frequently, and we’re working hard to promote that. But both beef and lamb are still very much mainstream proteins, and I certainly don’t see an existential threat in beef becoming a niche product.”

Probably, the inbuilt protection for beef (versus lamb), was the diversity of cuts, and the amount of dishes that feature items like mince, Mr Low said.

“There will be consumers out there who cannot afford premium steaks any more. But they will downgrade to a cheaper steak, or go to cubed beef and cook different cuisine types to manage their household budget. They might substitute an extra mince dish each week, but they will still be consuming beef.”

“We should be proud of our industry than can command super-high prices globally, which inevitably puts pressure on prices domestically.

Not a new challenge

Jason Strong made the point that MLA commonly fielded comments that retail beef and lamb prices were ‘too high’ for the consumer.

“But the most common source of those comments are beef producers themselves, which is a bit odd,” he said. “Tha plan is to generate more revenue from our product. But to give stakeholders some comfort, this is not a new problem. Outside of the COVID period, longtitudinal consumer studies have shown for years that price has been the dominant driver for people to consider eating less product.

“Go back ten or twenty years, and it was the same. Since then, we’re producing a more consistent product, it has more credentials, we tell our story better, we’re giving consumers more reasons to eat beef, and we are leaning into their desires over good nutrition.

“All of the things we are doing to support beef sales and beef consumption lean into this: yes, it is an expensive product and people have to pay more for it, but there are reasons for that. Our challenge is how we continue to give the consumer comfort that buying an expensive item is worth it, and all these fantastic credentials support that.

A producer identifying himself as John, from Texas on the NSW/QLD border, wanted to know more about the impact and effect of the US drought on Australia. “What dynamic effect is that going to have on our industry?” he asked.

“We’ve been monitoring this for more than 12 months,” Jason Strong said.

“US drought represents huge opportunity for Australia, in terms of beef demand next year.”

“The reduction in the US cow herd is going to reduce US beef production. If they reduce their beef production year by 10pc, it massively erodes the US’s ability to export, because most US beef is consumed within the US itself.”

Mr Strong said the interesting point was that the drought impact was not playing out in the same way that it had in the past.

“The drivers now are different from what we’ve seen in earlier droughts. The dynamics have changed. But that said, the US competes with Australian beef in many international markets, and they are a large market for our beef. Any reduction in their production next year must be beneficial to Australia, and certainly falls into the broader demand and opportunity story that will play out over the next 12 months.”