Australian Competition and Consumer Commission deputy chair Mick Keogh has greeted recent moves by a handful of red meat processors to publish direct price grids on the internet as a “good start” towards improving transparency for producers – but says there is still more work to be done. 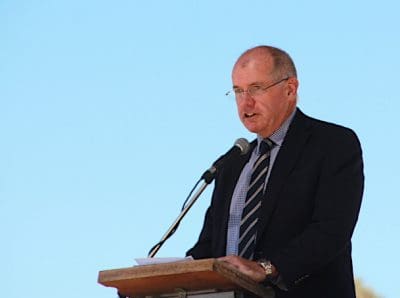 ACCC deputy commissioner Mick Keogh, who grew up on a family farm just down the road at Holbrook, officially opened the 2018 Henty Machinery Field Days at Henty on Tuesday.

In May the ACCC published an update report criticising the lack of industry progress towards voluntarily adopting the ACCC’s 15 recommendations, including grid disclosure.

Mr Keogh told Beef Central at this week’s Henty Machinery Field Days, which he formally opened on Tuesday, that the decision by TFI, Bindaree and Teys Australia to publish price grids was a good start.

“That wasn’t the whole picture of what we were after, we certainly think there needs to be a fair bit of work done in the industry on some of the issues around saleyards and some of the reporting of over the hooks sales,” he said.

“But that is a great start.”

While there had been many concerns voiced by the processing industry in opposition to the grid disclosure recommendation, Mr Keogh said the experience so far suggested there had not been the negative impacts many feared.

“A lot of people said there will be all sorts of trouble and all sorts of difficulties, but my understanding is that TFI have not run into any issues and Bindaree have been doing it for quite a while and Teys have now been trialling it.

“I think the predictions of major issues as a result haven’t arisen, and I think that increased transparency gives cattle producers a better option in terms of understanding what is happening in the market.

“It is only a small thing, it is not changing the world, and I just think that sentiment of being fairly transparent and having that information more readily available is quite important for the future of our industry.”

Mr Keogh said a critical issue the ACCC was hoping to see more progress on surrounded the question whether or not a buyer register should be created to manage the issue of commission buying, which he said livestock agents were onside with.

Tied in with this was the need for standard national licensing so the industry itself could then take action by way of delicensing participants when behaviour fell outside scope of what was acceptable.

“They (livestock agents) are as frustrated as we are at the moment that that can’t happen because, apart from a couple of states, there is no licensing (of agents).

“We’re talking to the Council of Ag Ministers in October and have a paper presented to them, so we’re starting to advance these issues, and particularly the national licensing of agents.

“That is very much is a state licensing issue and it has been tried a couple of times and they haven’t made any progress, so this time hopefully we might get somewhere”.