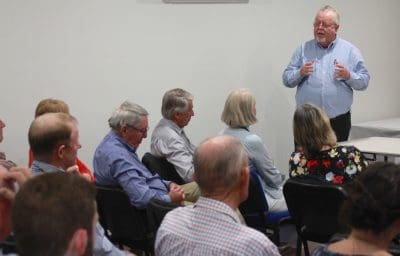 Many public hearings have been held around Australia in recent years with the aim of getting to the bottom of market competition issues between producers and processors.

However, very few have involved producers and processors talking to each other in the same room.

In a bid to help bridge that gap, Queensland LNP Senator Barry O’Sullivan has led representatives of the meat processing industry, along with Cattle Council of Australia and Meat & Livestock Australia, on a series of regional meetings with cattle producers throughout Queensland this week.

Senator O’Sullivan is the chair of the Senate Rural and Regional Affairs and Transport (RRAT) Legislation Committee, and deputy chair of the RRAT References Committee, which has been conducting an inquiry into competition in red meat processing sector since last year.

This inquiry, along with a previous Senate RRAT inquiry into grassfed cattle industry structures, and a cattle market supply chain study by the ACCC, has resulted in many producers raising concerns about perceived inequities in how prices for their cattle are determined at saleyards and in meatworks.

At the same time, in submissions and appearances at public hearings, processors have refuted suggestions that they enjoy, and exercise, unfair market power at the expense of producers.

Earlier this year, Senator O’Sullivan, who has been involved in both Senate inquiries for the past three years, issued a warning that greater cooperation was needed from all industry sectors.

In his view, industry-led solutions were more desirable than Government imposed solutions, but could only occur with full industry commitment to identifying and addressing problem areas. 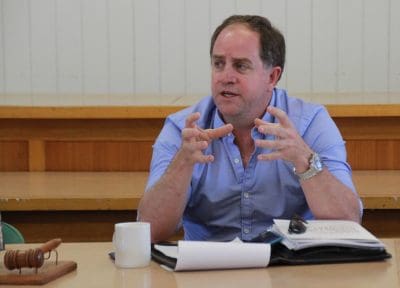 The meetings are aimed at bringing representatives of the whole supply chain together to hear from producers, and to inform the final stages of the current Senate inquiry into competition issues in the red meat supply chain.

Mr Hart and Mr Noble told the meetings yesterday they were there to listen and the processing sector was focused on working together with producers to develop solutions.

“Under my watch at AMIC I am very keen to be more inclusive, and very keen to focus on the whole supply chain, and focus on developing that one voice around industry,” Mr Hart said.

At Longreach yesterday producers spoke with hope that a recent break in the season may see the town’s cattle saleyard reactivate soon for the first time in more than three years.

Producers had been forced to sell on a vastly oversupplied market at historically low prices. 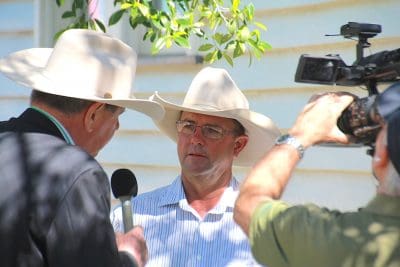 “To my knowledge, the processors did not work with their supplier partners in any way to support them in this disastrous period,” he told the forum.

“All they did was offer meagre prices to already struggling producers.”

Included in a range of issues he raised were concerns that producers can sell cattle that meet MSA grading criteria, only to fall out of MSA pricing at the meatworks because they fail to meet that company’s own specifications for MSA.

“This is the single biggest issue with producers. The carcases that meet MSA, but fail company specs, what market do they end up supplying?”

He told the forum mandatory price reporting and third-party meat graders were needed if there is to be any ‘trust’ between producers and processors. He said comparisons between carcase trim standards used in Australia versus the US showed that producers here were disadvantaged.

Why different halves of the same carcases can return significantly different pricing results after grading in meatworks was another issue that attracted at-times heated debate at last night’s Cloncurry meeting.

Members of the travelling delegation suggested that the nearing introduction of objective carcase measurement technologies, such as DEXA carcase meat yield scanning devices now in use in some southern lamb processing plants, would ultimately remove concerns about the independence of graders, and would pave the way for industry moves to value-based marketing.

Senator O’Sullivan also alluded to what he sees as a need for a national code of conduct governing the performance of commission buyers and buyer’s agents in saleyards to remove opportunities that exist for individuals to affect market outcomes.

He said saleyards remained a critical selling option for many producers and it was vital they remained, but the “whole yard needs to be tidied up”.

The comments caused a number of agents in the room to defend the role of agents, suggesting that the main focus of the inquiry should be on commission buyers.

Senator O’Sullivan said a national code of conduct for saleyards should be developed by industry, not Government.

“I don’t think that any one of the major processors sat down and had a board meeting and created a policy position that this is what we’re going to do in the saleyards, and get that down to the buyers and make sure they get with their mate and take turns.

‘I think this is a shared hangover problem’

“I think this is a shared hangover problem.

“I think this is men and women who are trying to do the best job for their boss, they get into these arrangements themselves, but in the absence of any sort of code of behaviour, tomorrow will look just like yesterday.

“And all I can tell you is that the people involved in the senate inquiry have decided there is a problem.

“The question is what do we do about it?

“If industry doesn’t want to get in and sit down together and knock it out and come up with something that works, then I think, and I am not the sole decision maker, but I think that Government will buy into this space.”

Senator O’Sullivan said the Senate committee’s attentions will also focus on the question of whether a nationally consistent rule in favour of either pre-sale weighing or post-sale weighing is required.