Platform aims to give Chinese customers ‘ownership’ of Aussie beef, on the hoof

A NEW digital technology platform launched in Sydney this week aims to give Chinese restaurants and consumers the ability to ‘own and trace’ Australian cattle, sell or share with family and friends, and connect with top chefs and nutritionists. 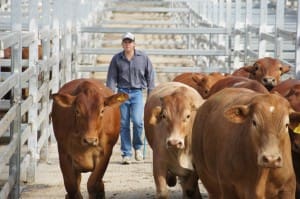 At its launch today, Borderless Cattle announced its intention to give Australian livestock producers direct access to Chinese consumers and end-users, as it ‘builds a marketplace to drive a new beef sharing economy’ within China.

“By becoming a member in Borderless Cattle, Chinese consumers and restaurants will be able to own livestock on an Australian cattle station, monitor their health status and growth, and trace their movement until the meat is delivered in China,” the project founders said in a statement. Connectivity would be established using a suite of technologies including drones, IoT (internet of things), and blockchain.

“Additionally, through a smart TV platform called Foodsmart.life, members can access recipes, conduct interactive cooking workshops with celebrity chefs from around the world and connect with nutritionists and health advisors, all from the comfort of their own home. All sessions will be supported by a multi-lingual food concierge,” a Borderless spokesman said.

Each of the livestock owned by a program member would be represented by several hundred boxes of ‘virtual beef’ the company said.

A member could use the Foodsmart.life platform as a business tool to share or sell portions on to other consumers, six to nine months prior to slaughter the company said.

Founder and executive chairman of parent company Borderless, Dr Wei Siang Yu, said the business was about “creating an engaging platform for restaurants and consumers to grow and develop a beef sharing marketplace. Members can invite friends over to their homes to take part in workshops and even resell part of their beef, driving social networks and a small business economy, and creating an unprecedented opportunity for Australian cattle producers.

“Certain lifestyle stages such as pre-pregnancy, pregnancy, parenthood, and chronic disease are driving a new protein boom in China, along with a desire for healthier and better-quality food beyond the typical supermarket experience,” he said.

The program plans to begin trading in July, with deliveries available to more than 300 cities across China.

Initially, Borderless Cattle will accept orders from restaurants, which will be required to order a minimum of five head of cattle. Borderless Cattle anticipates having 500 restaurants or corporate members in its first year, accounting for 2500 head of Australian cattle. The program will be extended to individual members at a later date.

Ben van Delden, Partner and Head of Agtech at KPMG and Food Agility CRC director, said new digitised supply chains were emerging that favoured premium producers who can authenticate provenance, stewardship and quality from the farm right through to the consumer’s table.

“Bringing the consumer transaction forward to the first phase of the supply chain, and using agtech to validate trust, elevates the relationship that end-consumers have with their protein source. It also addresses a major liquidity challenge for Australian beef producers, as the consumer funds the grower from the beginning of the beef production cycle.”

No mention was made about supply chain arrangements to get the animals purchased through Borderless Cattle to their owners in China.