Activists tend to decry economics as a weak defence of poor behaviour, but this is a naive approach writes the Australian Farm Institute’s Katie McRobert in this cross-posting from the AFI website

Let’s be clear: mistreatment of animals is incompatible with the ethics and farming practices of the overwhelming majority of Australian farmers. Any breach of our world-leading animal welfare standards should be investigated and rectified as soon as it is known.

But let’s also be clear about the reality of the social contract. Our society is omnivorous, not vegan, and livestock farming is likely to continue indefinitely in Australia. Continuous improvement of farming practices to enhance welfare, ecological management and productivity is in everyone’s interest, and fostering a combative approach helps no one. More importantly, substituting emotion for fact is destructive to the process of creating social good.

On March 29, Agriculture and Water Resources Minister David Littleproud received an incident report from his Department about an Australian live sheep export voyage to the Middle East in August 2017 which involved high heat mortalities. The following week he saw footage supplied by Animals Australia of voyages from 2016 and 2017 depicting “disgraceful” conditions which “shocked, angered and saddened” him.

Decisions on what happens next cannot be made in a vacuum.

These welfare breaches provoked the usual social media flurry, including an expectedly passionate response to the Australian Farm Institute’s request that the Twittersphere consider potential impacts of a live trade ban within the national economic context.

Activists tend to decry economics as a weak defence of poor behaviour, but this is incredibly naïve. Naturally, economic rationalism should not be used to defend practices we as a society agree are unacceptable. We don’t contemplate sending our kids to work in a sweatshop in their pre-school years to cover the costs of kindergarten, even though it may be economically beneficial to do so.

But here’s the rub: every social benefit we enjoy in our first-world community is directly related to our economic prosperity. Our standards of education, health care and indeed animal welfare are all correlated to our comparative wealth as a country.

Like it or not, economic context dictates social improvement – and wilfully ignoring this context obstructs change.

Effective decision-making requires a complex understanding of the existing issues and consequences of potential actions. Keyboard warriors shouting for attention can indeed change public opinion – but what needs to change next is the regulatory environment, not public perception. As the National Farmers’ Federation CEO Tony Mahar said in the subsequent Twitter exchange:

“More information means better understanding of the challenges and must result in more ways to address the failures.”

The footage aired by Four Corners in mid-2011 prompted an instantaneous reaction from then-Agriculture Minister Joe Ludwig, and the subsequent live export ban caused incredible economic damage. This week Greens Senator Lee Rhiannon renewed her push to replace live exports with domestic processing for the boxed (chilled) meat trade. However, a report released by the AFI in 2017 concluded that this option was not feasible. Comprehensive economic modelling by ABARES and the Centre for International Economics demonstrated that a cessation of livestock exports would impose a gross annual cost of about $300 million on livestock farmers Australia-wide and would only generate around $100m in extra revenue for the meat processing sector. Live export is a significant economic contributor to Australian agriculture worth approximately $1.8b annually in farmgate returns, and agriculture in turn was the largest contributor to national GDP growth in 2016-17, contributing 0.5 percentage points of national total 1.9 per cent growth.

In contrast: concerned that a mortality report from the independent regulator did not accurately reflect the conditions seen in the Animals Australia footage, Minister Littleproud has announced a review into the investigative capability, powers and culture of the regulator (his own Department). In a show of bipartisanship, the federal Labor party stated that the Opposition wants to “end the cruelty without hurting our farmers” and reiterated calls for an Inspector General for Animal Welfare and an Independent Office for Animal Welfare. The RSPCA has also long advocated for the establishment of a national animal welfare advisory body to coordinate national standard-setting. The Australian Livestock Exporters’ Council CEO Simon Westaway said the on-board conditions filmed were plainly unacceptable and showed more work needs to be done for the trade “to remain ethically and economically viable” by building on existing welfare practices.

These responses are thoughtful and proportional. Banning live export is not.

While the live export trade is not without its problems, Australia’s animal welfare standards for livestock set a benchmark far in advance of any other place on the planet. Along with the live export ban, reaction to the Four Corners revelations also prompted a serious review of export welfare standards, resulting in the introduction of the Exporter Supply Chain Assurance System (ESCAS). Mecardo market analysis shows the overall trend is for improved outcomes on live export journeys and that the livestock mortality rate is steadily declining. 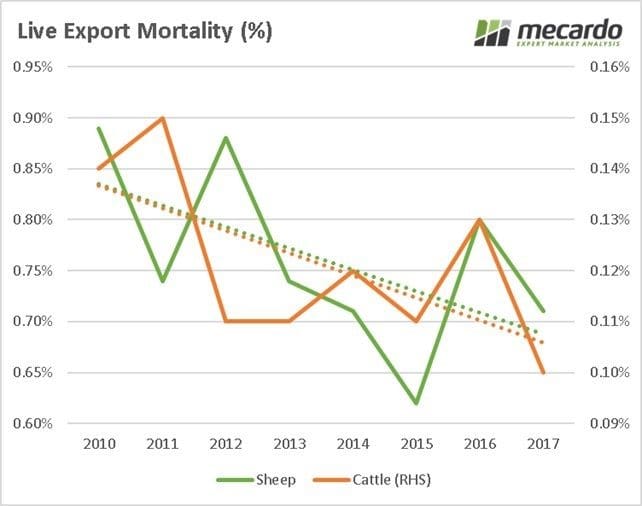 No other country holds the recipient nation of traded animals responsible for upholding the same welfare standards we insist upon. Again, this response (unlike the trade ban) was the result of careful thought and planning. The pace of change may not content all stakeholders, but removing Australia from the live trade scene also removes any incentive for the other 130 live-exporting nations to emulate or match these standards.

By deliberately provoking an extremist, knee-jerk response to an emotive issue, some activists risk creating a narrow-minded group of ‘sheeple’ who react mindlessly without thought for the consequences. As AFI’s General Manager Research Richard Heath wrote recently, reacting on assumptions rather than evidence can in fact have adverse outcomes for animal welfare overall.

As a society, we are indignant about a great many things which our neighbours find perfectly acceptable, including what we will and won’t eat. Our comparative wealth enables the luxury of choice. In order to fund social good, we must remain economically prosperous – and to remain prosperous, we must work cooperatively on solutions that benefit the whole.