Just 5.19 percent of MLA members, and a considerably smaller number of overall grassfed beef, sheepmeat and goatmeat producers, were motivated enough to engage in voting in this year’s industry AGM. 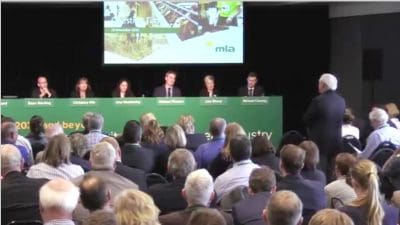 It’s taken a while for MLA to pull the figures together for us, but here’s some statistics out of this year’s November 22 gathering.

Firstly, how many potential voters are there?

It’s an interesting question. As Beef Central has highlighted in this earlier article, there is no definitive answer to the number of beef, sheepmeat and goat producers in this country.

A figure highlighted by RMAC chair Don Mackay at the Alice Springs industry forums last week was 75,000 ‘businesses’ attached to the red meat supply chain (figure includes lotfeeders, processors, wholesalers, retailers etc). Within that figure, there were about 70,500 beef and sheep producers. This figure, published in the recent RMAC State of the Industry Report, apparently includes hobby farmers and those with a ‘couple of head on acreage blocks’.

MLA said it did not have access to, and consequently was unable to provide the current number of beef, sheep and goat transaction levy payers. Legislation has been passed by the Federal Government to identify levy payers, however. The department is now working with the RDCs, including MLA, in implementing the changes to enable the establishment of levy payer registers.

It should be pointed out that not all levy payers are members of MLA, however. Levy payers physically have to register for MLA membership, and voting entitlement.

As at 22 September, there were 49,585 MLA members eligible to vote in this year’s AGM – or about 71pc of ‘producers’, using the above definition.

The number of MLA members who applied for their full voting entitlement this year (votes are calculated by reference to levies paid each year on a sliding scale) was 4943, or about 10pc of all MLA members.

But it gets worse. Of those 4943 MLA members who went to the trouble of securing their full voting entitlement, just 1464 (2.9pc of all MLA members) exercised their vote during the AGM.

Add to that an additional 1108 MLA members who voted, but did not seek their full voting entitlement (hard to believe, given that it leaves them entitled to only a single vote), and it means the total eligible MLA member participation in the AGM was 2572 producers, or 5.19pc of ‘eligible’ MLA members.

On the strength of the figures presented above, it’s reasonable to assume that around 3pc of all beef and sheepmeat ‘producers’ in Australia were motivated to take part.

The above statistics are not intended to suggest that MLA’s voter performance is any different than other RDC’s. Some say it in fact may even be better. And there’s no suggestion that MLA did not make significant attempts to engage with its stakeholders over the opportunity to vote. Each July, MLA sends every member a levies pack and in October, a formal notice of the AGM. It also places awareness ads in this publication and numerous others, issues press releases and raises the AGM at countless preceding industry events.

While this year’s voting participation was not significantly lower than earlier years, we think there may have been a couple of factors in play at the 2017 AGM which moderated voter engagement.

There were no real ‘hot topics’ being debated or voted-on this year via special resolutions. The only real voting was to approve or reject the board selection committee’s choices. Some stakeholders say the only AGM’s really worth attending are those when the board deems it necessary to hire security at the front door, which has happened at least once in the past 20 years of MLA’s existence.

We would submit that the other factor in play this year is livestock prices. High prices for cattle and sheep, regardless of the reasons for that, tend to inject a sense of complacency or contentment among producers, and the tone and direction of questions from grassroots producers at this year’s forums supported that view.

On the other hand, low price cycle years tend to flush out a greater sense of scrutiny, and potentially, voting engagement.

How relevant is the AGM process?

The topic of the relevance and need for AGMs in the modern age comes up reasonably frequently in the corporate world, and perhaps provides some cues for industry organisations like MLA.

Levy payer participation in this year’s MLA AGM was not particularly low, by private sector standards. Many ASX-listed public companies struggle to get 7-10pc of all shareholders to participate in the voting process. The big institutional investors tend to dominate voting outcomes, and smaller ‘ma and pa’ investors often feel their pro-rate vote counts for little.

The ASX Corporate Governance Council’s Principles and Recommendations describe the annual general meeting as the central forum by which companies can effectively communicate with shareholders, provide them with access to information about the company and corporate proposals, and enable their participation in decision-making.

But the CGCP also said that in reality, the AGM has become “less and less relevant for significant strategic decision making, and there is a steady decline in shareholders wanting to participate in the forum.”

The Federal Government’s Corporations and Markets Advisory Committee issued a discussion paper several years ago which said only 5pc of the top 200 Australian listed companies drew more than 500 shareholders to their AGMs – many with tens of thousands of shareholders.

“Rather than being an effective communication forum to stakeholders, AGMs are increasingly viewed as an opportunity for a few disgruntled retail shareholders to ‘vent their spleen’ at the board,” CAMAC’s paper said.

“Questions put to the board are often ill-informed and little of the shareholder debate at AGMs is on the strategic direction of the company.”

Some would argue that MLA suffers the same fate.

Institutional shareholders (and to a certain extent, listed companies themselves) argue that higher levels of continuous disclosure, combined with companies using more corporate briefings, teleconferences and webcasts have rendered the AGM largely irrelevant.

“However, listed companies need to ensure their investor communication is balanced,” CAMAC suggested.

“Retail shareholders (including smaller individuals) must have the opportunity to participate if they want and communication cannot be solely focussed on institutions. Until this can be achieved, it would be difficult to scrap the AGM completely,” it said.

The Australian Shareholders Association argues that the physical AGM process is often the only access small investors get to boards and executives, and that that engagement should be increased, not reduced.

“In other words, boards are currently held accountable and have to ‘front’ shareholders. There is an argument that the loss of a physical AGM leads to a loss of accountability,” it said.

‘Virtual’ AGMs on the horizon?

While attendance wise, MLA’s recent Alice Springs AGM was an outstanding success, given its remote location, watching the day’s events remotely via Livestream raised the question of whether face-to-face AGMs for the red meat industry might be on the way out.

Staging such an event in a logistically-challenging location like Alice Springs inevitably costs the red meat industry a colossal amount of money. And the MLA board has consistently shown a determination – symbolically or otherwise – to take its AGM into the regions, including some ‘financially-challenging’ locations like Darwin, Mt Gambier and Perth. It cost the best part of a thousand dollars for any east-coast industry stakeholder (or small independently owned and operated media company, for that matter) to get to the Perth AGM a few years ago.

Questions are now frequently asked about whether technology should play a stronger role in the conduct of industry, and corporate AGMs.

“Embracing technology is the key,” says the Corporations and Markets Advisory Committee, in its recent discussion paper. “Arguably many more shareholders would participate in AGMs if they were held over the internet, and if ‘on-line’ voting was a feature.”

The committee warns, however, that with greater use of technology, the issue becomes one of maintaining accountability of management via questions or comments. US companies are leading the push into increased use of technology at annual meetings, which is made easier due to US laws that facilitate the use of technology when engaging with shareholders.

Expanding the use of direct voting by shareholders could also help rejuvenate the AGM process, CAMAC says.

Direct voting involves shareholders casting a vote on one or more matters and forwarding that vote or votes to the company prior to a cut-off time before the AGM. This would replace the necessity to appoint a proxy, and give shareholders direct ownership of their votes.

Several ASX top 50 companies already permit direct voting as it normally only requires a simple amendment to a company’s constitution to allow it to take place.  However, companies would be more willing to use direct voting if it was explicitly permitted by the legislation or the ASX Listing Rules. MLA already has online voting in place – members can vote online up until the cut-off date for proxies. However its constitution does not currently allow for voting online after that point.

The obvious challenge to the notion of on-line voting and AGMs, is that a ‘virtual’ AGM for an organisation like MLA might in some way restrict shareholders’ right to interrogate their board, or senior management. There is an argument that the loss of a physical AGM leads to a loss of accountability.

Another factor in favour of any ‘physical over virtual’ discussion is that MLA now clearly sees November’s annual industry gathering as ‘more than just an annual general meeting’. The AGM is now a sub-set of a much bigger industry event, offering producers opportunities to network, see and try new innovations, take part in forums and farm tours and hear from some leading speakers in the red meat industry.

It partially explains how MLA was able to pull 400 stakeholders to the centre of Australia last week – a long way from the result at an AGM held in Melbourne some years ago, where there was barely 60 ‘grassroots’ producers in attendance.