Highlighting the increasing uptake of online technology in physical livestock auctions, a South Australian stud will incorporate not one, but two, online services when it conducts its annual on-property bull sale next week.

The Woonallee Simmental sale at Furner near Millicent on South Australia’s Limestone Coast next Thursday will incorporate an AuctionsPlus live bidding interface, which allows buyers not in attendance to bid in real time for bulls offered at the live auction.

The stud has also engaged newly launched business Live Bidding to live stream the sale to outside viewers via video.

Launched this week by the team behind Genomix, which held an Australian-first genetics auction at Beef 2015 last year, Live Bidding is the newest player to enter the increasingly competitive live streaming and live bidding space in Australia’s livestock industry. 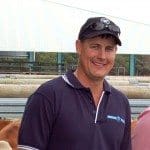 Woonallee Simmentals principal Tom Baker said the increasing range of online services designed to enhance livestock marketing were helping to break down the barriers of distance.

“Being based at the bottom of South Australia, it allows us to open our sale up to clients Australia-wide,” Mr Baker said

“A lot of people can’t get down so it is good to be able to have the technologies so people can still watch and bid on the auction as well.”

Mr Baker said the stud has long had success using online interactive bidding via the AuctionsPlus bidding interface to enable outside buyers to participate in the sale.

He said the stud is introducing the live streaming service this year to further broaden the sale’s reach and exposure.

“I think there is a pretty general consensus that people want it see what is happening in the ring and live streaming allows us to do that.

“Generally a lot of our clientele bid on the phone as well, so they can watch the auction in real time while they are bidding on the phone.

“It is breaking down the barriers and allowing us to bring something fresh and new to buyers far and wide.”