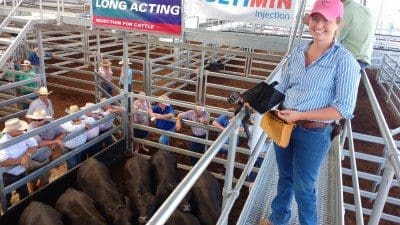 Some of Australia’s biggest cattle saleyards are stepping into the digital age with the introduction of live streaming services, allowing outside viewers to watch their sales in real time.

On February 16, beta testing will also be carried out at Australia’s biggest cattle selling centre, Roma.

The company behind the innovation, Livestock Exchange, says the aim of the testing is to develop a reliable system to allow livestock sales to be viewed in real-time via an online connection from anywhere in the world.

As the technology is tweaked and refined, online bidding at live streamed store and prime cattle sales is emerging as a not-to-distant possibility.

Livestock Exchange is a developer of dedicated technology and software for the livestock marketing industry. Its software is used at around 100 saleyards across Australia.

It is currently rolling out its updated software, AuctionIT, which will provide information to feed into the Live Stream of each sale.

Roma Saleyards manager Terry Hyland told Beef Central the technology is being introduced to make it easier for buyers to access cattle without having to travel and for producers to be able to watch sales live and to see how their cattle have sold.

He said it will take time to tweak and improve, but the technology would help to ensure saleyards remain a strong force in livestock marketing well into the future.

Mr Hutchinson said the company is rolling out the technology in a measured way in order to beta test and refine it.

From a procedural perspective, the sale will be streamed by an operator carrying a Go Pro camera linked to a tablet with a wireless dongle.

He said live streaming will give cattle producers and buyers the real-time ability to follow sales they cannot attend in person.

A new soon-to-be-launched App linked to the AuctionIT program will also allow producers to book cattle into upcoming sales, which Mr Hutchinson said will also benefit agents by helping to automatically compile pre-sale catalogues, allowing them to get on with other business.

He said the company is investigating the introduction of a platform that will allow online buyers to bid on cattle in real time at physical store or prime cattle auctions, but there were still a number of hurdles to overcome before that could happen.

“There is still a lot that needs to be discussed, such as how does an online bidder manage transport as opposed to a commission buyer onsite managing that process,” he explained.

“How do we mobilise and manage the internal machinations of a sale such as clerking.

“And there is still age old issue of connection. We are quite adamant that with connections right now there is still a delay (between real-time sale action and internet feeds). Our testing is all about understanding these issues and refining the process as we go.

“This is an area of concern with online bidding especially for a fat sale, because it is done in cents per kilogram and it is done at such a speed, not on singles.

“But we are investigating it and we do think that online bidding at these sales where buyers can bid with confidence will be a realistic function in the future.”