IN what’s being hailed as the biggest structural change to agricultural labour in Australia’s history, a long-awaited agricultural visa will be introduced in coming months to boost the workforce in the nation’s meat processing horticultural, fisheries and forestry sectors.

The new Agricultural Worker Visa announced by the Federal Government today will offer temporary workers, who will be sourced from ten Southeast Asian nations, a pathway to permanent Australian residency. 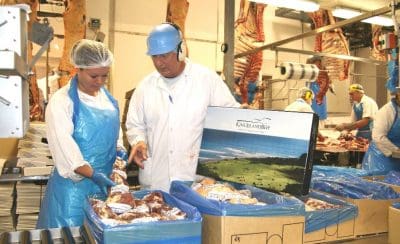 The visa will provide a long-term, reliable workforce for Australia’s critical industries while solving one of regional Australia’s greatest challenges in recent history, ag minister David Littleproud said during the launch.

The new visa will be in place no later than 30 September, with the full implementation completed within three years, the government said.

The visa will be open to applicants from a range of countries and will be available to skilled, semi-skilled and unskilled workers across meat processing, fisheries and forestry sectors, and provides a basis for the ongoing growth of the nation’s primary industries, Mr Littleproud said.

Deputy prime minister Barnaby Joyce said the agriculture visa would deliver what so many primary producers were crying out for.

“It will give regional Australia the workers they need to get produce to plates in Australia, as well as in our export markets,” Mr Joyce said.

Mr Littleproud said the agriculture workforce shortage had been a major issue during COVID.

“While our farmers and industries have gone about their work keeping Australians and the world fed and clothed, they have done so under workforce constraints,” he said.

“With the changes to the Working Holiday Maker program as a result of the UKFTA, we knew this was the time to get the agriculture visa across the line. This is a structural change to the agricultural workforce – it gives our farmers the confidence to plant a crop and know that they’ll be able to get it into the supply chain, at harvest.

Mr Littleproud said the new visa would complement the Pacific Visa programs already in place, but would also provide a pathway to permanent residency.

“We’ve listened to our communities and our industries and this is what they’ve asked for. This will also help keep our next generation in town, knowing that the future of regional Australia is bright and prosperous,” he said.

“The visa numbers will be demand-driven – there are no caps on this,” he said.

“Effectively, it will come down to the bilateral negotiations that will take place now. And we’re obviously trying to accelerate those with countries that we have long standing immigration relationships with, such as Philippines, Thailand and Vietnam. But it also means the UK, because this obviously came about as part of the negotiations on the UK free trade agreement. So, UK workers will come under this, and this is the primacy of this, but it also supplements and complements the Pacific schemes that are in place at the moment,” he said.

“So, there’s nothing stopping the 25,000 men and women through those seasonal Pacific schemes coming in. This is also going to skilled and semi-skilled workers, not just unskilled workers.”

Mr Littleproud said most of Australia’s meat processing sectors were currently running around 60 to 70 percent of capacity, because they simply did not have the people to do the jobs.

“This new visa represents a concerted effort by both industry and government, that recognises that we are an essential service. This is not about trying to substitute Australian labour with cheaper labour from overseas – it is in fact so much harder to go through this process to get workers on site, than it is to hire locals,” chief executive Patrick Hutchinson said. “But if we can’t do it the easy way, we have to do it the hard way.”

“AMIC has been working on behalf of the whole industry on this. We’ve been very clear in a number of the key structures we are looking for – as an industry that is concerned about its labour future.

While the new visa was “gratefully accepted and appreciated”, there were a few important aspects that the meat processing industry would need to continue to work on with government – “issues that are quite specific to red meat processing, as opposed to horticulture or other parts of agriculture,” Mr Hutchinson said.

“We still need to see how this is going to play out. We don’t want to see workers exiting the country within nine to twelve months of their arrival. The processing industry, with the skill levels involved, needs people who are here for four years. We are not a seasonal industry like horticulture – processing is 12 months of the year.”

“But it will certainly help, in the broader solution,” he said.