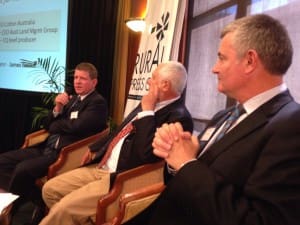 What do carcase language and beef industry sustainability have in common?

Perhaps not a lot at first glance, but without big changes to the first, it will be almost impossible to achieve the second, a Rural Press Club of Queensland forum on sustainability was told on Tuesday.

For more than 10 years Central Queensland cattle producer Ian McCamley has been campaigning for changes to carcase language in Australia to ensure that the best eating quality cattle receive the best price.

The current AusMeat language system is, he says, based on outdated 1970s thinking that robs producers of profitability and, just as importantly, the market signals they need to produce better quality beef, which would benefit the entire supply chain.

He says the advent of MSA eating quality science has shown that the existing AusMeat quality and price determinants of age, dentition, meat colour and fat are lacking in scientific justification and too open to subjective interpretation, often at the producer’s expense.

Why do we penalise producers for producing the type of cattle that will most satisfy consumers, he asks?

As previous Beef Central articles have highlighted (see below this article), Mr McCamley believes dentition should be removed from processor grids in favour of a system that allows cattle to be graded purely for eating quality under science-based MSA assessment.

It is a measure of his determination to drive change on this issue that when he was asked to address the RPCQ forum on sustainability in Brisbane on Tuesday, it wasn’t long before he turned the discussion back toward the need for changes to carcase language in Australia.

That is not to say he didn’t have a strong case that the two issues are inherently linked.

As Mr McCamley told the forum, the core component of sustainability is profitability: “It is the glue that holds it all together”.

However, “some silly stuff” in the middle of the chain was robbing producers of profitability and direction.

“I don’t know about you but I don’t like driving 1986 model cars, I’d rather drive a brand new one.

“It is really frustrating as a producer doing all those things on farm that I think are right, and I put my hand on my heart and say they are, and my employees are exactly the same, and I know I have a customer who is excited about the product.

“.. (But) I‘ve got an issue where I can have the very best eating quality animal, and I know that his true chronological age which is not even an issue, he is actually younger than another animal, but because he has cut more teeth, I lose $350 a head.

“Multiply that over a few thousand head and it is serious money.”

AusMeat language review: Where is the process up to?

Butt shape part 3: Is it time for a broader grading/carcase assessment review?