Up until the mid 1980s, virtually all of London’s beef, lamb, pork and poultry requirements were directed through the city’s Smithfield market

CENTRAL London’s famous Smithfield market, which has been used by meat and livestock traders for more than 800 years, is expected to close in coming years and relocate to a site outside the city.

The general view is that the Smithfield site will disappear permanently – as a meat market, at least – within the next two or three years.

Given that the opportunity may no longer be available in a couple of years time, Beef Central paid a visit to the historic Smithfield site in October, while en route to the Anuga trade show in Cologne, Germany.

Arriving pre-dawn to catch the last couple of hours of daily trade, the cavernous Victorian-era trading areas still capture the buzz, energy and colour associated with markets like this around the world. Squint your eyes, and you could almost imagine you are in the old Central Meat Market in Tokyo, or New York’s Queens meat packing district. 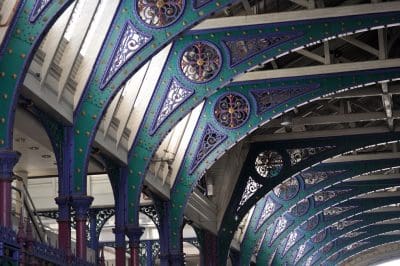 Market traders have been selling livestock and meat from the Smithfield site since the 12th Century. Originally an open field, the current complex of Victorian-era market buildings, framed in ornate wrought and cast iron, were built between 1866 and 1883. Two wings were built over underground railway sidings which originally enabled livestock to be brought directly into the markets by steam train. For most of the past century, however, slaughtering has taken place elsewhere, with carcases brought to the site to be broken-up and sold.

Beef Central was told that up until the mid-1980s, virtually all of London’s daily beef, lamb, pork and poultry requirements was shifted through the Smithfield complex. It ranked as one of the largest centralised meat markets in the world, and has been described as the grandest parade of Victorian and Edwardian market buildings in Europe. A simple indicator of the antiquity of some of the trader sites was the knife-wear seen on ancient wooden cutting blocks – in some cases carrying ‘depressions’ 15cm deep.

During our visit we spoke to a number of traders and customers still doing business out of the site, some of whom were third and fourth-generation Smithfield employees. Many were sad about the prospect of the complex closing, but philosophical about the reasons behind it.

Slowly, led by supermarket groups which changed their procurement to direct supply contracts with meat processors during the 1980s, Smithfield’s significance started to wane.

Today, it represents just a shell of what it once was, but trade continues on a daily basis through about 45 or 50 red meat leaseholders, and others for pork and poultry. Some remaining businesses, like Andre’s, can trace their origins at the site back a century or more.

One trader estimated that there were still perhaps a thousand people working daily in the complex, although this was only a fraction of the numbers involved in earlier times, when porters with their trolleys used to be as ‘thick as flies.’

Surrounding the market precinct are pubs and cheap restaurants that made their living catering for the Smithfield workers, often opening at 4am or 5am in the morning to catch the end of daily trading. 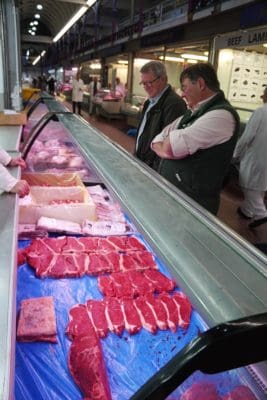 One of dozens of retail sites still operating out of the Smithfield market. Click on image for a larger view

Without exception, everybody we spoke to shared a deep affection for the grand, ornate site, and what it represents.

In 1174, Smithfield (or ‘smooth field’, as it was originally known) was described by William Fitzstephen, clerk to Thomas à Becket, as “a field where every Friday there is a celebrated rendezvous of fine horses to be sold, as well as swine, cows and oxen.”

Cattle were sold regularly on the site from 1305 and the Corporation of London gained the right to collect market tolls from the year 1400, although it was not until 1638 that a formal charter was granted. Cattle were driven to the market for sale from as far away as the Isle of Skye in Scotland.

It is written that the agricultural revolution of the 18th century brought extraordinary developments in animal fattening techniques, with the average carcase weights sold at Smithfield doubling between 1710 and 1795.

During the 1920s to 1950s, frozen beef carcases shipped from Australia were sold at Smithfield, some earning competition prizes. The Rea family from Kirknie, near Home Hill, have trophies earned from carcase competitions at Smithfield in the 1950s, when Australia was still bound under post-war meat supply agreements with the UK.

The current indoor market complex, providing room for hundreds of leaseholders, celebrated its 150th anniversary two years ago. Some of the Victorian buildings have been derelict for 30 years as meat trading arrangements started to change, and plans were raised to replace them with a public piazza with restaurants and cafes, as well as multi-storey office blocks.

The remaining tenant traders at Smithfield today typically have a small retail ‘shopfront’ and a cold store/boning room behind for wholesale work. Some are part of larger importer/wholesaler businesses.

Many specialise in a single species – pork, beef, chicken or lamb – or specialist lines like offals. Dozens of processors across Britain service the needs of the Smithfield traders each day, with carcases and carton meat.

Today, the majority of customers are restaurateurs, pub owners and smaller food service operators, but the general public is still welcome to visit and purchase small household orders. Some still make a visit to Smithfield market a weekly shopping event.

The number of independent retail butchers, who once provided the backbone of trade out of the site, has dwindled dramatically in the UK over the past 15 years, one trader said. Emissions charges on private vehicles entering the inner London area, which could amount to ten pounds or more per trip, had also taken a toll on householder trade from outlying districts.

“I love the history of the place, but logistically it is no longer an ideal way to run a business. Trying to get arctics (refrigerated vans) into London is a nightmare,” one trader said. Asked how retail prices at Smithfield compared with a UK supermarket or good quality independent butcher, traders said prices were a lot cheaper – at least 15-20pc on many cuts.

“For people buying quantity, it is still well worthwhile, but for a couple of steaks or some chops, it’s pretty pointless, unless they live close by,” one trader said.

Most leaseholders at the market worked on very narrow margins – in one case suggesting 7pc above wholesale, and a little more on sliced beef. Deals are often done on larger consignments. 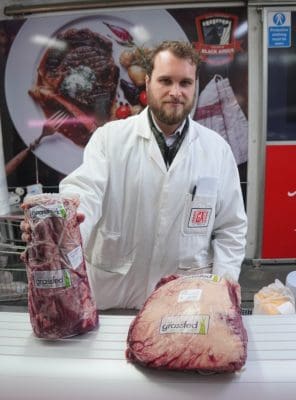 “The Australian beef has a great reputation for shelf life, and it’s like peas in a pod: every sirloin or scotch fillet is exactly the same, you know what you are getting,” George Abrahams Jr told Beef Central.

“A lot of people swear by Australian beef in this market, especially in the catering industry. It’s the best product we sell, by miles, despite the fact it is cheaper than a Scottish product that is only a four hour drive away. With British beef, we’ll often see one bad item in a box of primals, but with Australian, you can open a hundred boxes and they are all the same. Packaging and presentation also, are fantastic. Many of the west-end restaurants in London now rely on Australian beef,” he said.

But the current beef import quota arrangements made trading difficult, Mr Abrahams said. “We have to plan ahead, and prices can change dramatically between when we buy and sell the meat six weeks later. It presents challenges,” he said.

Most of his business’s trade was with middle-men wholesalers, restaurants, smaller manufacturers and butcher shops. The business turns over 500-to 800 lambs a day, plus beef and pork, and employs about 20 staff on site.

Much of its trade these days was in carton meat, although some operators still specialised in carcase meat, breaking bodies down to customers’ requirements in rooms behind their display.

Dry aging was common on many trade sites at Smithfield. In one startling example – albeit a novelty – a loin had been dry-aged almost 12 months, losing 3kg in weight from its original bone-in primal weight of 11kg along the way.

Asked about aging in vacuum-packaged form (as widely seen in Australia), Mr Nelson said he “could not see how that worked.”

“We put beef into a vacuum bag for longevity, not to improve eating quality,” he said.

“But a lot of our restaurant and hotel customers these days want to dry age the beef themselves, using their own dry-aging cabinets,” he said. 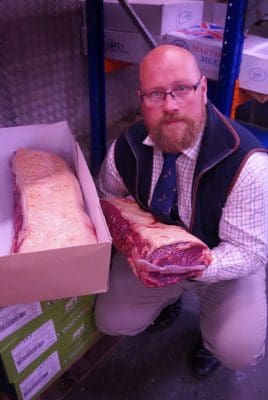