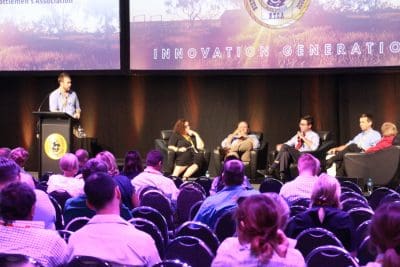 During a panel session at Friday’s NTCA conference Mr Smith said the reason Australia had been able to commit to the international treaty under then Prime Minister John Howard was because of controls that had been placed on broad scale tree clearing in the State.

“So industry has already contributed greatly to this and it is something that is ongoing, but there is never any compensation for that,” Mr Smith said.

“To expect our industry to go forward and develop particularly in the north, we need to have the conversation that you need to have development, and it has to be sustainable.”

Mr Smith said it was time for Australia to have a decent conversation about how to go forward with vegetation management “based on science and facts”.

“I think we need to get off this band wagon of them and us, that it is either the environment or the industry.

“There is talk about this (cattle) industry and that we use all the water or use all the resources.

“The last time I looked you can’t grow a lettuce at Cloncurry but you can run cattle. It is suited to that environment.

“Extensive rangelands are suited to running ruminants. If you lock that country up, you are going to get is wildfires. which is detrimental. We are part of the solution.” 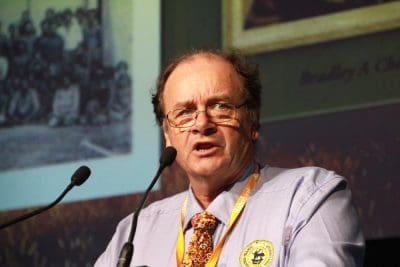 Earlier in the conference outgoing NTCA president Tom Stockwell also lamented the lack of science in the carbon debate.

The northern cattle industry was based on a biological system relying on the top six inches of soil, rain, underground water, pasture, and cattle, and “all managed and husbanded by informed productive people that have a plan that deals with today and the next generation”.

As he did in his speech last year, Mr Stockwell drew attention to data showing that North Australia is a net sink for Carbon Dioxide.

Satellites which record atmospheric CO2-e from the earth’s surface to the top of the atmosphere show that every year, on every hectare in North Australian woodlands, 2.2 tons of CO2-e is sequestered, mostly though woody thickening.

With every increase in wood came a rapid decrease in grass.

He quoted from a recent submission by rangelands scientist Dr Bill Burrows, a Fellow of Australian Academy of Technological Sciences and Engineering, to the Climate Change Review: “Australia needs to proudly proclaim to the world that it has most likely reached the holy grail of GHG reduction by achieving ‘zero net emissions’. This comes about by virtue of our huge vegetated land mass, coupled with a relatively small human population.

“Yet we appear to be embarrassed by this good fortune and seem to want to keep these advantages hidden. It’s time for the self-flagellation and misleading grandstanding on this issue, by all Australian governments, to stop.”

Mr Stockwell said that despite huge actual CO2 sequestration, in Australia we “pretended that managing woody thickening was a sin”.

“The northern beef industry has borne the cost of Australia’s commitment to the Kyoto protocol and we now know that we have a positive sequestration story to tell, and a significant sustainability issue if we do not control woody regrowth and allow sensible planned clearing as a management response.”

Mr Stockwell compared the lack of science used by decision makers in the modern carbon debate to the same lack of science that saw England refuse to accept that human waste was a cause of cholera in the 1800s, preferring instead to accept claims by lawyer Edwin Chadwick that smelly air was responsible – click on slide below to view comparison: He also took aim at ongoing attempts by environmental groups in the Northern Territory to stymie or delay clearing on pastoral leases that had been through a rigorous approval process.

He said attempts by the Environment Centre NT and Environmental Defenders Office to use court proceedings claiming potential of clearing to affect climate change seemed frivolous given the actual data now available. “But if it progresses may actually allow the facts to be put,” he said.

“I would like at this stage to acknowledge the professional work of Pastoral Land Board and dedication of the members.

“They apply experience, qualifications, and technical knowledge to the application of the Pastoral Lands Act, which provides a solid legislative backbone for the pastoral leasehold land in the NT.”

Week of rallies to protest against vegetation laws

In Queensland a week of direct action opposing the Queensland Government’s proposed veg management laws has been organised including:

AgForce president Grant Maudsley said anyone concerned about Queensland’s economic future and farmers’ ability to keep producing food to show their support at the rallies this week.

“We’re calling on the Queensland Parliament to reject these flawed laws and instead work with those most affected by the changes to come up with a long-lasting solution that delivers good outcomes for both agriculture and the environment,” he said.

Mr Maudsley said a groundswell of anger was building over the proposed changes with the community protests co-inciding with five Parliamentary committee hearings being held in regional Queensland over three days this week.

“These laws are the worst of both worlds. The Palaszczuk Government will make it harder for farmers to grow food and they won’t deliver the best environmental outcomes either,” he said.

“At a time when global demand for our great food and fibre is at all-time high, these laws will shut down new agricultural development opportunities in Queensland.

“Farmers just want fair and workable laws to grow more food, create jobs and look after their environment without being strangled in red tape. It’s pretty simple – if farmers can’t feed their own families, they can’t feed yours.”

More details about the Parliamentary committee’s public hearings and their inquiry are available at: http://bit.ly/2IjmU0H