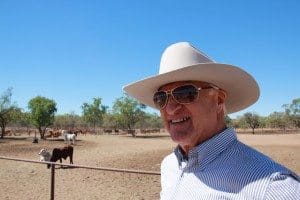 North Queenslasnd MP Bob Katter says he has written to the Prime Minister and the Minister for Defence calling on them to urgently allow graziers affected by drought access to the Townsville Field Training Area which spans 200,000 hectares of unharvested land.

Calls for military owned grassland to be opened to drought-affected cattle for grazing have been growing louder in recent months. Townsville livestock agent Tim McHugh raised the issue earlier this year while Mr Katter said he and other State members of the Katter Australia Party have met with Government ministers several times over the past year over the issue.

“In my representations on this issue, all of the military personnel I spoke to were positive towards the graziers’ proposal.

“It is only the administrative wing who were resistant – those same administrative personnel who don’t have to face up to public opinion or expose their Government to the violent and fully justified criticisms that are now coming.

“We have had three straight years of drought.

“Neighbouring cattlemen have made their stations available to the army for manoeuvres continuously over the years, they have never asked anything in return or any compensation for their airstrips and roads being used.

“As an instructor in the militia through the war years in Indonesia and Vietnam, you endeavour at all times to carry out manoeuvres in real time situations and there is very little land anywhere in Australia where there are not cattle.

“There is not a person that is not now considering the Federal Government to be dog in the mangers and people that are totally insensitive to the plight of the suffering of many North Queenslanders.

“We would point out to the Government that if the political wing was to intervene here, they would be heroes not only to North Queensland, but also to the soldiers who have been wrongfully held responsible for this decision,” Mr Katter said.

In response to Beef Central’s questions on the issue in April, a Department of Defence spokesperson said Defence training areas were generally unsuitable for livestock agistment due to safety and environmental concerns, as well as conflicts with ADF training activities.

Defence owned land in the region was also scheduled for heavy use in support of a large number of ADF exercises.

The spokesperson said all requests for civilian use of Defence land are considered on a case by case basis.

Requests can be submitted via the Defence Assistance to the Civil Community process, with applications to the Joint Operations Support Staff(JOSS) located in each State.  Northern QLD JOSS can be contacted on joss.nq@defence.gov.au.