THE diversified global nature of the world’s largest meat processor, JBS, paid dividends with a set of solid financial results reported this week for the company’s full year ended December 31.

Whereas a year earlier, JBS’s Australian operations were one of the star performers, the cycle has turned somewhat and the company’s US beef operations are now benefiting from greater access to slaughter cattle and lower US cattle prices.

Across the company’s entire beef, pork and chicken processing, and value-added operations in North and South America, Australia and Europe, JBS reported pre-tax earnings last year of A$4.75 billion (down 15.1pc), net revenue of A$71.57 billion (up 4.6pc), and net income of A$158 million. Gross profit was A$8.94 billion, 5pc lower year-on-year. JBS global chief executive, Wesley Batista, said the company’s 2016 year was focused on consolidating recent acquisitions and implementing the company’s strategy to generate value through the expansion and diversification of its portfolio of value-added products. Attention also continued to focus on enhancing the recognition of JBS brands in each business segment and region.

Moves to diversify the company’s production platform, proved once again to be an important competitive advantage.

“The significant scope and scale of JBS’s global operations provided access to raw materials in different regions, while also providing access to every consumer market in the world,” Mr Batista said.

Importantly, this strategy had enabled the company to mitigate volatility, whether associated with commodities cycles (ie cattle supply in Australia), challenging macro-economic scenarios in certain countries or regional commercial or sanitary barriers.

“We have been able to leverage the considerable advantages of our global scale, creating a resilient business model that consistently delivers solid results,” he told shareholders.

“In 2016, when analysing our performance by region, we experienced a recessive economic environment in Brazil, which negatively impacted domestic consumption. In addition, the strengthening of the Real vs the US$ had repercussions for our exports.”

The reduction in the supply of inputs, particularly corn, presented JBS with a challenging scenario, impacting profitability of its poultry, pork and prepared foods business units.

In the US, a cycle of greater cattle availability has begun, which has contributed to a substantial improvement in the results of JBS’s US beef business unit during the second half of the year. US beef exports were already showing significant growth in the first months of the 2017 year (+25pc year on year) and imports into the US were declining.

US beef division results, including Australia

Within the JBS USA Beef division (which includes operations in Australia and Canada, which are not reported separately) net revenue last year totalled A$26.72 billion, down 7.1pc compared to 2015. Pre-tax earnings were A$614 million, 20pc lower than the previous year, as a consequence of the challenging results recorded during the first half of the year in the US operations, offset by a positive performance during the second half of the year.

In the US beef business, the increase in cattle availability and the reduction in cattle prices contributed to a decrease in raw-material costs during the second half of the year, which, coupled with an increase in domestic and international demand, allowed for a margin recovery in the country.

In contrast, operations in Australia continued to be impacted by the lower availability of cattle, which contributed to a reduction in slaughter numbers during 2016.

However despite declining performance later in the year, the company managed to maintain positive margins during the full 2016 year in Australia, due to an increase in sales prices and management focus on profitability.

The company expects its beef business in the US to improve margins in 2017, driven by a recovery in cattle availability and increased exports, company executives told analysts.

“We will see margins in the US that we have not seen in the last few years,” USA division chief executive André Nogueira said. The positive cycle for the cattle business in the US started at the end of 2016, he said.

“In Australia, we have a strong, diversified business with highly recognised brands, where we continue to increase our presence in the prepared foods segment,” Mr Batista said.

“In addition, the Australian business unit holds significant relevance to the company’s growth strategy, given its ability to serve the North Asian markets, where protein consumption is increasingly higher and more sophisticated.”

The company’s US pork business, the second largest in the world, recorded impressive increases in both revenue and profitability, while the US poultry business unit continued to perform well as a result of increased demand in both the domestic and export markets.

In Europe, JBS successfully expanded its presence with a portfolio of innovative and higher value-added products, which would serve as a ‘benchmark’ for future innovative product launches in other global regions, Mr Batista said.

Mr Batista said JBS had made important progress in sustainability during the 2016 year, now a ‘fundamental factor’ in all of the company’s business units.

“As an example, in Brazil we launched the sustainable hamburger, whose production process follows strict social and environmental criteria,” he said.

In Europe, the company’s Moy Park division had been recognised for its food safety practices; and in the US, excellent results had been registered from efforts related to animal wellbeing.

In 2016, JBS made an important leap in its evolution into becoming a true global food company through the creation of JBS Foods International – a subsidiary that consolidates all of the JBS global businesses outside of Brazil and Seara.

One of the points of interest in statistics in JBS’s 2016 financial results was the distinct shift in destinations for the company’s export meat trade. 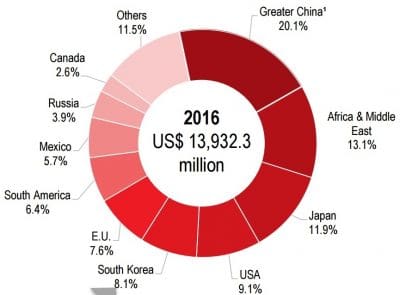 In the pie chart published here, Greater China has moved strongly upwards in JBS’s export business ($ value statistics drawn from all production centres in South and North America, and Australia).

Access to China for Brazilian beef, gained in late 2015, is part of the reason for the shift.

Meanwhile JBS’s exports to the US from other production centres (principally Australia) have fallen 10.7pc between 2015 and 2016.

Japan has grown from 10.7pc to 11.9pc of JBS’s export trade, large as a result of resurgent US exports last year, as has Korea, up from 6.2pc to 8.1pc of the total value last year.

Markets like Russia, which are not accessible to Australian exports since bans were imposed by President Putin in 2014 as a retaliatory move, but which continue to be serviced by JBS operations in Brazil, remain unchanged, in percentage terms, at 3.9pc share.