Along with some other large grainfed supply chains, JBS has for years offered a voluntary pre-vaccination incentive payment for feeder cattle suppliers, recently $15/head on top of the standard price. Between 35pc and 40pc of feeder cattle entering the company’s NSW yards have been supplied under the previous voluntary incentive, Beef Central was told.

An announcement this morning said the company’s three NSW feedlots – JBS Prime City, JBS Riverina and JBS Caroona – will from 1 September only accept feeder cattle that have been pre-vaccinated with a single shot of Bovilis MH+IBR, to help control the effects of BRD. 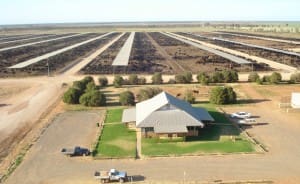 The move has been endorsed by global quick service restaurant giant, McDonald’s – one of JBS Australia’s largest end customers.

JBS’s three NSW feedyards have a combined capacity of around 110,000 head, and if fully executed, the new commitment could cover well over 200,000 fed cattle each year.

The company told Beef Central the pre-vaccination commitment will not be applied in its Queensland yards, including Beef City and Mungindi, because of different climatic and feeding conditions, and different breed types involved. British-type cattle tended to be more susceptible to BRD than other breed types, and the company’s southern yards had more ‘clearly defined’ seasonal cycles that could contribute to BRD challenge.

The Brazil-based JBS parent company recently launched its global sustainability commitment (see earlier story), including an animal welfare component as one of its key features.

“JBS Australia takes the health and welfare of the cattle in its care seriously, and is striving to do everything it can to reduce sickness and mortalities in its feedlots,” the company statement said.

The company said it believed that the cattle industry had a responsibility to drive animal welfare improvements, and pre-vaccination of cattle on-farm prior to feedlot induction was the best defence against BRD.

The company has stipulated the use of a single vaccine product – Coopers Bovilis MH+IBR – to “help prepare cattle for when they arrive at the feedlot and help protect them from BRD-related sickness, reducing the risk of mortalities.”

“This allows JBS to focus on maximising the performance of cattle and lead the way in animal welfare best practice,” the company said. 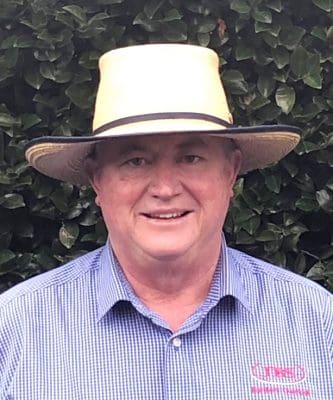 JBS Australia’s northern livestock manager, Scott Carswell (JBS Northern has responsibility for the company’s feeder cattle procurement across the eastern states), said the critical point of BRD prevention in cattle happened on-farm, prior to feedlot induction. This made BRD pre-vaccination the “last piece of the puzzle” in terms of striving for the highest animal welfare standards.

“The risk of BRD is at its peak in the first couple of weeks at the feedlot, and the critical point of prevention happens on-farm prior to feedlot induction,” Mr Carswell said.

Vaccinating prior to feedlot entry with Bovilis MH+IBR had two main benefits, he said. Firstly, when cattle are pre-vaccinated in an unstressed environment, they are expected to develop a better response to the vaccine. Secondly, and most importantly, pre-vaccinated cattle have a higher level of protection at the time of maximum risk, which is immediately following feedlot induction.

“That’s why we are making it mandatory,” Mr Carswell said.

Under the new guidelines, from 1 September all cattle entering JBS feedlots in NSW will be required to have at least one shot of Bovilis MH+IBR from 180 days to 14 days prior to induction. JBS will administer the second dose during the induction process.

How this company requirement plays out in an extremely tight feeder cattle market this year is yet to be seen. JBS says it will continue to pay a premium for Bovilis MH+IBR pre-vaccinated cattle of $15 a head.

“At the end of the day, it’s a win-win situation for producers,” Mr Carswell said. “They get paid to pre-vaccinate with a product that could improve the performance of their cattle on farm, and we get healthy and high-performing cattle delivered to our feedlots,” he said.

With Bovilis MH costing $7.50-$8 a shot, the net return to producers for applying the treatment will be about $8.

“McDonald’s is committed to working with suppliers that share our commitment to improving animal health and welfare practices,” the company was quoted as saying in JBS’s statement. 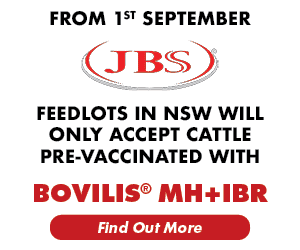 “JBS Australia’s pre-vaccination program across its NSW feedlots will help accelerate the beef industry towards a greater level of best practice, and positively reduce the use of antibiotics in the beef supply chain,” McDonald’s Australia said.

JBS said it would take a stepped approach to implementing the pre-vaccination program prior to the mandatory 1 September cut-off. In the lead up to the cut-off date, JBS will continue to receive cattle during August that have not been vaccinated, but will apply a 5c/kg liveweight discount to these cattle. For all cattle that have been pre-vaccinated, JBS will continue to pay a $15 premium per head to cover the materials and labour cost of vaccination with Bovilis MH+IBR.

While there are other BRD vaccines on the market including Zoetis’s MH One Shot, JBS Australia wants all cattle to be pre-vaccinated with the Bovilis MH+IBR vaccine, as it is “the only vaccination available in Australia that protected against both the two main pathogens that cause BRD.”

“JBS has been using the two-shot Bovilis MH+IBR protocol for many years, and has found it is the gold standard when it comes to BRD protection,” Mr Carswell said. “Bovilis MH+IBR reduces BRD-related sickness and mortalities, and also reduces the use of antibiotics in our yards.”

“It’s a no-brainer for us to shift this from a voluntary to a mandatory vaccination scheme,” Mr Carswell said. “In fact we have had feeder cattle suppliers asking us for some time why we haven’t already made the move.”

Asked whether the new company requirement could threaten feeder supply in an already desperately tight market, Mr Carswell said he looked at it this way: “the vaccine itself costs $7.50 to $8 a shot, and we have committed to paying $15 a head. And we have large suppliers who have been practising two-shot Bovilis vaccination for years, because of the production benefit they see on-property. The earlier they do it, the more benefit they see.”

“It might not be the ideal time to be implementing this program, in terms of the cattle supply cycle, but we are already paying record prices for feeders (see today’s separate story) so it is a bit of extra insurance for us (against morbidity and mortality) and if vendors are going to do it, it’s extra insurance for them,” Mr Carswell said.

For feeders that have received two shots of Bovilis on-property, JBS said it would offer 12 months from the second shot, for delivery, to still receive the bonus.

Australian Lot Feeders Association president Bryce Camm said the JBS program was the first mandatory BRD vaccination program that he was aware of in the Australian grainfed industry, and reflected the growing industry awareness of best practise on animal welfare.

BRD is a devastating respiratory condition affecting cattle of all ages and the leading cause of mortality within the cattle industry. There are two main pathogens that cause BRD, Mannheimia haemolytica (MH) and Infectious Bovine Rhinotracheitis Virus (IBR). Both pathogens are known to cause BRD, but IBR in particular can spread rapidly when cattle are stressed due to transport, mixed with other cattle from different farms, and introduced to different feed. Click here for earlier BRD story.