Are Australia’s biosecurity measures and preparedness levels for a threat such as foot and mouth disease adequate? 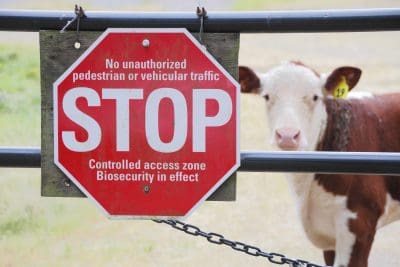 That question is currently being tested by an inquiry of the Rural and Regional Affairs and Transport committee Senate Standing Committee.

With more than 70 submissions from interested organisations and parties now published, it is clear many believe the answer is “no”.

Various submissions point to gaps in the biosecurity system that have been identified by previous independent reviews, and a lack of an effective response by Federal Governments in the years since.

Concerns identified include outdated biosecurity processing procedures, a shortage of veterinarians, limitations with current livestock traceability systems, gaps in surveillance of diseases in wildlife and inadequate penalties for biosecurity non-compliance.

A number of submissions point to previous reviews that have highlighted gaps in the biosecurity system and a lack of effective Government responses.

For example an Australian National Audit Office submission (click here to download as a PDF document) draws attention to a review by the Auditor-General in 2020-21 which rated the Department of Agriculture’s arrangements to respond to non-compliance with biosecurity requirements, and its compliance framework, as “largely inappropriate”.

A Freight and Trade Alliance submission points to an Inspector-General of Biosecurity report in February 2021 which showed the biosecurity system is not in a strong position to address diverse and evolving biosecurity risks and business environment expected to prevail through to 2025. Despite this says an outdated biosecurity processing system is still in place.

The Australian Veterinary Association submission acknowledges the Government’s recent work to ramp up biosecurity measures at borders and cargo and mail centres, but adds that the contribution of vets to emergency animal disease surveillance and preparedness remains insufficiently recognised and supported.

“We believe that government and industry have not developed an effective response to the issues identified by the Frawley (2003) and Matthews (2011) reports, and the findings of the 2015 World Organisation for Animal Health (OIE) Performance of Veterinary Services (PVS) audit.”

As covered in an earlier Beef Central article, in March 2020 SAFEMEAT made five recommendations to the Federal Government to improve Australia’s livestock traceability system.

It calls for adequate resourcing of public-private partnerships between the government and private veterinary sectors, and a coordinated framework to ensure adequate veterinary capacity for disease surveillance, prevention and control.

In its submission SAFEMEAT acknowledges that work is underway at the request of agricultural ministers, but urges immediate action to implement the recommendations to ensure Australia has critical infrastructure in place, including improvements to the current sheep and goat traceability system operating across Australia and the establishment of a framework for managing the Australian livestock traceability system.

“SAFEMEAT has highlighted that there is significant risk associated with inaction, particularly in the context of FMD,” the submission states.

“If implemented, SAFEMEAT’s recommendations will ensure that the integrity of Australia’s livestock industries is upheld, set a foundation that will fulfil the biosecurity objectives of the Commonwealth government, and cement Australia as the global leader in livestock biosecurity and traceability systems.”

The Cattle Council of Australia says there is a need for an immediate strengthening and bolstered resourcing of biosecurity, including a substantial increase in biosecurity detector dogs for increasing volumes of incoming passengers, mail and cargo, and focus on early detection, particularly for exotic disease transmitted by airborne vectors such as Lumpy Skin Disease.

Its submission also calls for continued support for Indonesia to contain and eradicate FMD and LSD, the development of livestock vaccines and rapid diagnostics, and the development and implementation of a sustainable long-term funding model for biosecurity, and nationally consistent livestock traceability.

A submission from a group of livestock producers led by NSW sheep and cattle producer Angus Hobson  argues that Australia’s biosecurity system is underfunded and inadequate to exclude or mitigate an FMD incursion.

Mr Hobson said the group believes federal and state government and industry bodies are overestimating Australia’s ability to rapidly efficiently control and eliminate an FMD incursion, and underestimating the speed with which the nation could re-establish market access. (See separate article on their submission here)

The red meat sector’s Integrity Systems Company highlights a need for a “greater sense of urgency”. Its submission says the National Biosecurity Strategy released in August 2022 is imperative to drive greater coordination of efforts to manage biosecurity at a national level, strong accountability is also needed.

“Key feedback provided by ISC on the draft was the need to instil a greater sense of urgency into the strategy. Concern remains that there is an element of complacency in the strategy given the protracted nature to develop the implementation plan.” It adds that references to “a 6 to 12 month planning stage” in the strategy seems excessive, given that the nature of the issues to be addressed within the strategy are clear.

“It will also be crucial to ensure industries such as red meat and livestock are adequately represented and involved in the governance structures and implementation planning which has not yet been confirmed.”

The ISC submission also points to a need for stronger penalties: “Too often industry is observing inadequate penalties applied under State traceability legislation, which also impacts on the effectiveness of biosecurity control measures that are in place to mitigate risk.

“As an example, a Victorian producer seriously compromised the national traceability system by falsely documenting the place of birth of livestock being prepared for export. The producer received a two-year undertaking to be of good behaviour, and also ordered to pay costs of $135.82. This was after a court case that spanned almost 2 years.”

In addition to reinforcing the case for urgent implementation of the SAFEMEAT traceability recommendations, the Red Meat Advisory Council says 2022-23 is the time to initiate a largescale aerial shooting and ground based poisoning and trapping program for feral pests.

“The fact these feral animals have been able to expand to such large numbers and vast distribution represents a long term failure of state /territory feral animal regulation and control/eradication programs,” its submission states.

A group comprising 33 former Chief Veterinary Officers and Senior Government Veterinarians says the Federal Government should act now to adopt a ‘one health’ approach to managing the health of humans, animals and the environment, in recognition that “human, animal and environmental health are intrinsically linked”.

While several factors have significantly increased the global risks of epidemic diseases in Australia, the COVID19 pandemic has exposed gaps in current response systems.

The “One Health” call also directly supported in the submission of the Australian Academy of Technological Sciences and Engineering (ATSE).

The Department of Agriculture, Fisheries and Forestry’s 76-page submission  provided a comprehensive overview of the history and current status of Australia’s biosecurity system.

It notes that since FMD was detected in Indonesia, a number of enhanced actions have been put in place at the border, in addition to financial and technical support to aid Indonesia’s response to both FMD and lumpy skin disease (LSD).

“Preparedness activities have also been escalated in Australia – through the establishment of an Exotic Animal Disease Preparedness Taskforce that has conducted exercises with the states and territories, the appointment of a national animal disease preparedness coordinator, completed trade impact analyses for FMD and LSD, and completing, in consultation with industry, a Draft National LSD Action Plan.”

The CSIRO submission outlines the role it plays in biosecurity preparedness and includes a call to be given approval to bring live Foot and Mouth Disease into the Australian Centre for Disease Preparedness (ACDP) in Geelong.

“The ACDP was built with outbreaks such as FMD in mind. If an outbreak of FMD were to occur in Australia, ACDP has emergency plans in place to respond, as well as extensive experience responding to other outbreaks and pathogens to draw upon

“CSIRO asserts that if access to the FMD virus was made available to Australian Centre for Disease Preparedness facility (ACDP) in Geelong, this would significantly improve Australia’s capacity to prepare for and respond to FMD outbreak threats.

“Access to the live virus would allow improved national and regional surveillance, along with the ability to develop new diagnostic tools and future next generation vaccines including an mRNA vaccine for FMD.

“Currently there are no laboratories in Australia authorised to attempt isolation of FMD or to work on the live virus.

“Any work CSIRO researchers conduct on the live virus is completed when they visit collaborators overseas.

“CSIRO, through ACDP- a high-containment facility designed to allow scientific research into the most dangerous infectious agents in the world – has all of the biosecurity processes and technical capability in place to work on the live virus while ensuring containment within the facility.

“Specifically, ACDP can perform vaccine typing, improve diagnostics and develop improved vaccines. It can also receive samples from the region, to better inform risk and preparedness.”