A Hopkins Transport Australia truck at the company’s Tamworth headquarters.

Livestock transporting companies don’t often come as unique or specialised as this.

Every day Tamworth-based Hopkins Transport Australia has some 27 trucks on the road transporting fragile cargoes of fertile eggs and day-old chicks from hatcheries to growing farms all over eastern Australia.

And nor do many trucking companies employ the same proactive approach to driver training and safety as Hopkins Transport Australia. 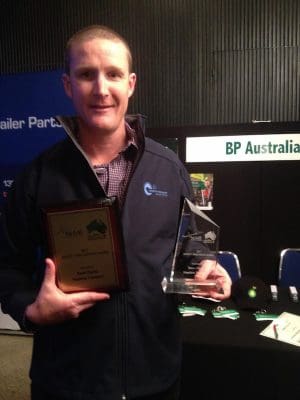 Dean Clarke with his awards

12 months ago, company driver Dean Clarke approached the owners Steve and Geoff Hopkins with a plan to roll-out a company wide driver training and safety program.

Steve and Geoff backed the plan, under which Dean has become a full-time trainer for all Hopkins Transport drivers.

The program has delivered significant benefits for the company and its drivers, including improved safety, reduced breakdown and repair costs and a positive attitude from drivers as valued representatives of their company and industry.

In a business where attracting and retaining drivers can be a major challenge, Hopkins Transport is now seen as an employer of choice for drivers due to its genuine commitment to ensuring the safety and welfare of its employees.

“The job of our drivers is to get home safely,” Mr Clarke said.

‘The job of our drivers is to get home safely’

“We definitely don’t put anyone in a situation where they are going to be out of their depth. This is all about showing them good habits and the correct procedures right from the start, and learning safe ways to do things that a lot of guys only learn the hard way.”

A key part of Mr Clarke’s program is providing the drivers with the real world experience before they get their Heavy Combination (semi-trailer) licence, including more than 60 hours one-on-one training followed by ongoing reviews every month for 12 months. This is designed to ensure that once drivers hit the road by themselves they are comfortable and not a risk to themselves and other road users.

Safety investments should be rewarded through reduced charges

Mr Clarke said there is a significant need for similar programs to be rollout across the industry, but financial constraints in the highly competitive, low margin business meant adequate driver training was unfortunately too often overlooked. 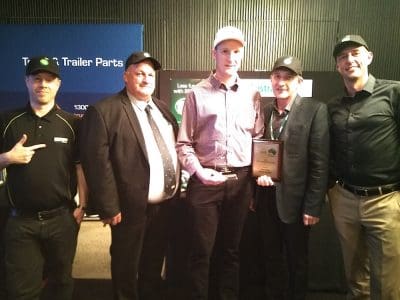 For that reason, he and the owners of Hopkins Transport Australia believe there is a strong case for insurance companies and the Government to take the lead in fostering greater investment in similar safety programs across the industry.

They believe companies such as theirs that proactively invest in driver training and road safety should be rewarded through reductions in prohibitive industry costs such as insurance, workers compensation, payroll tax and registration charges.

Reducing those costs would provide a powerful incentive for other companies to invest in similar training programs, they argue.

“We would like to see this rolled out to other transport companies and to get Government on board,” Steve Hopkins said.

“Personally I think that driving skills and being able to obtain a license to control a heavy vehicle, there is not the effort put into training across the industry that there should be.

“You are not going to remove the risk, but you can reduce it, and insurers and Government agencies should recognise that.”

Mr Hopkins said the company was very proud of Mr Clarke’s achievements and were thrilled with the national recognition for his work.

Mr Clarke said he plans to use the $5000 prize money from the national award to undertake a psychology course to further enhance his driver training skills.