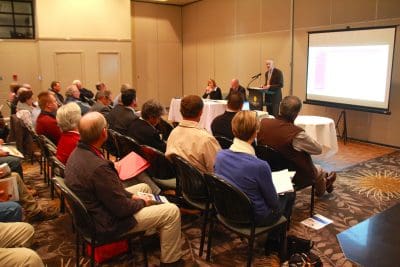 Producers have spoken out about what they see as “prehistoric” methods used to determine the final value of their cattle, at an Australian Competition and Consumer Commission hearing into cattle and beef markets in Toowoomba.

Under its new Agriculture Unit established last year and headed by Australian Farm Institute CEO Mick Keogh, the ACCC is conducting a specific examination of competition issues in the cattle and beef market.

ACCC chair Rod Sims said the study is examining whether cattle and beef markets in Australia are “working as they should”. The study is looking at where market power exists and the consequences of that power, and whether sufficient transparency exists in the market, he said.

“Actions (by the ACCC) could be by way of Government policy change, by way of suggesting to industry different ways of doing things, we may find a few breaches, we may just shine a light on a few things,” he explained to an audience of about 50 in Toowoomba on Friday.

The ACCC study has so far received 60 submissions and the commission is now conducting a series of public forums around Australia.

The first was held in Wodonga on June 7, Toowoomba followed last Friday, and more will come at Mount Gambier on June 20, Dubbo on June 24 and Bunbury on July 1.

A show of hands indicated that about half of the 50 or so people present at the Toowoomba City Golf Club were cattle producers, with several agents, cattle buyers, meat processors and ACCC staff making up the balance.

Stakeholders from both ends of the supply chain offered contrasting opinions on the same issue at different times, but the discussion, led by the ACCC’s agricultural commissioner Mick Keogh, was constructive and free of hostility.

The uncertainty producers face in having to wait until their cattle are processed, trimmed, graded and weighed before finally knowing what price they will receive for their product, and the independence of the people who make those decisions, dominated much of the discussion.

Crows Nest cattle producer Mark McLean told the forum he sells half of his cattle to saleyards and half direct to works.

Both channels involved uncertainty, he said.

“You can watch the market like a hawk and try and read it, then turn up at the sale and it is like all the buyers have had their heads together and it has dropped 20c/kg,” he said.

“I can sell bullocks (direct to works) that are peas in a pod and I can have some with fat coverage of 20mm and one with 40mm, and there is no way in the world we could get 40mm of fat on those cattle.

“I don’t know if you have seen the method of assessing fat depth, a scalpel and ruler, it seems archaic that that is the way you would grade an animal someone is getting paid on.

“And there is such variation. You push the scalpel too hard, you go into the meat, and of course you are measuring that.

“You wonder if the graders shouldn’t be totally independent of the works. It seems to me to be a way of discounting the cattle, particularly when the cattle are fairly dear, is to grade them harder.”

Lawyer Dan Creevey from Creevey Russell Lawyers in Toowoomba said the “inconsistency and the arbitrariness” of the grading system was a significant concern for his producer clients.

“The fact that there is just no independence and objective assessment of the cattle is a really significant problem for my clients,” he said.

‘At three o’clock in the morning in a cold room, he has got to be shaking a bit’

“At three o’clock in the morning in a cold room, he has got to be shaking a bit, and he is measuring our fat,” Mr Hawkins said.

“He might be the best man in Australia and experienced and does 10,000 a day, but how prehistoric is it?”

Bell district producer Allan Sorley said in his experience, meatworks welcomed producers being present to watch their cattle being processed and graded.

“In any of the abattoirs I have been to, and I have been to a few, they all let you go and see the cattle killed and graded in front of you, not at 2am in the morning in a cold room.”

An ACCC spokesperson asked if producers had a right of appeal if they felt the grading results on their cattle were not accurate.

Mr Hawkins said he was not aware of a producer ever having “had a win” on that score. Mr McLean said that when he asked the meatworks about one bullock that had measured 40mm of fat when all of the others in the same mob had measured around 23mm, he said he was just told “that happens some times”.

“No admission of any problem at their side, just that my animal was wrong.”

Mt Booroomen producer Cameron McIntyre said he was aware of one producer who had 100 cattle graded for MSA but after being re-graded within the meatworks to the works own standard, “only one of the 100 got through”.

“We sell all of our cattle to processors, and they do a particularly good job, but I think independent graders are the issue, it is them and us,” he said. 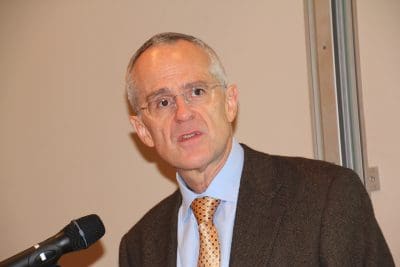 With grading issues, it was imperative that both sides – producers and processors – had equal input, he said.

“Unless we have independent graders used to the benefit of industry to take the friction out, nothing is going to change.”

Mick Keogh said Ausmeat’s position was that independent graders and processors are independently audited by Ausmeat.

Mr McIntyre said the current system was not working and asked the ACCC to check if processors were given any notice as to when auditors were arriving at their plant, or if audits were conducted randomly.

Kurt Wockner, the livestock manager of Oakey Beef, told the forum that meat graders were human and as a result mistakes sometimes occurred.

But, speaking for his company, any issues were typically and quickly solved over the phone.

“You might get the odd one (grading mistake) which is inevitable, but 99pc of the time we sort it out over the phone, so there is no real need for any great hullaballoo over it in my belief,” Mr Wockner said.

“Generally we come to an arrangement amicably and without any great debate.

“You have got to have a good relationships with your clients, if you get a bad name if doesn’t do you any good either.”

Mr Keogh asked if commission buyers, when buying at the same sale for several different customers, were competing fairly or reducing competition.

Bell producer Alan Sorley said he hated to think what would happen to smaller sales if commission buyers could not be used. Customers would not send their own buyer a long distance to buy at a smaller sale.

Hughenden producer Charlie Hawkins said supply and demand dictated the extent to which commission buyers impacted on levels of competition.

“When there is no cattle, when the supply is short, they pay, but where there are heaps of cattle, there is a little bit more swapping round, buying a pen of cattle and sending them three ways.”

Cameron McIntyre urged the ACCC to attend a sale to view commission buyers in action for themselves – but not wearing a suit.

‘If you blokes are serious, don’t go up there with a shirt and tie on’

“If you blokes are serious, don’t go up there with a shirt and tie on, go up there in a pair of jeans and dirty shoes, and walk into Gracemere, and just watch it.

“You don’t have to be too smart to see that when there is a big mob of cattle, and you’ve just got a few blokes buying for at least eight to 10 people each, they can control the price.

“When there are more numbers there they will drive it right back, and for you to operate you have got to actually buy your way in on the day, bully your way in, pay for a few dear ones, and they will stand back and then have a go, and that is the reality of it.”

In response to a question about whether people supported the introduction of US style mandatory price reporting legislation in Australia, lawyer Dan Creevey said his clients were very supportive of the concept.

Mr Creevey said it was about transparency and the ability for producers to truly know what the price is and to be able to compare prices.

“Over 70pc of our cattle are export and you will be telegraphing that price to the entire world, and if we actually believe that is a good thing, it may come back and bite us,” he said.

“You have five major markets outside of this country looking at what we are paying for cattle, and they will apply pressure to us like we have never seen.

“I think we need to be extremely careful about that, because putting in mandatory price reporting for one reason might actually have substantial unintended consequences, it is the unknown unknown.”

CQ cattle producer Cameron McIntyre said producers wanted transparency so they could know the price of the raw product being paid by the meatworks and the price of the processed meat at the other end.

Australia’s many customers overseas already knew what cattle prices were in Australia, he said. “The Japanese know what goes on in Australia, they know if it is going to rain in Australia before we do.”

Kurt Wockner from Oakey Beef said he thought most producers were already in touch with current prices and doubted whether mandatory price reporting would make any difference to the way they sell their cattle.

“They have got sometimes four to five grids in front of them when they ring you up, it (mandatory price reporting) won’t make a difference in my opinion.”

“You will never really have true information up to the minute every time, you will have best estimates, but even if you know all of that, what does it fix?

“It (full price disclosure) still doesn’t fix the core problem at 10c/kg does it?

“How do you regulate that?

The ACCC expects to complete it study and produce a final report in November.