Hidden away at the back of a business park on the outskirts of Toowoomba is a small company packing a big punch in the global agricultural technology market.

From its Toowoomba headquarters Farmscan Ag designs and manufacturers precision agriculture systems and devices that are now helping farmers in all corners of the globe to produce food more efficiently.

Precision agriculture is all about harnessing technology to help farmers produce more with less, and avoiding wastage of fuel, seed, fertiliser or spray by reducing tractor/spray-rig/aircraft run overlaps.

Australia is a recognised world leader in the development of precision agriculture technology, a status achieved largely through necessity: with no protection from trade barriers or subsidies, and large areas to farm and relatively few labour resources with which to farm them, Australian farmers have had to embrace technology in order to remain efficient and competitive against more protected farming competitors.

It is “pretty amazing” technology, as one of Farmscan Ag’s three directors and owners, John Chalmers, explained: “Think of a 400 horsepower tractor with wheels this high (reaching above his head) and two wheels either side this wide (hands outstretched), we can steer that within about 2-3cm of line at 12km an hour.

“One of the reasons we are in Brazil is that they’re doing sprayers, and they’re travelling at 30km an hour, with a 48 metre boom, all operated with no hands, and across contour banks.

“It even astounds us, it is amazing that you can have a system that is able to react that fast, no human can do it, it is physically impossible for a human to do that.”

Farmscan Ag began exporting in order to overcome the seasonal nature of its Australian-based business. About 50pc of its income was being generated in just three months of every year, a difficult scenario to manage from a staff, stocking and cashflow perspective.

So the directors took the approach that with two hemispheres on earth, it made sense to service farmer needs in a different hemisphere while their own was in a seasonal lull.

The company has recently opened its own office in the United Kingdom to service its growing list of northern hemisphere clients.

Farmscan Ag is also the only Australian company to display at Agritechnica in Germany, the world’s biggest international exhibition for ag machinery and equipment, attended each November by more than 500,000 people.

While there used to be several more, Farmscan Ag is now the only wholly Australian-owned company designing and developing comprehensive precision agriculture technology.

Taking on the multi-nationals

How can a relatively small company with only 15 staff compete so effectively on the global stage against big multi-national competitors?

What might be perceived as a weakness – its relatively small size as a company – is in fact a key strength.

Being small and agile means Farmscan Ag can respond quickly to customer requests for specifically tailored products or applications, and also to changing technology. Where much larger, multi-layered corporates may take years to convert a new idea into a commercially available product, and one that could even be obsolete by the time it is delivered to market, Farmscan Ag is able to react very quickly.

Its smaller size means it can also cater to smaller customers and batch sizes than bigger companies are often interested in, or able, to service.

“That is what being agile is about, we can make things happen for small to mid range groups fairly quickly,” Mr Chalmers said.

Another point of difference is that the equipment created by Farmscan Ag typically enables farmers to perform may applications with a single, integrated package. 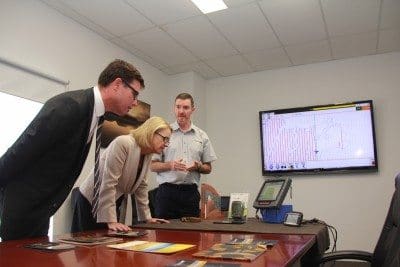 Farmscan Ag’s Toowoomba HQ was visited on Friday by minister for regional development and regional communications Fiona Nash and LNP candidate for the Federal Seat of Maranoa David Littleproud.

The Farmscan Ag directors said it was satisfying to see the Federal Government putting money into encouraging innovation in Australia, but they urged greater support for building export markets for tertiary exports like theirs.

New free trade agreements were fantastic, but they focused on exporting primary produce to foreign countries.

Farmscan Ag is effectively manufacturing and exporting tertiary farm technologies, and said more Government support would go a long way towards expanding these export market opportunities, in which Australia is a world leader.

Australia does not, for example, have a branded country-presence at the massive Agritechnica machinery expo held in Germany every year, as many other exporting countries do.

“If you can get equipment manufacturers together and they can get an Australian stand, we think the investment would pay for itself,” Farmscan Ag director and R&D manager Jason Stone said.

Another challenge for the business at present is the lack of access to broadband in their southern Toowoomba location.

They are currently relying on two ADSL lines because one is not adequate, and are in the process of spending $12,000 to establish a radio link with a nearby location in order to access faster and more reliable internet services.

Minister Nash said the scheduled roll-out of NBN broadband was underway, with the entire project due to be completed by 2020. A search of Farmscan Ag’s suburb on NBN’s scheduled rollout map online suggests groundworks for fixed line broadband connections in the area are underway, but the site offers no timeframe as to when access is likely.

Mr Stone said the Federal Government’s investment in improved wireless and satellite coverage for rural areas would be beneficial to users of Farmscan Ag’s technology, by allowing them to automatically synchronise data from their farming equipment with their office and their agronomist, which in turn will help them to make more informed decisions.

The expansion of 3G mobile coverage throughout farming areas in recent years has also streamlined the process of maintaining and repairing technology in the paddock.

“One of the most fantastic things we have been able to do in the last few years with enhanced 3G coverage is that we can log in (directly to a farmer’s Farmscan Ag unit) and provide support,” Mr Stone said.

“So you are not on the phone trying to fault find, we can log in, and where properties don’t have 3G but with better internet they can drive the tractor up to the homestead and connect with wifi.

“The broader the coverage gets (with the Sky Muster satellite and fixed wireless) the better that will be.”

In 2015 Farmscan Ag was a winner in the Queensland Premier’s Export Awards (in the Environmental Solutions category) and was a finalist in the 2015 national export awards.

In the early 1990s, Farmscan Ag director Jason Stone was a member of the University of Southern Queensland research team that pioneered on-farm robotics and fully automated equipment for agriculture.

He was also a member of the USQ’s School of Engineering research team that in 1993 developed the world’s first commercial vision guidance system, which allowed a tractor to be automatically steered using a camera.