End of an era, as AA Co veteran Henry Burke moves on

ONE of northern Australia’s most experienced and respected pastoral operations managers will transition to a new industry challenge next month.

Australian Agricultural Co’s Henry Burke has stepped back from the company after 37 years, to take up a senior operations management position with Consolidated Pastoral Co. Henry will become CPC’s general manager of Northern Territory and Western Australian operations, continuing to be based in Katherine. 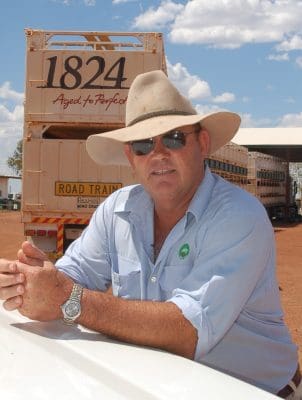 Henry Burke leaves AA Co next month, for a new role at CPC. Click on image for a larger view.

Winding-back on travel, and a desire to remain in Katherine rather than a ‘head-office-type’ role were guiding principles in his decision to move on from AA Co.

The transition to the new role will take place at the end of May.

The senior management position at CPC became available due to the upcoming departure of CPC’s current NT/WA region manager, Jock Warriner, who has resigned to take up a new role with Mark Menegazzo’s extensive Vanrook and Inkerman Stations in Queensland’s Gulf country.

While not quite as large as AA Co, the world’s largest beef producer, CPC manages a herd of about 360,000 cattle across 16 properties in three states, ranking it second in size in Australia, and probably the world.

CPC chief executive Troy Setter said in addition to responsibility for the company’s pastoral operations in the regions, Henry would also have involvement from the supply side with CPC’s Indonesian feedlot joint venture business.

“Henry has great depth of knowledge and experience in northern pastoral operations, and looking across the northern beef industry, a lot of today’s industry leaders in a variety of companies have worked under him when they were younger. He’s had an excellent track record in developing managers, and talent generally,” Mr Setter said.

AA Co managing director Jason Strong said Henry had made an immense contribution to AA Co’s operations over the past four decades, most recently as general manager of northern pastoral operations.

“There would be very few people working across the northern Australian beef industry that do not know him, or whose career has not been touched or impacted by Henry and Bernadette in some positive way,” Mr Strong said.

“He is an outstanding people manager, and has left an indelible impression on AA Co over the years, and will be greatly missed.”

Henry’s 37 years with AA Co in a variety of roles makes him the company’s longest-standing current employee. His wife Bernadette is not that far behind, having worked for the company in HR and accounting roles for 29 years. Bernadette, who has a wealth of experience supporting stations and developing people in Northern Australia, will also join CPC, working in the Human Resources/Workplace Health & Safety team.

Henry Burke’s career has spanned the entire spectrum of change witnessed in northern pastoral company operations over the past four decades, from minimally-managed cattle ‘harvesting’ to today’s much more intensively-managed businesses focused on productivity, and the dawn of the live export era.

His upcoming career move to CPC has allowed him to reflect briefly on changes he has seen in the northern industry, as his career with AA Co draws to a close.

To put his length of tenure at AA Co into some perspective, Henry has worked under five AA Co chief executives or managing directors – Trevor Schmidt/Kevin Servin, John Griffith, Don Mackay, David Farley and most recently, Jason Strong. Each brought their own unique skills-set to the role, he said, and left their own stamp on the business.

Henry started his career with AA Co in 1985, but broke his teeth in the pastoral company field working with CSR Pastoral, which owned a string of showcase pastoral properties across northern Australia before being dispersed in 1985.

He started at CSR’s Walhallow Station in the NT in 1980 as a nineteen-year-old head stockman, after starting as a ringer with Australian Estates, prior to being sold to CSR.

When parts of the CSR empire were bought by AA Co at the dispersal in August 1985, Henry came with the deal, as then assistant manager at Canobie, north of Cloncurry.

He progressed through management ranks, moving to Headingly, near Boulia in his first station management role, before moving again to Wondoola in the Gulf, replacing a young Ross Peatling, where he stayed for nine years. Another transfer to Wrotham Park at the base of the Peninsula followed, for four years, before moving to the Northern Territory as regional manager based at Brunette Downs in 2002, replacing Geoff Wagstaff.

Towards the end, Henry’s general management role covered all operations in Qld, NT and WA, encompassing about 430,000 cattle. He also contributed to industry affairs in a big way, spending ten years as a director on the NT Cattlemens Association, representing the Barkly branch. 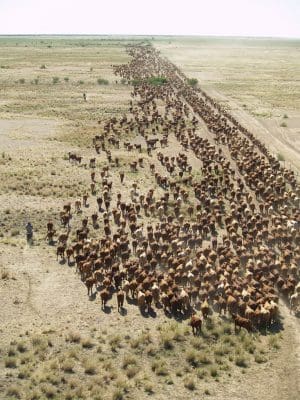 Moving a mob of cattle on Brunette Downs

Even during his 12-year term at Brunette Downs prior to shifting finally to Katherine in 2013, Henry saw massive changes in the way northern pastoral company operations were conducted.

It was during this period that AA Co transitioned out of its traditional Santa Gertrudis base into its new composite breeding program, and the modern ‘intensification’ process started, with provision of a lot more waters and subdivisional fencing for greater herd management.

Management shifted from one-round annual musters to greater segregation, and more sophisticated supplementation programs were all part of a major shift in the way pastoral company business was conducted. Monthly written reports gradually evolved into online data collection and utilisation.

Henry left Brunette in 2013, moving to a more central location in Katherine in his broader regional management role with AA Co. He will continue to operate from Katherine in his new position with CPC.

Despite the sweeping changes witnessed across the extensive northern Australian cattle areas over the past 37 years, Henry sees further potential for productivity improvement.

“Development in the region has not reached its natural limit, by a long way,” he said.

“There’s still a lot of scope for productivity gains in many areas, like branding percentages and kilos turned off. To improve that, we need further investment in waters, fencing and infrastructure to pick those percentages up further.”

“More intensification is inevitable in the north, if the industry wants to continue to lift calving percentages. You need infrastructure to graze country properly, and handle your cattle right.”

While there was still a lot of scope to do it, it cost a lot of money to execute, he said.

“The Beetaloo model, more fully utilising the pasture across the whole area, and stocking it accordingly is the next phase. Paddock size, pasture measurement and performance, breed type and managing the region’s nutritional gap are all important in lifting those key performance indicators.”

As an illustration of this, average breeding paddock size on Brunette Downs is still around 500sq km, despite the considerable development work that has already been carried out.

Henry said he was looking forward to his new role with CPC, particularly in mentoring station managers, and helping lift productivity in areas like improved calving rates.

He said he, personally, had extracted great satisfaction from mentoring younger staff, developing and fostering people as they rose through the AA Co ranks.

“A lot of the young people who have joined AA Co in junior roles have gone on to do good things in their careers, either through the pastoral companies network, or developing their own businesses. I’m proud of that, and it’s been a major part of what I’ve been about,” he said.

“Get the people side right, and the rest of the business tends to fall into place, and I’d give my wife, Bernadette, credit for playing a very important part in that process.”

Beef Central thanks Henry and Bernadette Burke for their generous hospitality provided at Brunette Downs during station visits over the years.