Drought still biting in more than half of Queensland

State agricultural industry development minister Mark Furner announced that Queensland is now 57 percent drought declared, down from more than 66pc, in March, with the drought-status revoked in eight local government areas and three part-shires, while two shires were added to the list. 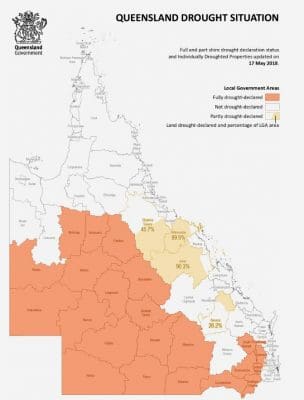 The Southern Downs and Lockyer Regional Council areas have been added to the drought declared list.

AgForce CEO Michael Guerin said the changes were based on the recommendations of Local Drought Committees taking into consideration their local conditions.

“The prolonged and severe drought has taken an enormous financial, environmental and emotional toll on farming families right throughout Queensland,” he said.

“Many western Queensland shires were first officially drought declared in early to mid-2013, so producers in those areas have effectively had six years with rainfall deficits.

“The summer rain provided hope and relief to some parts of regional Queensland, which we are seeing with today’s announcement, but many areas still missed out on the rain they desperately need. It’s important though that ongoing support, such as mental health services, are still provided to communities that have had their drought status revoked and are now entering the recovery phase.”

Primary producers in areas where drought declarations have been revoked can apply for an individual droughted property declaration if they still require assistance.

AgForce recently established the Queensland Emergency Drought Taskforce with 24 western Queensland Mayors and has written to federal and state politicians to outline a series of priorities to provide immediate relief to affected communities.

“The ongoing nature of this drought has overwhelmed even the best efforts of producers to prepare and while current government assistance measures are very welcome, they are really only designed for droughts that last two to three years,” Mr Guerin said.

“AgForce is seeking a commitment to ensure drought affected Queensland producers have both the immediate support they need as well as long term policy certainty to promote better planning and long-term risk management and recovery.”