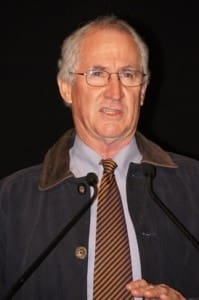 Mr Heatley, from Byrne Valley, near Home Hill, received a medal of the Order of Australia in the General Division (OAM) for service to primary industry

He  served the red meat industry with distinction, serving a lengthy term on Cattle Council of Australia as a Queensland Agforce/UGA representative, before being elected to the board of Meat & Livestock Australia in 1999. He spent 13 years on the MLA board, including the last seven as its chairman, after succeeding David Crombie.

Mr Heatley’s agri-political career spanned 33 years, commencing in 1978, when as a young cattleman he joined his local Home Hill branch the Central and Northern Graziers Association (now part of AgForce).

He was an advocate of the introduction of the Meat Standards Australia program and helped to guide the implementation of the National Livestock Identification System. His term as MLA chairman coincided with some of the industry’s most difficult days, including the 2011 Indonesian live export market closure sparked by animal cruelty claims.

He is also regarded as an industry innovator, pioneering the large scale production of the browse legume, leucaena in his region of Northern Australia.

Other recipients announced on Monday included:

Michael John Arnott, from Darling Point, NSW, has been named as a member in the General Division of the Order of Australia (AM) for significant service to the primary industry sector through executive roles, and to the community of Boorowa.

Mr Arnott’s past roles include vice-president, Royal Agricultural Society of New South Wales, 1995-2009; President, of the Boorowa Show Society for five years and member for 43 years, president of the Boorowa branch of the Cattleman’s Union of Australia in the 1970s and president of the National Party of New South Wales’s Boorowa Branch, for four years.

Long-time Brisbane Show steward Kenneth James (Ken) Crotty of Strathpine Qld, received a medal of the Order of Australia in the General Division (OAM) for service to the agricultural show movement in Queensland, and to the community.

Mr Crotty was also a meat competition judge, for many years and a long serving member of the Returned and Services League of Australia, 2007-2013 at local branch and State level.

Mr Crotty worked as a butcher for 17 years and was former meat and livestock inspector with the Department of Primary Industries and its succeeding departments in Roma, Ipswich and Brisbane.

Central western Queensland livestock producer and award winning stud Poll Merino breeder Walter Cecil Miller, Coreena, Barcaldine, received a medal of the Order of Australia in the General Division (OAM) for service to primary industry, to local government, and to the community.

Mr Miller has been the managing partner of Coreena Stud Sheep at Barcaldine, since 1980. Since that time Coreena won the Grand Champion Poll Ram at the Melbourne Sheep and Wool Show in 1995 and 2000, and Queensland Ram of the Year at the Queensland State Sheep Show on eight occasions between 1989 and 2000.

He severed as a committee member of Queensland Merino Stud Sheepbreeders’ Association from 1985-200 and 2003-2007, filling the role of president from 1995-1998, and was a Queensland delegate to the Australian Association of Stud Merino Breeders for six years.

He has judged Merino Stud Sheep at Brisbane, Adelaide and Perth Royal Shows, Wagin and numerous regional shows, was chairman of the Longreach Pastoral College from 1990 to 2003, and was a member of the member of the Ministerial Rural Industry Taskforce from 1996-1998.

Her achievements include having served as state president of the CWA from 2008-2011, and a range of local and regional level positions within the organisation.