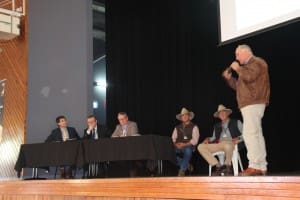 John Burnett leads the panel discussion at the AgForce 360 conference in Roma.

How can cattle producers improve profitability? Producing a differentiated, customer-focused product capable of attracting price-premiums, and forming cooperative partnerships with other producers were among ideas put forward at an AgForce forum in southern Queensland yesterday.

The question was posed during a panel session where agribusiness experts and cattle producers were challenged to find ways to help two hypothetical farming families navigate their way through heavy debt loads, dry seasons and depressed cattle prices to build sustainable businesses and to achieve desirable succession outcomes.

While much of the focus was on the comparatively high levels of debt many Queensland cattle operations are carrying relative to their current asset value and revenue earning capacity, attention also shifted to the underlying issues of profitability and what producers can do to improve their financial situation.

Most producers were already running their operations “close to the bone” after several tight years, meaning there was little realistic scope left to further cut costs in the current environment, Bentley’s Accountants managing director Ben Cameron told the audience.

Mr Cameron identified a lack of contestability or competition for cattle at the other end of the supply chain as a key challenge facing producers in their bid to improve profitability, and suggested that they consider forming modern style cooperatives and entering offtake agreements to strengthen their positions. However historically producers had shown little interest in working closely with other producers. 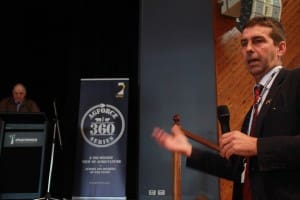 Many producers did all the work up to the point of sale but then failed to effectively market their product by simply booking cattle into a meat works without asking for a price as they had always done.

Mr Smith said he had recently received prices of 30-40c above the normal grid price through shopping around and selling cattle to an abattoir further afield than his nearest plant.

There were also significant premiums available on the current market through a range of production systems and market channels such as EU, organic, MSA and PCAS.

“That is where I urge people to do some of the heavy lifting themselves.”

Dulacca cattle producer Phillip Hughes said producers should identify who their customer is and then focus on giving them what they want.

Alliances with other producers should also be explored. 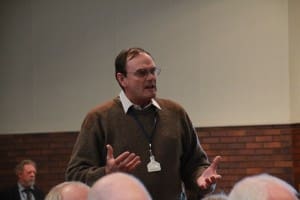 “Look at what you have got strategically, if you have too much debt and your property can’t generate enough cash then look at alliances with people, or joining up with someone else who has a big breeder place, you have to think right out of the square,” he told the forum.

Roma cattle producer Jock Douglas said one practical way that producers could differentiate their product in the market place was by “making an asset out of their sustainability”.

“The system we should be looking at is verifying our management, making an asset of that, and being able to take that through to the marketplace,” Mr Douglas said. 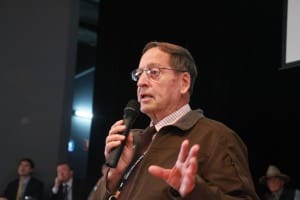 “Whether it is in the top market in Shanghai or Coles in Brisbane, that is where we’re going to get profitability in place in my view.”

Earlier, leading meat export industry identity Richard Rains said that the signs for future beef demand were looking wonderful, but producers should be working to create a point of difference that consumers and processors would demand and pay a premium to buy.

He said major beef customers such as McDonald’s were always looking ahead of the curve to satisfy consumer desires, and its drive to sell sustainably-produced beef should not be ignored.

The late Apple founder Steve Jobs had embodied the sentiment well with his comment that he invented products that the consumer did not know they required until they were available, and then they realised they could not do without.

“I believe that is where McDonald’s and others are with sustainability,” Mr Rains said.

“There is no point McDonald’s waiting until the people in the queue are demanding it.

“These are the messages McDonald’s are reading with their 70 million customers a day, they are getting the signals and they want to be ahead of the game. Good luck to them, and if we ignore that it will be at our absolute peril.”