Over the summer months David and his family have appeared in television, print, online and social media advertisements promoting McDonald’s homegrown food supply.

For a while there Australian Meat Industry Council CEO Patrick Hutchinson couldn’t leave his Melbourne office without seeing David’s face staring back at him from a billboard.

“My mug is bad enough in a mirror without having to see it on a billboard,” David empathised with the processing industry chief when Mr Hutchinson told him about his new view last year.

Mr Hill’s association with McDonald’s began a few years ago when the burger chain began discussing with Australian cattle industry leaders its intention to lead an industry-wide movement on beef sustainability.

Hear from David Hill, one of our beef farmers in Central Queensland, Australia to discover more about @maccas 100% beef. pic.twitter.com/lKedaH6fx3

Some in the grassfed industry expressed fear at the time that such moves by McDonald’s and other global beef customers could ultimately force Australian cattle producers to have to adopt prescriptive production rules and monitoring and reporting requirements.

‘It is better to be on the bus than under it’

“It is better to be on the bus than under it,” he said.

“There wouldn’t be a bigger customer of Australian beef globally than McDonald’s. They are there to promote beef, it is still their number one burger item.

“They want to expand their business in countries like China which will mean selling more beef.

Mr Hill said he was surprised to learn that the number one concern Australian consumers express about McDonald’s is that its burgers do not contain 100 percent beef, or 100pc Australian beef. “I can tell you they don’t add too much to a McDonald’s burger pattie,” he said “There’s no secret herbs and spices. It is just Australian beef, that’s it.”

One of the McDonald’s ‘homegrown’ advertisements featuring mustering scenes from the Hill family’s Clarkewood property at Clarke Creek.

When approached to appear in a McDonald’s advertising campaign last year, Mr Hill knew he’d cop plenty. Why would someone so keen on beef eating quality be associated with a fast food chain?

But he did it because he supports beef eating quality.

“I am only doing it because I believe in McDonald’s integrity,” he said.

“They reckon if a processing plant can pass a McDonald’s audit, it will pass any audit.

“About 15 percent of even the best carcases goes into trim.

“And a big thing for me was when we talked to McDonald’s about sustainability they talked about the three ‘E’s – environment, ethical but also economic.

“They want to expand their business and if they are going to do that, they will need more beef.

“There is no more land, if they want beef producers to be more productive, they know it will take a level of investment. They understand that if we are going to be investing in our businesses we need to have the confidence to do it, and a price and return at farm gate that is going to allow us to do that.

“They understand that their beef producers need to be profitable, and I started with them because of that.” 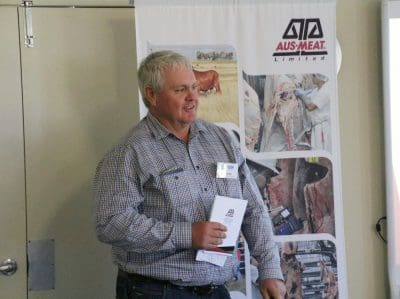 What the operation lacks in scale the family aims to make up for with the production of high eating quality beef and capturing premium returns.

From producing steers a few years ago that averaged well over 350kg carcase weight – “which aren’t really suited to the market any more,” David says – the operation now turns off steers averaging 300-320kg.

“We’ve been driven by the market, and the market wants a more moderate animal with better eating quality,” he said.

Of 220 steers sent to Borthwicks in one consignment, 218 graded EU.

Angus and Belmont Red bulls are joined to a Charolais/Santa cross breeding base, with the operation geared to turning off about 300 finished cattle a year.

Recovery from flood still a work in progress

However production is back on recent years after run of dry seasons was followed up by a devastating flood in the wake of Cyclone Debbie in March last year, from which the Hills are still working to recover.

They still don’t know exactly how much rain fell in the deluge because the surging floodwaters washed away their houseyard fence which held their rain gauge.

The floods also demolished sheds and cattle yards, and 30 kilometres of fencing.

One and a half metres of surging floodwaters washed through, and destroyed, their home.

Some of the family’s beloved horses were also lost in the floods, but fortunately all other animals on the property survived. Mr Hill said the floodwaters hit so suddenly and with such powerful devastation it was a miracle no family members were harmed.

The physical damage bill exceeded $700,000. The emotional cost can’t be so easily counted.

Close to a year later they are still in the process of rebuilding, this time on higher ground. Construction work on a new house was finally set to begin last week.

“The country stood up pretty up well. We try to keep a level of grass, so we didn’t have any erosion,” Mr Hill said.

“It is what it is… the country has recovered a hell of a lot better than we have.

“Once you have been through it you would never wish that on anyone.”

Despite the massive setback Mr Hill’s view is that there is always someone worse off. One producer at Monto he spoke to recently had been flooded three times in seven years. “You hear stories like that and you think to yourself, we’re pretty lucky really.”

He also feels for those in the west who are barely hanging on after five or six failed summers in succession.

“The processors say the cockies should be happy, they are getting twice as much money as what they used to.

“But you’ve got to remember, if you’ve only got half as many cattle as you used to have it doesn’t put you in any better position.

“Worse than that, some people don’t have any. I have real concerns for those people and whether they will ever get back in the industry.