The head of the Kimberley Pilbara Cattlemen’s Association says it is feared cattle losses may total tens of thousands of head as a result of record flooding in the remote Western Australian region. 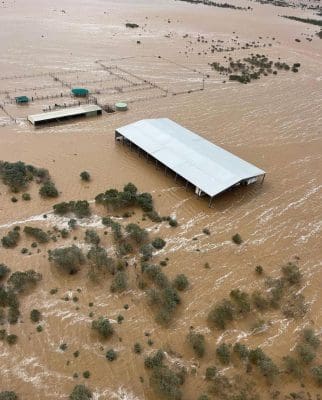 It will be months before full losses can be accurately assessed but KPCA CEO Mick Sheehy told Beef Central that from feedback from members suggests losses have been substantial, describing the situation as “pretty dire”.

The KPCA is playing an important communication role during the ongoing flood event, staying in close contact with affected producers and connecting them with emergency services where required and helicopter operators to coordinate fodder drops for stranded cattle.

Mr Sheehy said that in places the Fitzroy River is 40 kilometres wide and flowing rapidly.

The flooding has caused damage to homesteads and machinery, and potentially major stock losses.

“But we have been able to get up and about over the last few days and fodder drops are happening.

“We have got ADF helping out as well, where we can make large drops of fodder to a central point and then smaller helicopters are able to ferry fodder out from there.

“We’re fortunate a lot of the stations keep fodder on hand and the stations that are not affected by the flood have been very generous donating hay.”

Hard to prepare for

Mr Sheehy said a lot of properties have fenced portions of the river off over the years and routinely move cattle away from the river as part of normal wet season preparation, but this flood event is “just unprecedented”. 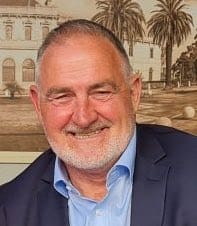 “It is at a record level at Fitzroy Crossing, you can’t prepare for that unprecedented flood which is what we’re experiencing at the moment.

“The water is moving quite quickly, so look we are expecting stock losses, I would say they could be in the tens of thousands of head

“It is hard to put an exact number on it just now, but substantial stock losses along through there.

“When the water is 30km, 40km wide and running quickly, stock just don’t get a chance.”

Many roads have completely washed out. As water subsides in some areas, some producers are describing three metre drops where roads previously existed, he said.

Efforts to assess the situation and relocate cattle to higher ground have been hampered by ongoing rain since Christmas Day.

In a statement Cattle Australia extended its support to those affected by the significant and ongoing flood event.

“More will be known once floodwaters recede but at this stage it is anticipated there may be substantial cattle losses and damage to station infrastructure,” the Cattle Australia statement said.

“Main transport routes have also been damaged and will require coordinated efforts to repair so the freight and logistics network connecting the east Kimberley to the port of Broome is open for the mustering season and communities are not isolated for extended periods.”

“Cattle Australia wishes to recognise the hardship and heartache the current flood and unseasonal rain events are having on Livestock producers and farmers across many parts of Australia.

“We thank those agencies at Federal and State Government level, the local volunteers such as the SES and local communities for their tireless efforts to assist those affected by natural disasters.

“Importantly Cattle Australia urges Government at all levels to continue support past the immediacy of these events to get critical and local infrastructure back into working order along with supporting the rebuilding of our regional communities.

“Cattle Australia stands ready to support our members and industry stakeholders and will work closely with state and federal bodies to help coordinate a comprehensive response.”

People unable to work in Western Australia and the Northern Territory due to the impacts of ex-Tropical Cyclone Ellie are now able to apply for short-term income support, the Federal Government announced today.

The Australian Government-funded Disaster Recovery Allowance has been activated for the local government areas of Victoria Daly in the Northern Territory and Broome, Derby West Kimberley, Halls Creek and Wyndham East Kimberley in Western Australia.

The taxable, fortnightly payment of up to 13 weeks assists eligible employees and sole traders who experience a loss of income as a direct result of a major disaster.

The easiest way for eligible people to claim is online through myGov, available 24 hours a day. For information on eligibility and how to apply, visit servicesaustralia.gov.au/disasterevents.

If people need additional support to claim, they can call the Australian Government Emergency Information Line on 180 22 66 from 8am to 5pm local time, Monday to Friday.

For information on the assistance available to Northern Territory and Western Australian communities impacted by ex-Tropical Cyclone Ellie, visit www.disasterassist.gov.au

Services Australia staff are well prepared to respond to disaster events. While there are already some staff on the ground, more are ready for deployment to affected communities as soon as it’s safe to do so.

For those with internet and impacted, we strongly encourage you to check your eligibility for a payment online at http://servicesaustralia.gov.au/disasterevents

The easiest way to claim is online. People without internet who can access a phone should call 180 22 66 between 8 am and 5 pm local time, Monday to Friday.

Services Australia staff will also be providing face to face service at the Evacuation Centre at Fitzroy Crossing.

I’ve spoken with Services Australia staff that are on the ground in Fitzroy Crossing and are working around the clock to get communities the supports they need.

I want to say thank you to all staff and give special mention to Zara (along with plenty of great people) who have been putting in 110%. ”

Minister for Emergency Management, Murray Watt: “We recognise the wide-ranging impacts these extreme weather events are having and the toll they’re taking on people whose homes and livelihoods have been disrupted.

We are standing shoulder to shoulder with every community impacted by these disasters, regardless of where in Australia the country they are.

We have put resources in place to keep a close eye on the ongoing impacts of these storms and floods, and to respond quickly and in partnership with the respective governments as needs are identified.”