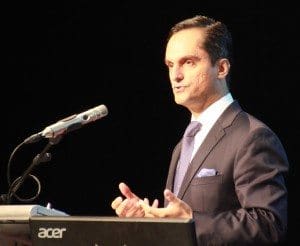 NAB’s Patrick Vizzone addresses the 2015 Ag in the Asian Century conference in Toowoomba.

The opportunity in the Asian Century is Australia’s to grasp, but the key challenge will be to source the capital needed to create the supply required to meet Asian demand.

That was a fundamental message delivered to the opening day of the Toowoomba and Surat Basin Enterprises’ Ag in the Asian Century conference from a range of high-level speakers with deep experience in Asia.

NAB’s Regional Head of Food & Agribusiness for Asia, Patrick Vizzone said Australian agriculture will need capital to help it to unleash the supply base required to capitalise on demand throughout the Asian region.

“There is a lot of Asian capital that is patient and it is aiming at Australia in order to equip local producers here with the capital required to create new supply and really unleash growth in their business,” Mr Vizzone said.

Mr Vizzone said Australian agricultural brands looking to do business in China should visit the market, do their research, take their time, and use an advisor that knows who the better partners are and who can help them to navigate the maze that is Asia and that is China. 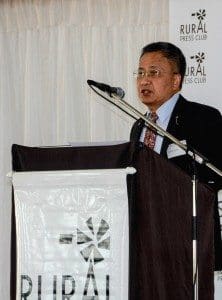 A similar message was delivered to the Rural Press Club breakfast preceding the conference by keynote speaker Alfred Chung, the executive director of China Agribusiness Limited, an elite meat sheep and cattle breeding operation in Australia and China, and a strategic advisor to Australian and Chinese agricultural business partners.

Mr Chung said the focus of the joint ventures was two pronged – to ensure Chinese investors received a good Return on Investment and Australian farmers also enjoyed “a big piece of the action”.

“We most sincerely invite our Aussie collaborators in teaming up with us shoulder to shoulder as equals in a long march to mutual prosperity,” Mr Chung said. “We are determined to keep the majority of the increased farm gate to dinner plate within Australia.”

However, undercapitlisation in the Australian farming sector was currently the missing link.

“Currently there is a dilemma or missing link in our industry and that is that most of our family owned businesses (in Australia) are undercapitalised to face the big opportunity, and many farmers and their families are experiencing financial cash flow difficulties.

“Some are facing bank eviction and family break ups. This is serious, I don’t want it to happen and we pray that it will not happen. All is mainly due to extended years of extreme drought.”

Mr Chung said the 30 year economic reform and openness in China driven by former leader Deng Xiaoping had produced millions and millions of multi-millionaires in the country.

Now that the businesses of construction, real estate and mining that helped them to make their fortunes were no longer the cash milking cows of the past, these multi-millionaires were not starting to channel their accumulated fortune into other investments, such as high level residential and commercial real estate in Australia and also agriculture.

The Ag in the Asian Century also heard numerous examples on Wednesday about the “phenomenal growth” of e-commerce opportunities between Australia and China.

NAB’s Patrick Vizzone said this trend would also be important in providing the price signals Australian primary producers need to confidently expand their supply base.

“The appeal with e-commerce is that a lot of these platforms are dealing directly with producers and with exporters rather than going through middle people if you like,” Mr VIzzone said.

“That means lower prices for consumers in China and it could potentially mean better returns back to the Australian farmer.
“I think those pricing signals don’t get telegraphed back to Australia, we’re not going to see a supply response.

“So we need to see higher prices here, that is why e-commerce is attractive, but we also have traditional bricks and mortar supermarkets which are growing trade at a phenomenal rate and we are working closely with to help them find new brands in Australia and new supply partners.

“You are going to see growth in both channels, and e-commerce is incredibly explosive.”

The Ag in the Asian Century conference continues at Toowoomba’s Empire Theatre today.