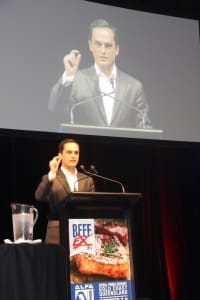 With 20 years of direct experience in China, NAB’s Patrick Vizzone is one Australian who can truly claim to have an in-depth understanding of the market.

Now the regional head of food and agribusiness for NAB based in Hong Kong, Mr Vizzone discussed what he sees as the key factors for success when dealing with China at last week’s BeefEx conference on the Gold Coast.

Here are just 10 tips from a comprehensive array of advice Mr Vizzone shared with the Australian feedlot industry representatives in attendance, many of whom are either already exporting branded, processed beef directly to China, or who have aspirations to.

1. China is not one market but many

There is a saying that when eating an elephant, you should take one bite at a time. The cliché provides a practical lesson for anyone looking to do business in or with China, Mr Vizzone said.

China was not one market but a matrix of many, each with significant scale. Just some examples: Beijing alone has the GDP of the Philippines while Guangdong has the GDP of Indonesia. Every 90 days the incremental growth in China as a whole creates the economy of Vietnam.

Exporters needed a regional strategy that was completely in line with Government policy and government interest.

“But China is the elephant. China cannot be conquered in one fell swoop. You really need a provincial rather than a national strategy.”

Consumption patterns differ greatly across all of China. Finding the right market is not just about GDP and income levels, but also about understanding local preferences.

For example Guangxi ranks 27th in terms of provincial GDP out of 31 provinces in China, but has the third highest meat consumption per capita in China.

It was also important to understand that despite the fantastic export volumes we have seen out of Australia, consumers in the mass market are still quite price sensitive.

However there remains in China a small niche in relative terms, but massive in absolute terms, that can afford high and ultra premium type products.

While China’s east coast has been the focus of the country’s economic transformation, it is the second and third tier cities that are now driving growth.

Chonging, for example, is an inland city of more than 30 million people which is growing at 16pc a year.

“These areas really offer enticing opportunities as opposed to the larger first tier cities where it is really hyper competitive,” Mr Vizzone said.

A Chinese proverb states that ‘you won’t help the new plants to grow by pulling them up higher’. This means you need to be patient and let things run their course.

“The Chinese have an abundance of patience, their regular five year planning underscores that,” Mr Vizzone said.

“The key to succeeding in China, whether it is in banking or in agribusiness, is patience.

“A key mistake we see time and time again is someone getting off a plane and rushing to do a deal, or meeting a delegation from China and rushing to get that deal done rather than following a well thought out strategic plan.”

5. A strategic partner is essential in a complex market

The Chinese business environment is very complex and getting more so.  Last year the World Bank’s ‘Cost of Doing Business Index’ ranked China at 96th out of 189 countries.

In China the Government not only sets the rules but also owns the majority of businesses. Of China’s top 500 companies, 60pc are State Owned Enterprises (SOEs). They represent the overwhelming majority of commerce, with a combined revenue of US$2 trillion per year.

The dominance of SOEs means that by nature the business environment in China is more bureaucratic.  SOEs are also generally quite conservative and have a high degree of uncertainty avoidance, meaning the downside of making a mistake greatly outweighs the upside of getting it right.

“That is why you get a lot of questions when you deal with these enterprises,” Mr Vizzone said.

“Now whether it is trading or investment, you need to be adept at dealing with these companies, with SOEs and with larger privately owned companies.

“And this is challenging for SME businesses and even for large businesses in Australia and in the west.

“This is why you need a good strategic partner who understands how the market works.”

Organisations that are charged with sourcing key food imports in China can’t simply pick up the phone and place an order – the quantities in which they deal are just too large.

Mr Vizzone’s advice to exporters (which paralleled similar advice given by Chinese market expert David Thomas in the preceding speech) was to form alliances, cooperatives or partnerships to create the scale required to able to deal with these companies.

“There will be enough to go around for everyone, and then some.”

7. Know your customer, deal with the top

It is also very important to know who you are dealing with in China, Mr Vizzone said.

“You need to know you can trust that person, because you won’t have the same avenues of recourse if something goes wrong.

“Selling product to China is easy, getting paid is sometimes much more difficult, but you need to know who you are dealing with.

“Decision making is always at the top, so my advice is deal with the top guy whenever possible and that will save you a lot of heartache.”

8. Austerity is the ‘new normal’ in China

China’s key domestic goal under its current five year plan is to grow the domestic economy fast enough to keep everyone happy, while trying to wean it off an over-dependence on property and infrastructure spending.

As a result, austerity has become the new normal across the consumer spectrum, Mr Vizzone said.

“I have lived in China for about 20 years, this really feels different to anything else I have experienced before.

“So with this austerity you really need to think where do I want to focus my business.”

Austerity did not mean growth would not continue: “The mass market will continue being a value play for the middle class, and there is clearly a high end niche, a niche that is very small in relative terms and very large in absolute terms.”

“Food safety is the number one consumer issue in China,” Mr Vizzone said.

“There is no bigger consumer issue in China, and Australia’s clean and green image provides a massive comparative advantage.

China produces half the world’s pork, and buys two-thirds of the world’s globally traded soybeans to feed its domestic pigs.

The billion dollar question now, as China looks to ensure it has sufficient food available to keep its people well fed and happy, is whether it will continue to increase feed imports, or will allow greater imports of finished product.

The answer, which will have a huge impact on Australian agriculture, is already crystal clear, Mr Vizzone believes.

“China’s leadership is fine tuning the concept of self-sufficiency, and the result will be a more pragmatic and sustainable footing that increasingly leverages the benefits of trade.

“Witness in this respect the upcoming FTA that Australia is about to sign with China.

“So landmark deals like Shuanghui International’s acquisition of Springfield Foods, the US’s largest pork producer and processor, are not about technology transfer. It is not about the warm, fuzzy stuff, it is about getting access to America’s plentiful and safe supply.

“It is the same dynamic with beef here in Australia. This will have a massive impact on your business because small shifts towards greater reliance on imports have sizeable impacts in global markets.

“Consider that China produces 55 million metric tonnes of pork, second place is the US with 10 million tonnes, if China was to substitute just 2pc domestic consumption for US product, that would be 11pc of the US market, and that could almost happen overnight.

“As China continues to swap pork for beef, these ripples emanating from China will look like a  tsunami once they get to Australia, because China’s total demand is so vast.

“The key to success is you want to deal in China is once again positioning your business for this trend which once again I don’t see abating any time soon.”