‘Team Australia’: Exporters urged to work together to tackle China 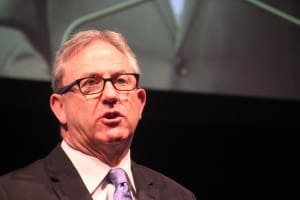 Australian beef industry stakeholders eyeing the Chinese market should collaborate and work together under a “Brand Australia” approach, an international market expert told BeefEx on Thursday.

David Thomas from Think Global Consulting is officially described as a “futurist”, but in practice he works closely with Chinese entrepreneurs and business leaders helping them to do deals both with and within Australia.

China’s high concern for food safety meant Australia was well positioned to supply premium quality product to the market, but first it had to get better at promoting “Australia’s brand”.

Mr Thomas advised Australian companies exporting to China to cooperate rather than compete to satisfy the country’s vast demand, and to operate under a single and clear “Made in Australia’ brand.

(While his address did not touch on this development, Meat & Livestock Australia has recently reinvigorated the ‘brand Australia’ approach for meat marketing via its True Aussie Beef and True Aussie Lamb brands)

Mr Thomas conceded that calling for commercial players to join forces instead of treading their own path always met resistance.

However, at this stage of the market’s development, “Brand Australia” was the only brand many Chinese consumers cared about.

“When the Chinese look at an Australian product, they don’t actually care what the brand is,” he said.

“They don’t care who made it, what colour it is or what kind of special nature you have around your product, they care about only one thing: Does it come from Australia?”

As the market became more sophisticated, then exporters may be able to compete on a brand and develop their own value proposition, Mr Thomas said.

“But for now it is all about team Australia, and I think we have to just give in to that for now and be consistent around branding and deliver that safe, quality, tasty message that we need to get recognised in China.”

In recent years Mr Thomas has helped Australian citrus growers to expand their exports into China.

Initially, he said, the each producer had aimed to compete against each other in the market. They said their grandfathers “would turn in the grave” if they ever used the ‘Made in Australia’ sticker, he said.

However they began to realise that demand in the market was so great that they could only satisfy Chinese customers by working together and selling under a single Australian-brand.

“Some people see it as diminishing the value of an independent brand.”

In response Mr Thomas said he believed there may be a case for an exporter to build their individual brand with the people who are placing the orders, such as importers and wholesalers.

“But on the shop floor, when it comes to the consumer looking at the shelf, that is where the ‘Made in Australia’ brand has to be.

“And I have seen many examples of where it doesn’t exist.”