THERE will ‘absolutely’ be opportunities for the extensive northern pastoral industry to get on board in the carbon space – but reliable tools to measure and monitor carbon in this environment needed to be developed and perfected first.

That was the message from Australian Agricultural Co managing director Hugh Killen during a Q&A session held as part of an analyst and investor briefing this morning, following the release of the company’s 2021-22 full year financials. 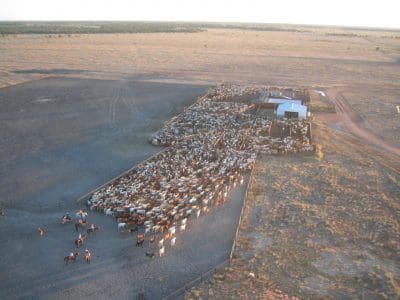 Cattle mustering on AA Co’s Canobie Station in the Gulf.

Carbon was a popular topic for scrutiny by analysts and investors in this morning’s briefing – along with AA Co’s meat sales performance, beef processing models and the perennial questions about the likelihood of shareholder dividends this year.

Private investor Charlie Kingston posed a series of questions about carbon opportunities for AA Co, given its vast landholdings across northern Australia.

“There’s plenty of attention being focused on carbon farming and rotational grazing, etc. How big of an opportunity is carbon for AA Co?” he asked.

Managing director Hugh Killen said in terms of carbon and more broadly, natural capital, it was a key plank within the company’s sustainability strategy.

“I think there is a very significant opportunity in the future for AA Co, and more broadly the big landholders across northern Australia, with soil carbon,” he said.

“But we need to get the technology and the science right to be able to benchmark that properly first.”

“In terms of our own business, this is not just soil carbon, but landscape carbon. We have a project in flight right now to (monitor and measure) that, working with a number of partners to deliver.

“But there will be material (financial) opportunity in natural capital as well, and we are really looking forward to talking to the market about that in July, when we update AA Co’s Sustainability Strategy,” Mr Killen said.

“The interesting thing for businesses such as ours is that the opportunity is much broader than just soil carbon – it embraces landscape carbon and the value of ‘natural capital’ across our estate, as well.”

“In the future for AA Co, it won’t just be producing beef protein, but other opportunities that arise from the natural estate as well.”

“The simple answer to that is yes,” Mr Killen said. “The Packhorse model is interesting, and it works well in the production environment that company operates in. But AA Co’s scale is a lot larger, and operating in different environments.

“We are already investing in infrastructure to be able to intensify, and our version of rotational grazing, given our scale, is a lot larger. We believe that will give us better carbon opportunities into the future, as we register those projects and get them through,” he said.

But the big challenge in the extensive northern production systems was in getting the right science and benchmarking in place to measure soil carbon.

“This is ultimately why we did not put a target into our new sustainability framework on day-one. That will happen in the next couple of years,” Mr Killen said.

“There will absolutely be an opportunity for the northern pastoral industry in carbon, but going forward it needs to be fit-for-purpose in the rangelands northern environment in which we operate. That’s why we prefer to refer to landscape carbon, not just soil carbon – the whole feed biomass.”

“That whole enteric methane cycle is part of our initiative that AA Co will be delivering on in the next two years. From that, it opens up the opportunity to register those projects, and create another revenue stream for businesses like ours.”

An analyst from brokers CLSF asked why gross beef sales had only modestly improved last year, given that the company’s average price per kilo for beef sold had risen 21pc.

Wagyu meat sales volume was down 14pc last year, off the back of historic low calving numbers over the previous couple of years, in line with the drought and flood events, he was told.

“This is well in line with the Australian industry herd reduction,” Mr Killen said.

“More importantly from an AA Co perspective, our kilograms produced this year so far are up 28pc, and our herd has grown by 42,000 head. As we move into financial year 2023 and beyond, that will stand us in good stead to deliver further revenue going forward.”

“Mecardo’s overall Australian beef price index is up around 12pc for the year, so 21pc from AA Co (85pc of which is now branded Wagyu) is pretty good,” he said.

“It really underlines our focus on brands and premiumisation in those markets that our product goes into.”

“I also think in the commodity beef market, those shorter-fed 100-day type cattle margins are very, very tight at the moment, given input prices and feeder cattle prices (click here to see Beef Central’s report on this topic published yesterday).

Will shareholders see a dividend?

Private investor Charlie Kingston asked whether, given skyrocketing prices for pastoral land, AA Co should be delivering a dividend to shareholders this year, breaking a decade-long drought, or selling off some land to capitalise on the buoyant conditions.

“As we said in our briefing remarks, we want to continue to invest back into the business,” Mr Killen told him.

“It’s one of the reasons why we have seen very good uplift in terms of the valuation of our properties this year.

“You’re right, though, in that it is a really good time to be in agriculture at the moment. The work we have done to make the company significantly more efficient and simpler, and having the right tools at our disposal to make the right decisions, will place us in a strong position, when seasonal conditions change again (for the worse) in the future.”

Mr Killen said the dividend question was one for the board, and the chairman would update shareholders at the upcoming AA Co annual general meeting.

“The NTA (net tangible assets) is going up – but that’s certainly not exclusive to AA Co. The company’s shares have chronically traded at a discount to NTA for years. Is there a prospect for a potential buy-back to close that inherent discount?” Mr Kingston asked.

Mr Killen said that operationally, his focus at the moment was on making sure the company had the right capital to invest back into the business.

“That’s showing good results over time. The share price over the last two years has reflected that. But we have more work to do – in continuing to improve those assets.”

Ultimately share buy-backs were a topic for the board to address, he said.

“It’s probably a great question for the AGM.”

Another webinar participant asked for the cost breakdown in putting meat onto the plate, ranging from livestock production phase to transport, lotfeeding, processing, marketing and value-adding.

He also asked about opportunities for ‘local’ processing, to ‘reduce stress on cattle.’ Beef Central took this to mean a Provenir-type concept, where mobile abattoirs move from site to site, killing cattle on-farm.

AA Co’s chief financial officer, Nigel Simonsz, responded to the cost of production question, saying broadly, for Wagyu, the cost of feeding the animal represented the greatest component of cost in the product – roughly 40pc of overall production cost. Other parts of the supply chain (breeding, growing, processing, etc) effectively shared the remainder.

In terms of ‘local’ processing, Mr Killen said all cattle moved through the company supply chain from northern breeding properties to growing to feedlots, in Central and southern Queensland – gradually moving closer to processing facilities through their life-cycle.

“Feeding at Dalby or Comet in Central Queensland, we have a relatively well-managed lift into our processing partners. Animal welfare is a key consideration in doing that,” he said.