IAN McConnell brings a unique perspective to the question of what the beef industry can do to maintain consumer trust as anti-meat headlines and campaigns work to erode it.

His ties to the beef industry are strong – his family has owned and run the historic Mt Brisbane property near Esk for more a century, Ian studied animal science at UQ Gatton and then meat science at Colorado State University, and worked as a DPI livestock extension officer for almost a decade, during which time he was named both Australian Rural Youth Ambassador and Cattle Council of Australia’s Beef Industry Rising Champion.

In 2012 Ian joined the World Wildlife Fund For Nature Australia to lead the environmental organisation’s engagement with the Australian beef industry, before being promoted to WWF’s global beef industry lead in 2014.

It is no secret that there are mixed views about the WWF in Australia’s cattle industry. Some groups are adamant the industry must engage with groups such as the WWF to ensure it understands and is staying ahead of changing consumer expectations. Others, particularly in Queensland where the WWF’s past active role in lobbying for stringent vegetation management controls on landholders has never been forgotten, strenuously oppose any suggestion of industry engagement with groups such as the WWF, warning they will lead only to prescriptive rules controlled by such groups imposed on landholders in the future.

Few people bring the same depth of understanding to both sides of the beef industry “social licence” debate than Ian, through both his extensive beef industry background and experience, and his work with the environmental NGO globally.

At an intensive agriculture conference organised by the Toowoomba Surat Basin Enterprise and Food Leaders Australia at Dalby yesterday, Ian shared his views on the challenges the beef industry is facing and his thoughts on what it needs to do to maintain consumer trust in future. 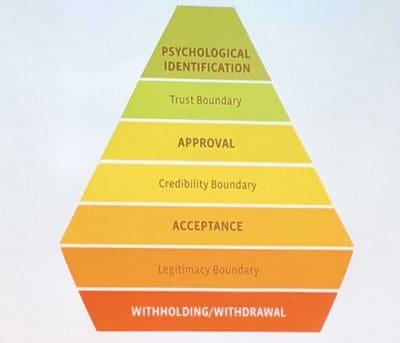 Stages of social licence – Click on image to enlarge

Social license as an idea was originally borne out of the fracking industries in the United States, he explained.

When it began, the fracking industry enjoyed high levels of approval because it employed many people in rural America and brought many communities out of poverty.

However, over time, the challenges it posed to watersheds in the landscape eroded its levels of public trust. As it crossed the trust boundary the industry still had regulatory approval to operate, but was no longer what the community idolised or identified with.

Over time, as the industry lost its social acceptance, communities have withdrawn from allowing it. The same trend has occurred here, with a number of local councils and states in Australia banning the industry from operating.

So how does this apply to beef?

In a message that may come as a surprise to beef producers, given the tone of anti-meat headlines and commentary on social media, is that in Ian’s view the industry still enjoys strong levels of approval.

“Any belief from you as an industry that falls below that line is pure pessimism,” he said

“All up, I will challenge you, it is purely you listening to your own Facebook feed

“It is why we tend to over exaggerate the impact.”

Farming is still one of the most trusted professions in the world, second only to careers that save lives, such as paramedics and emergency services.

“Farmers are still intrinsic to who we are, especially in Australia.”

“It is becoming a little bit more removed in different parts of the world, in Europe you’re seeing meat consumption decline because of this difference (The difference between Australia’s social identification with farming and that not being the case in Europe).”

However, nor was there any room for complacency. The rise of social licence as a concept had emerged for genuine reasons of resource scarcity and declining biodiversity.

The world was going to have to provide more with less, and would need to ‘sustainably intensify’, to feed growing city-based populations.

“We are going to have to produce enough food in the next 30 years to match all of the food humanity has ever eaten, since first man walked, in that time,” he said.

“It is a really big challenge. How we do that, in light of a number of resource scarcities, but also the fact the very natural systems on which we rely to provide primary production, are also declining.

As consumers move to asking more questions about how their food is produced, some countries are looking to seize upon that opportunity. Ireland for example has said that 100 percent of its exports will be certified sustainable by 2020.

“They have told the world we are going to be your market place for sustainable food.

“The question I have for you is, is their  food any more sustainable than Australia’s?”

Social licence is about risk

A central message was that social license to operate is not about marketing, but about risk.

Social license is your right to operate, and is directly related to regulation and consumer acceptance.

Risks only arose when someone was doing something bad, and the biggest and most important role the farming industry could play was to eliminate that risk.

“If there are bad things happening in your industry, be assured they will get out.

“If you’re seeing them on your farms, if you’re doing something you don’t want someone else to see, then I suggest stopping it because right now the chances of them seeing it pretty soon are going up.

“That is a new reality we have to live with.”

‘You need to live what you say you are doing’

For people within intensive agriculture it came down to ensuring a culture exists where it is okay for workers to take a bit more time to get practices right and to keep animals calm.

It was not enough to simply tell your story – you always need to live what you say you are doing.

“If you think that just telling people what you do today is the same as what you have been doing for years is going to win them over, I think you’re mistaken,” he said.

“In Australia because we live in a world of food abundance, we have to expect our consumers want you to be better than they are.

Ensure consumers are able to get answers to the questions

It was also important to ensure that if a consumer asks a question, they will be able to get an answer, and when something bad happens, to explain to consumers what they are seeing.

In one recent example images of dead aborted calves allegedly taken in a feedlot were widely shared on social media by a former employee of the operation.

“One thing I still don’t know and I have never seen an explanation is why am I looking at those photos,” he said.

“So I need that clarification. The answers are there, we just haven’t seen them yet.”

Asked to elaborate further on what he believed would have been an appropriate response by the feedlot and/or the broader industry, he noted that the incident itself, despite being shared by animal activists on social media, received no attention from mainstream media.

However, had it been reported to a wide urban audience, it would have been critical for the industry to explain what people saw.

“Because the response currently was, ‘we are a world leading feedlot and mortality rates are low, we’re doing a good job’, which leads me (as a consumer) to think those photos are what occurs in the best feedlots.

“Am I happy with that? Those weren’t great photos, but any of us who work with livestock know you get far worse photos looking at animals in the wild.

“It would be good to have verification of those and potentially have that stored because these things, because of the world we live in, have the ability to re-resurrect themselves.”

Poor welfare hard to ever justify 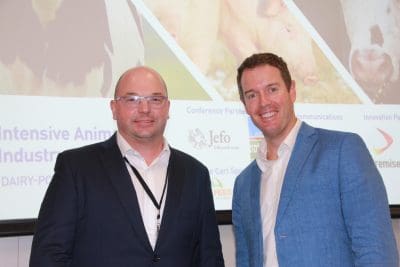 Asked the same question at the conference, SunPork Group managing director and CEO Professor Robert van Barneveld said the key point was to avoid bad practice in the first place, as it was very hard to ever justify a poor welfare situation.

However he also added that he felt the level of sensationalism and publicity stunts animal activists had employed was getting to the point where they were actually causing themselves and their own cause harm.

Mr McConnell said it was important to remember that trust can be eroded very quickly, as ongoing issues with the live export industry have shown.

“You have to live the truth all the time before you can get the trust.

“You can’t rely on it, it is not something you will get and then you can put away, you have to live it over time.

“I am also proud to say that WWF through a number of initiatives through a number of commodities plays a really exciting role in working with farmers, we work with farmers in round tables now in nine countries, and we support the work of groups like the Australian beef sustainability framework, in trying to define what are these attributes, how do we measure them and how do we communicate them to consumers.

“One of the things we can do is lend trust to claims when they’re robust and credible and we try and do that where we can, and where there is an actual impact we need to work on.”