JUDGING is now well underway for the Beef 2021 ANZ National Beef Carcase Competition, which will come to a climax at next May’s triennial beef expo in Rockhampton.

By the end of December, some 455 carcases will have been judged at processing plants across Queensland, NSW, South Australia, Tasmania and Western Australia, since assessments started back in June.

No judging has yet taken place in Victoria due to COVID lockdowns and plant closures, but assessment of entries in that state is expected to start early in the new year (see upcoming competition processing dates list below).

While matching Beef 2018’s record carcase competition entries of 1041 head might be beyond reach by next May, competition organisers are confident numbers will grow substantially by the time last carcase judging takes place at the end of March.

Seasonal conditions in parts of Queensland, and this year’s challenges around COVID have meant numbers are down a little at this stage on the 2018 event, but there is still plenty of time for entries and judging during January-March next year.

The cancellation of many regional carcase competitions this year due to COVID control measures has restricted the number of ‘dual-entry’ cattle this year, where cattle are judged simultaneously for both their local carcase comps and for Beef 2021.

Given dry conditions across large parts of Queensland over the past three months – together with some Central Queensland producers electing to push finished cattle into heavy live export markets for Vietnam rather than processing – it is anticipated that grassfed entries will be a little lower in next year’s competition than three years ago.

For the first time in the beef industry, camera-based grading is being used to judge all entries in the Beef 2021 Carcase Competition.

At the suggestion of chairman Bryce Camm, Beef 2021 has purchased four of the new Samsung smartphone-based MasterBeef grading cameras for use in the competition. Click here to view an earlier Beef Central story on the SmartBeef grading technology, developed by Central Queensland Wagyu cattleman and engineer, Darren Hamblin. 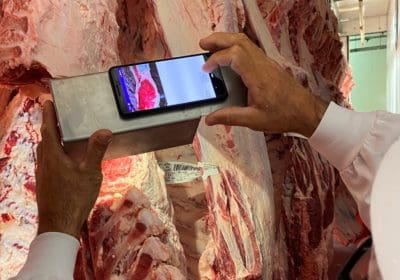 The MasterBeef Samsung smartphone based digital camera grading technology, and below, a digital image of marbling assessment using the camera. Click on image for a larger view

The portable, lightweight and easy-to-use chiller assessment grading cameras are being used to capture images of all entries, in conjunction with the plant MSA graders at each processing facility.

One of the four cameras is despatched to each processing site for use during the judging period, with individual carcase data and digital images captured and stored on the MasterBeef system database. MasterBeef has donated the use of the software. At the completion of each judging round, the cameras are returned to the Beef 2021 committee for re-distribution for the next judging round.

Master judge Janine Lau then reviews the digital data and images collected at each site, as well as slaughter-floor data, to ensure consistency in grading across all sites. 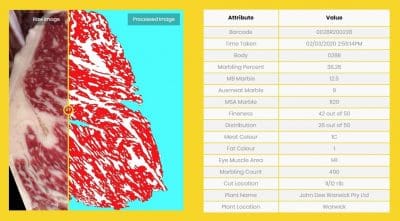 flexible at each plant, without the need for a master judge to physically travel to each of the 22 participating plants multiple times throughout the six-month judging period.

It is likely that the cameras will be loaned to the Inter-Collegiate Meat Judging organisation after next year’s competition judging is completed.

The appraisal system utilised in the competition was specifically designed to meet both export and domestic market requirements and employs the latest technology available to the beef industry, organisers said. This will allow the competition to proceed without impacting plant operations and biosecurity.

Carcase committee chairman David Hill said entries were now starting to flow in from across Australia, after a relatively slow start.

“Given that the Beef 2021 event only got the official green light to go ahead a fortnight ago, after considerable uncertainty due to COVID, it’s not surprising that early entries have been a little slower. But the good news is there is still plenty of time for judging, right across Australia, from January to March,” Mr Hill said.

He said the new MasterBeef cameras had proven to be a great advance in judging, especially during this year’s challenging circumstances.

The committee is looking at the possibility of showcasing the MasterBeef grading camera, and the science and IT smarts that drive it, during a session in the Beef 2021 Tech Yards during next May’s event – the beef expo’s gathering point for all things agtech.

Beef producers from around Australia have a unique opportunity to benchmark their product on a national level by entering cattle for the 2021 ANZ National Beef Carcase Competition.

Seven classes are open for competition – three each for grassfed and grainfed entries, and a seventh for unrestricted feeding. Both grassfed and grainfed divisions include lightweight and medium weight domestic trade classes for steers or heifers, and a heavy export steer class. (click here for details).

Winners will be announced at a Beef 2021 awards dinner on the night of Tuesday 4 May next year.

To align with peak turnoff periods in each region, entrants have an opportunity to have their cattle entries delivered over a ten-month competition phase. Entrants can deliver their cattle on nominated slaughter dates to their participating processor from now until 31 March, 2021.

Twenty two beef processing plants will act as competition venues for next year’s competition. They include 11 in Queensland, five in NSW, two each in Tasmania and Western Australia, and one each in Victoria and South Australia.

Click here for details of your nearest participating processor.

Some upcoming processing dates and locations for competition entries: