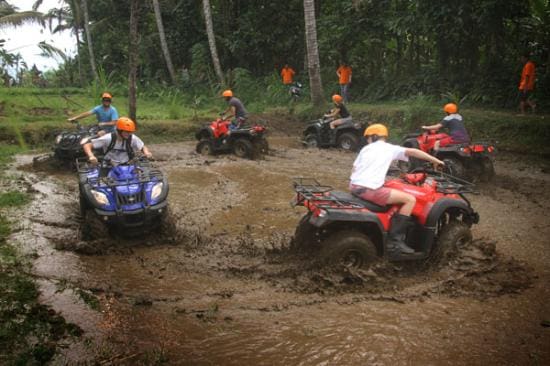 There is plenty of muddy options for tourists in Bali. Photo: Tripadvisor

AN EMOTIONAL response has followed the news of the devastating Foot and Mouth disease hitting the tourist hotspot of Bali – with many warning there is a significant risk it could be brought into Australia.

Agriculture minister Murray Watt has this week headed to Jakarta to hold face-to-face talks with his Indonesian counterparts, he will be accompanied by National Farmers’ Federation president Fiona Simson and chief vet Dr Mark Schipp. Last week, the minister announced a series of measures to stop it coming through the Australian border.

A combination of Bali being a tourist hotspot and Balinese cattle being quiet and accessible for tourists to take photos has put many on edge about Australians transporting the virus home. (Click here for more that)

Plenty of campaigns from the agricultural industry have followed the news, with some calling for a ban on Bali travel and others telling tourists to buy their shoes in Bali and throw them away before they leave.

In response, Beef Central has been talking to travellers in several Facebook forums to see what their experience has been with managing the disease and how they were greeted by Australian authorities when they arrived home. The questions yielded three main responses.

A post on one tourist forum created plenty of discussion from tourists who had been on a quad bike tour in a rural area of Bali. Most of them left with clothes covered in mud and were wondering what to do with them. The post was taken down by moderators for an unknown reason.

One of the tourists was Jane Prichard from Northern NSW, who had been on a quad bike tour and subsequently declared all her family’s clothes when they arrived back in Brisbane at the weekend.

She said her family were from a vegetable farming background and took the threat seriously, but there were mixed attitudes about FMD on the plane.

“There were definitely people on our flight that were not taking it too seriously, because the messaging from border force took some time to deliver at the end of our flight and people just wanted to disembark,” Ms Prichard said.

“They read out the warnings before we left Bali and boarded the plane when we arrived in Australia – they wouldn’t let anyone stand while they were doing that. There was also some mist sprayed onto plane at the cabin doors but I am not sure what that was for.”

Within the Bali tourism industry, Ms Prichard said there was not too much talk about FMD.

“They’re all about recouping lost income after their tourism industry has been largely decimated in the pandemic, they haven’t had tourists for more than two years and they can’t get you on these tours quick enough,” she said.

“The first I heard of it was from someone sending me a link to a news article while I was over there telling me to be extra careful when travelling home.  We also have some friends who are livestock producers, who called us because they were worried about the disease spreading to Australia.

“There was a pig farm beside our accommodation, the our hotel staff were telling us it was an Airbnb and you could stay there – which was pretty concerning.”

Since the incursion of FMD in Bali several businesses have been incentivising tourists to throw their shoes away before they board the plane home. Toowoomba-based Chase & Hide started the trend earlier this week offering a $20 gift voucher on its Facebook page to tourists with photo proof of them putting shoes in the bin.

National Farmers’ Federation president Fiona Simson said buying a new pair of shoes while on holiday was an act of national service.

“Foot and Mouth Disease loves to hitchhike on shoes. That means your dirty old holiday pluggers could be the thing that brings this disaster to our shores. Don’t risk it!” Ms Simson said.

“Throw out those tired old thongs. Bin them at the airport or your hotel and post proof on social media, and we’ll help you buy a shiny new pair. It’s that simple.”

Tag us in a post binning your holiday pluggers and we’ll send you a 30% discount code, courtesy of our mates at @RingersWestern. pic.twitter.com/TrGdKaaglg

Ms Simson said if tourists were not prepared to throw away their shoes, they really needed to clean them.

“Before you pack your bag to come home, take the time to give your shoes a good clean – paying particular attention to any mud that might be caught in the tread,” she said.

“Taking that minute to clean your shoes could prevent a serious disaster back in Australia. Clean shoes are just a bonus.

“Most importantly, don’t head straight back to a farm when you get off the plane – we need to keep our country safe.”