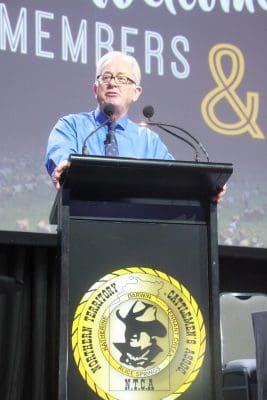 Andrew Robb speaking at the 2017 NTCA conference in Darwin.

FORMER federal trade minister Andrew Robb has urged businesses in northern Australia to take the fight for foreign investment to the Government.

At every stage of development since European settlement, Australia has never had enough people with enough money to capitalise on the opportunities.

Foreign investment had built the country, and was needed today as much as ever.

“You need to have this fight with the Government.

“You need to make sure people are not blind to the benefits we have achieved over 200 years, from capital from many countries.

“They can’t take the farms away. I have never seen in my lifetime the farms leave Australia.”

While enormous opportunities were on offer in northern Australia, local superannuation funds were focusing investment in other parts of the world.

“I went to Germany a couple of years ago in the course of my job and I said to my team, ‘how much money has Germany got invested in Australia?’ They said $11 billion, and I said ‘that’s not bad’.

“’How much does Australia have invested in Germany?’ $49 billion.

“That is our super funds investing in blue chips stocks in other countries around the word.

“We have $600 billion invested in the US in blue chip stocks.

“Some of that money could be here, but it is not.

“We have three trillion in super funds, but hardly a cent of that is coming into agriculture.”

Mr Robb said he was involved in the $2 billion Seafarms Group project to build a massive prawn aquaculture project on Legune Station in the Northern Territory.

At full production it will export 120,000t of tiger prawns from Australia into the Asian region.

It was an all Australian initiative with Australian technology. It has just received environmental approval and is in the process of securing an indigenous agreement.

He said investment by super funds in projects such as this would help northern Australia to capitalise on the spectacular opportunities being created by growth in the Asian region.

“These are the things happening up here. There is so much technology, so much water, but it is going to take a lot of money.

“If we are to capitalise on the opportunity, and not be run past by other countries around the world, we have to maintain and keep the doors open to foreign investment. Sensibly done, in the national interest, but we need the foreign investment.

“Don’t let others dictate to you because of their concerns or their prejudices. If you have a view about these things make sure it is heard.”