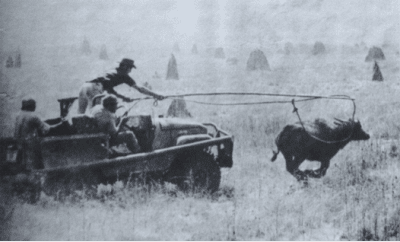 Lasso on a pole, fraught with danger for operator and animal.

It was developed to help men chasing wild buffalo for the game and pet meat market in the Top End of Australia, also the lucrative export game meat market.

Various methods were tried to capture animals alive for loading out to mobile abattoirs. People were lassoing animals from bull catchers, as well as bowling the animals over with large “bull bars”, putting at risk both animal and human. First, positioning a buffalo to run parallel to the vehicle.

The Kal Carrick Bionic Arm is a mechanical arm mounted to a 4×4 vehicle, fabricated from spring steel and shaped to enclose the neck of a feral buffalo, scrub bull or any animal from these species.

The arm holds a captured animal against a flat steel side panel parallel to the vehicle, usually a cut-down Toyota known as a “bull catcher”.  The arm is attached to an electric winch, activated and controlled by the driver of the Toyota.

The captured animal is positioned for relatively easy transfer and loading to a truck.  This system is a vast improvement on other capture methods that included an animal being knocked down by a vehicle and subdued with leather ties. Second, the driver operator activates the arm from a toggle switch on the steering wheel.

With Kal Carrick’s Bionic Arm an animal is captured quickly, allowed to recover while secure and walked to a loading point. Not only does the animal suffer a minimum of stress, there is virtually no damage or bruising to the beast.

The Kal Carrick Bionic Arm was initially designed for the buffalo industry in the 1970s but has transferred to other industries where gentler, more secure handling of large animals is necessary for their health and welfare.

In 1974 at a buffalo catching camp on Waigait Aboriginal reserve NT Peter Pangquee (a recipient of an Australian Day award), to our knowledge the last remaining buffalo shooter who harvested buffalo by shooting from horseback, described how, in the 1940-50’s, they used a 4×4 Blitz truck to chase buffalo retreating for the paperbark swamp or the timber. They would use the straight side of the Blitz to turn the buffalo and as the animal would lean into the Blitz, the two Bushmen concluded that it would be a good opportunity to capture it. 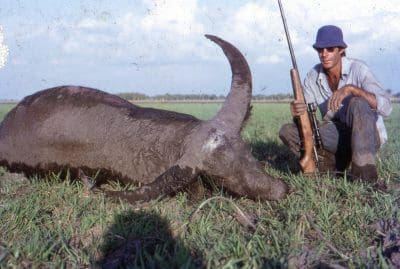 Kal Carrick, an expert marksmen and buffalo shooter, as well as being one of the best musterers of live animals, had a reputation for being a skilled “bush engineer”.

He created a prototype of the Bionic Arm in a workshop and tested it on the floodplains, refining it until came into its present form.

It was quickly taken up by other people in the buffalo industry and then appropriated by the cattle industry. Now, many properties in the north have a dedicated mustering vehicle with a Kal Carrick Bionic Arm. Since its conception in 1974 and the issuing of a patent in 1981, it has been difficult to objectively count the total number of animals captured using Kal Carrick’s bionic arm. The target animals were the bulls that dropped from the conventional muster because they ignored repeated attempts to be moved by helicopter and other methods. This equipment is still in use today in North Australia where there are large numbers of feral buffalos and cattle.

The Bionic Arm continues to play an important role in the capture of unmanageable livestock.  There is currently a workshop in Darwin fitting Bionic Arms to existing Toyotas.

The National Trust in the Northern Territory selected the Bionic Arm as a Territory Icon along with Cyclone Tracey, Henley on Todd, the Beer Can Regatta, and a Sydney Williams Hut. 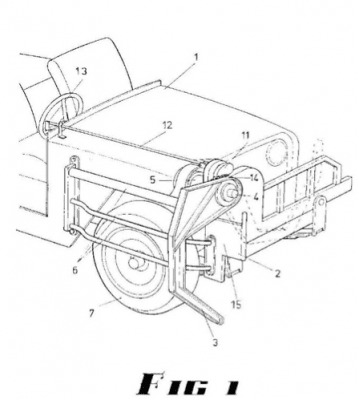 A figure from the Patent document.

Not only has it stood the test of time (over 40 years of use) but it has never been improved upon.

Kal Carrick’s Bionic Arm is an absolute gem of an invention; it solves the problem of handling dangerous animals that could otherwise have inflicted damage and death on people in the buffalo and cattle industry. Furthermore, it resolves animal welfare issues that have come to be a priority in the Australian pastoral industry.

This is an extract of a document submitted to the Australia Day council in support of a nomination for Keith ‘Kal’ Carrick to receive an Australia Day award. The author has asked to remain anonymous. Mr Carrick was named as a recipient of a medal of the Order of Australia in the General Division (OAM) in the 2018 Australia Day awards. A Toyota 4×4 with the Bionic arm mounted on display at the National Museum of Australia in Canberra.