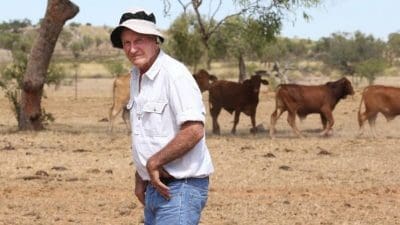 John Henwood at Fossil Downs where he and his wife Annette developed a highly improved Droughtmaster herd over the past 30 years.

A commercial cattle breeder who helped to pioneer the introduction of Droughtmaster cattle in the Western Australian Kimberley region has been honoured with a medal of the Order of Australia for his services to the cattle breeding industry.

Third generation Kimberley cattle producers John Henwood and his wife Annette, who until 2015 owned the majestic Fossil Downs station on the Leopold River east of Derby, have been stalwarts of the Droughtmaster cattle breed in the region for more than 30 years.

They began buying Droughtmaster bulls from the annual National Sale in Rockhampton in 1985 to improve their-then herd of Kimberley Shorthorn cattle.

The Henwoods’ connection to the Kimberley and Fossil Downs runs deep. Annette’s grandfather Donald MacDonald and her uncles William and Charles settled on Fossil Downs after driving a cattle herd 5600km overland from Goulbourn in NSW in 1882. John’s grandfather George Rose was a member of the Alexander Forrest expedition to the Kimberley in 1879 and also became a pioneer of the region’s early cattle industry.

In 2015, after 133 years of continuous ownership by their family, the Henwoods sold the 400,000 hectare Fossil Downs and its herd of 15,000 Droughtmaster cattle to mining magnate, cattle station owner and fellow West Australian Gina Rinehart.

In the same year Mr Henwood was awarded Life Membership of the Droughtmaster Stud Breeder’s Society – the first time in the Society’s 55-year history the honour had been bestowed upon a commercial cattle producer.

In a written tribute for the Life Membership award, close friend and fellow Droughtmaster breeder Pam Spann from Minlacowie Droughtmasters at Goovigen, Qld, described how the Henwood’s association with Droughtmaster cattle evolved:

“In the early days of his bull buying John was happy to purchase the average priced bulls but over the years he came to realize the genetic gains of the better bull. Over time, as he learnt more and more about our breed, he saw the value of the extra length and muscle in his steers and therefore sought out the bulls with the length, muscle and scale, which he felt would throw those attributes on to their progeny and at the same time handle the Kimberley conditions which weren’t always kind.

“That his cattle have done this and more, pays credit to his sire selection.”

Pam further described the demanding criteria John applied to selecting sires for purchase: “The bulls must be polled or scurred (because of the mammoth task of dehorning at branding time dehorning). They must have length because they realized the value of that extra length in the carcass, this became one of their main criteria. Along with the length they must have big strong bone with plenty of length of leg underneath them. The distances the cattle had to walk and the terrain they often had to travel demanded this as it was not always easy going. Finally their preference was for a lovely, golden tropical coat and smooth rounded rump. Anyone who was ever fortunate enough to visit the beautiful Fossil Downs was able to see firsthand the amazing gains they were making.”

In another first for a commercial cattle breeder, Mr Henwood was recently appointed to the role of Droughtmaster Breed Classifier, with responsibility for assisting stud breeders with the selection of animals suitable for stud duty, a role traditionally granted only to experienced stud breeders.

In supporting his nomination for an Australia Day award, Droughtmaster Stud Breeders’ Society chief executive officer Neil Donaldson said Mr Henwood and Annette had been passionate advocates of the Kimberley cattle industry for more than 55 years.

“They have organised and attended scores of meetings with abattoirs owners and associated bodies in an effort to establish a processing plant in the Kimberley (currently the nearest abattoir is several thousand kilometres away).

“They have feted and cajoled (with equal energy) various politicians, public servants and people with influence in a bid to improve the services for other pastoralists as well as improving the living conditions of all people living in the Kimberley.

“These deep roots in the Kimberley are part of the reason John and Annette have been such strong advocates for improvements in the Kimberley, but I believe their humanity has been the strongest influence on their exceptional efforts.

“Apart from their quest for improved community conditions and services, John and Annette have been at the forefront of the development of the live export trade for cattle.  They were one of the first pastoralists to market their cattle as a unique entity – their cattle were marketed under their Fossil Downs “brand” rather just as a part of a total consignment of several thousand cattle from unknown properties of origin.  This innovation encouraged other cattle producers to improve their cattle genetics so they too could “market their brand”.

“John is certainly a worthy nominee, however he would not have achieved what he has without his wife Annette by his side for more than 50 years – truly a team effort.”

The citation provided with Mr Henwood’s award includes the following details about his service:

Recipients of 2018 Australia Day awards with connections to agriculture and rural Australia included:

MEDAL (OAM) OF THE ORDER OF AUSTRALIA IN THE GENERAL DIVISION

Neville John Thompson, Temora NSW for service to agriculture, and to the community of Temora.

Arthur Pendrill Charles, Paddington, NSW, for significant service to the primary industry sector through roles with agricultural societies, as a children’s author, and to the community.

Dr John Williams Meagher, Camberwell, Vic, for significant service to agriculture, particularly to the wheat and potato industries as a consultant, researcher and administrator, and to the community.

Christopher Leslie Russell, North Turramurra, NSW, for significant service to agricultural science and technology through advisory, developmental and research roles, and as a mentor and innovator.

Dr Reginald Raymond Storrier, Crace, ACT, for significant service to agriculture specialising in soil science, to education as an academic and administrator, and to the Catholic Church in Australia.

Professor David Richard Coventry, Adelaide, for distinguished service to primary industry, particularly to sustainable agricultural production, as an academic and researcher, and through the facilitation of training programs and scholarships in developing countries.