Aussie feeder/trade cattle prices now most expensive in the world

THE slump in cattle prices in the US as COVID-19 forces processing plant closures and a large buildup of slaughter-ready cattle has helped push Australia back to the top of the rankings in terms of world cattle prices.

Foreign exchange movements have also contributed to the trend, with the A$ appreciating by about US9c, or 14 percent, since its low-point in mid-March. This is making Australian cattle (and beef exports) look relatively more expensive, when measured in US dollar terms. 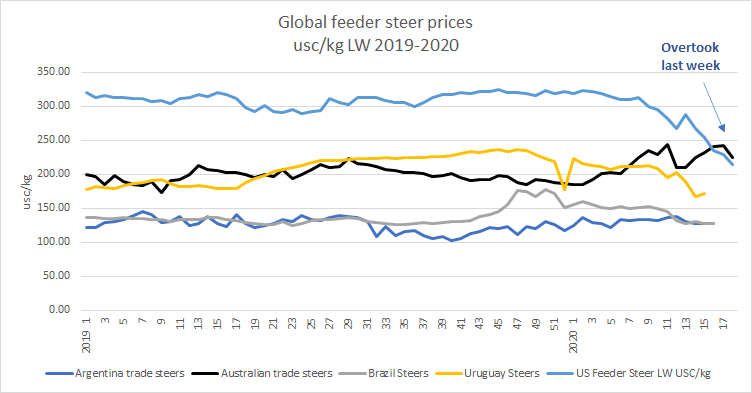 As can be seen in the graph, Australia slipped past the US in the comparison during week 15. Australia last went past the US for the most expensive trade/feeder cattle in the world back in 2016.

As of last week, Australia’s feeder steers prices became the most expensive in the world, surpassing US feeder prices at US224c/kg.

But the real concerning factor for Australia, Mr Quilty says, is the price difference that has emerged between Australian feeder cattle and South America’s feeder steers. The table below shows that Australian prices are now 31 percent above Uruguay levels, and 75pc above both Brazil and Argentina’s pricing.

“It is an important reminder of how uncompetitive Australia’s pricing is against our major beef export competitors and how unsustainable these levels are,” Mr Quilty said.

“Australia having record global steer prices may not be sustainable given the downturn that’s been seen in global food service markets. Slaughter capacity in Australia is likely to fall in coming months as current cattle prices become unsustainable. The quality end of the global food service beef and lamb markets is struggling, and will take at least six months to recover,” he said.

In the meantime re-stockers might well be the ‘only game in town’, and without overseas markets paying good money for middle cuts and food service items, then Mr Quilty believes paying these current high prices for feeder steers is unsustainable.

Foreign Exchange is working against Australia and the US

One of the key reasons for Australia’s feeder steers being so expensive currently is the high A$ value – as much as 34pc higher in value against Uruguay’s Peso, 38pc higher than the Brazilian Real the 69pc higher than the Argentinian Peso. This was intensified last month when the A$ rallied 9pc against the US$, while the Argentinian and Brazilian currencies fell 3-5pc – making Australian livestock even more uncompetitive.

US exports are also trying to compete with South American meat products, and like Australian are at a clear disadvantage. 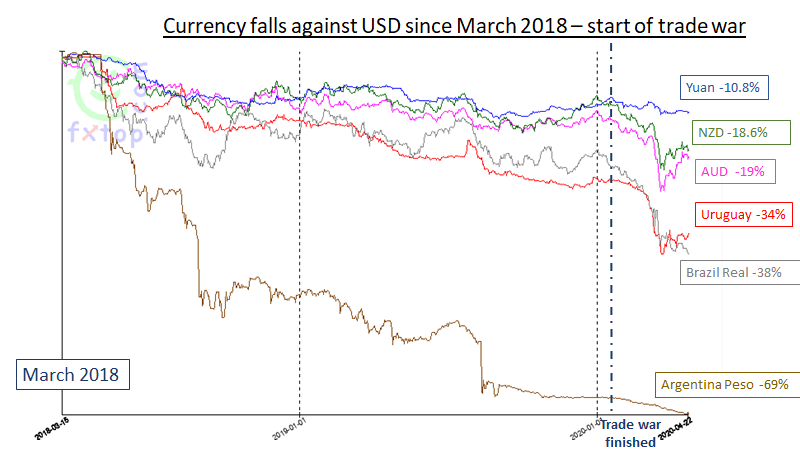 “When looking at Australia, New Zealand and US competitiveness into China against South America, both in terms of foreign exchange and cattle prices, it shows the challenges that lie ahead given South America’s combined market share into China is 78pc,” Mr Quilty said.

“South America’s cattle prices are on average 36pc cheaper than Australia’s, and 34pc cheaper than US prices. South American currencies keep falling against the US$ and A$, making their cattle and meat exports even cheaper,” he said.

Much of the reason for Australia’s high cattle and sheep prices was the fact that Australian cattle herd and sheep flock are in the process of rebuilding after being decimated for two years by severe drought.

“Both breeders and re-stockers are taking advantage of the grass and looking to buy anything that’s suitable,” Mr Quilty said. “In recent weeks, re-stockers have been outcompeting both lotfeeders and processors for cattle, as ‘green fever’ set in.”

As a result, Australian re-stockers were banking on putting more weight on their cattle at a faster rate than cattle prices fall.

“Given that Australian feeders are now the most expensive in the world and global beef markets have fallen in value, I am not sure if this is a winning strategy. Next year might be different,” Mr Quilty said.

Should good rains continue, as expected, then the rebuild in Australia could continue in earnest for the next two to three years, he suggested.

The last six months of the drought was particularly devastating when a record number of females were slaughtered, Mr Quilty said. He estimated the national herd size by mid-2020 would reach around 24 million head, but given the likely good seasons ahead, it was likely to rebuild to 29.2 million head by 2024.

The cost of COVID-19 on global markets had been significant and in particular, on the food service sector where market failure is occurring, he said.

“Meat supply to markets I believe needs to slow down in volume for them to have a chance of recovery. I expect a fall in feeder steer prices over the next six months in the range of 20-25pc compared to March levels, as it will take time to recover.

The long-term gain would be in improved pricing in 2021, Mr Quilty said, as global markets shake-off the shackles of COVID-19 and quickly recover, producing a rebound effect in global growth.

“Recent forecasts by the International Monetary Fund support this view, with a 3.4pc growth in the first half of 2021 and a 5.8pc increase in the second half.

Mr Quilty anticipates the Eastern Young Cattle Indictor to fall from its 704c/kg high recorded on its last reported day on 28 March, to around 640c/kg by November/December, before recovering to a new record level of around 850c/kg in March/April next year. The EYCI may then fall away again to around 610c/kg around August next year, he predicts.