Online marketing is gaining a foothold in an ever-widening catalogue of consumer goods and services, and the list has now expanded further with the establishment of a dedicated national online meat wholesaling business.

Meatonline (www.meatonline.com.au) has no shop-front and does not own or operate a traditional wholesaler’s cold storage and distribution depot.

Instead, it’s entire business is based on online sales to food service and retailer customers.

While other online meat sales businesses have emerged in recent years, most focus on retail sales to the public, rather than wholesale trade. Meatonline does not deal with the public.

The business is still in its first year of existence, but already has more than 30,000 online subscribers to its weekly product/price email bulletins. Within that, the company claims to have between 600 and 700 active customers.

Average monthly growth in turnover is currently between $30,000 and $40,000, a company representative told beef Central.

The business is owned by a large meat trading company, but the parent company owners at this stage wish to remain anonymous.

The business was originally Queensland-based only, operating under the name, Australian Premium Meats, but changed identity to Meatonline with the move to a national model.

Once a customer places an order and makes payment online, the purchase is picked, weighed, charged and shipped out the next day.

“We’ve taken the vast majority of costs out of doing business with this model, enabling Meatonline to pass on genuine wholesale pricing direct to end-users in the food service and retail sectors,” he said.

“Website-based ordering means that without incurring the associated costs of sales representatives and back-end office staff, we can offer genuine wholesale meat to small, medium and large customers. By maintaining this ‘no-frills’ model, we set a base margin and change our prices according to stock and general market conditions, offering up-to-date pricing daily,” he said.

The business at this point is targeting the food service sector – pubs clubs, hotels, restaurants and caterers – rather than retailers. Hotels, service clubs and restaurant chains currently represent 80 percent of the business. 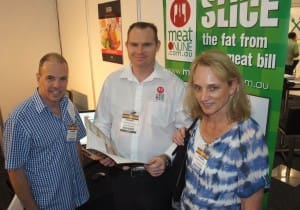 Mr Fuller said the low-overheads business model was able to provide a price-point which is different from conventional wholesaling, claimed to be around 20 percent below the current market price on some items, at the time of discussion with Beef Central recently. At time of interview, Meatonline had 1824 MSA rumps wholesaling for $7.99/kg.

“Our overheads are very low,” Mr Fuller said. “I run the entire front of house myself, with no staff; I don’t hold accounts; I don’t have dozens of reps running around the country,” he said.

At the back-end, a network of supplier depots around the country in NSW, Victoria, South Australia, Victoria, Western Australia, the NT and Tasmania, operate on contract, responsible for getting the meat out. The company claims it can get orders out to anywhere in Australia.

The Meatonline business has developed its own in-house ‘star-rating’ system for different products, based on quality and price, ranging from six-star to three-star. Four and three stars denote economy and budget segments, respectively, while all MSA products are designated six stars. Organic, Halal and other specialty items are available.

The range also includes the 246 branded lamb out of Warrnambool in Victoria, Ramsay veal out of Casino, plus pork, chicken and seafood.

The website even includes sales for butchering machinery and other equipment, with a bandsaw sold to an operator in remote Thursday Island in the Torres Strait only a week or two ago.

“The first time a new customer tries it, they’re hooked. It’s like having their own in-house purchasing manager.”

He arrived in the meat wholesaling business through unconventional channels, being a qualified chef who owned and operated his own business for six years before moving into meat wholesaling. He feels his professional background provides a good opportunity to interact with customers on cuts selection and utilisation.

“We absolutely see the online space as the future for meat wholesaling,” he said.