It’s symbolic of the early approach being taken by the industry service delivery company’s new operational head, who took up his duties a month or so ago. 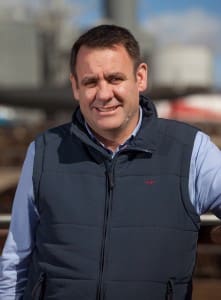 Already, Mr Norton appears eager to engage as closely as possible with grassroots stakeholders, and perhaps to define his management style using some of the strong ‘customer-focus’ principles he functioned under as a commercial private sector agribusiness management executive with Landmark.

That commitment will come as music to the ears of many red meat industry stakeholders, who have been starved of access to senior MLA management or board personnel since January’s departure of former managing director, Scott Hansen.

Unlike predecessors like Don Heatley and David Crombie, who were very much the public face of MLA at industry level, current MLA board chair Michelle Allan continues to adopt a low-key approach, choosing to focus on internal board responsibilities, while leaving engagement with stakeholders to the managing director.

The departure of Scott Hansen in January has left an alarming void in that space for the past six months, which some say has inevitably damaged MLA’s reputation in the marketplace. But if Richard Norton continues to deliver on his opening ideals, there appears a good a chance that glaring deficiency will be turned around rapidly.

Beef Central got its first chance to engage with the new MD after an MLA boardmeeting in Brisbane a fortnight ago, and he subsequently agreed to a preliminary interview yesterday, despite ‘still getting his feet under the desk.’

“I want to engage on a regular basis with all industry stakeholders who want to have their say about MLA – good or bad,” he yesterday, when questioned about the MLA website contact reference.

Mr Norton said the internal scrutiny was initiated under instruction from the board, which made it ‘quite clear’ that it wanted such a review to take place. The scrutiny would encompass the entire MLA organisation and would focus on efficiency and effectiveness, across all of MLA’s operations.

While it would focus primarily on ‘big picture’ issues, it would also drill down to levels of detail including staffing levels and individual staff deployment, he confirmed yesterday.

From a marketing perspective, the review would seek to ensure world’s best practise was being applied across MLA’s international and domestic marketing work.

“In all areas of MLA operations, I want people to understand that anybody spending levy payers funds is being held accountable for delivering on those funds,” he said.

In terms of research and development, that’s likely to mean embracing more of the findings of the recent independent MLA R&D systems review. Beef Central broke the story about the independent review of MLA’s R&D activity, and MLA’s earlier somewhat ambivalent and dismissive response to it, in this article back in September last year.

Mr Norton said the MLA board had placed on record that it was disappointed that not all the recommendations in the report had been closed-out yet, and that the stakeholders in that review had not been told ‘where things were at.’

“From my experience in commercial agribusiness, you don’t get away with that sort of stuff with stakeholders,” Mr Norton said. “You do what you say, and are accountable and measurable in all aspects of your organisation.”

“From an R&D perspective, it’s about how MLA engages with all levy payers about what R&D is done by the organisation, in conjunction with the peak councils.”

“To me, it’s clear that MLA has to do a lot more in using tools like focus groups, and at very least, have levy payers engaged in the process from the earliest stage, knowing where their money is being spent, and being part of the R&D development process.”

Mr Norton said he was keen to ensure that due diligence was applied before R&D project work started, ensuring, for example, that it was not duplicating work already done in other parts of the world, or that it was not using methodologies that might be out of date.

“If it’s a project on northern beef herd fertility, is there anything similar that’s being done in Brazil, for example? Who’s reviewing the work, in order to tell me that the methodology behind the project is world’s best-practice, and not wasting levy payers’ funds on an R&D project that is using ten-year old, outdated methodology?”

“All of this is an opportunity, because as an MD coming into an organisation marketing the best food product in the world, and having these sort of things outstanding, it is just an opportunity to review the whole process, and try to engage with stakeholders about what the new structure will be, around what we do as an organisation,” he said.

“The rate of adoption of new processes and technologies resulting from R&D work is key in all this, and in the past, perhaps extension work has been outsourced too much. It’s my intent to have MLA people engaging more with producers on-farm, doing more of the extension delivery work.”

That would provide clearer lines of communication on what future issues producers saw for prioritising R&D work, he said.

“I’m not saying that all R&D projects are going to work, in delivering huge profitability gains for industry. But we’re going to have a crack, and at least our levy payers will know what we’re working on, and what’s coming through the pipeline.”

Beef Central suggested that any upscaling of on-farm extension by MLA would require considerable expansion in resourcing.

“It’s all in the mix at the moment, but we’re paying someone else to do it now. Whether or not we take resources from other areas and do more extension work ourselves, is part of the current review process,” he said.

“If we go down this path, we will come back with a fully-executed structure and plan – hopefully by about mid-August.”

He saw online webinars as a good example of where MLA hoped to engage more consistently with stakeholders in the extension space. “If we can get perhaps 200 or 300 people engaged with a webinar on a particular topic, then that will be a key extension strategy going forward,” he said.

Beef Central, through the Futurebeef program, is already engaging with MLA closely in early webinar work, such as this earlier webinar project on long-distance MSA transport.

“One of things that’s come out of the senate inquiry is that levy payers are not regularly engaged with MLA, or in huge numbers. We need to understand how we can achieve better engagement, and greater use of webinars may be part of that process,” Mr Norton said.

Beef Central asked Mr Norton whether he saw transparency as an area that MLA had to work harder at, in delivering a service to levy payers.

“I think MLA, like a lot of organisations, has had the software and hardware issues around how a lot of reports are published online, for example. That can just be the amount of funds it has access to, or how much funds are dedicated to clearly and easily communicating those projects via the web.”

“Websites is one key area where we can make it a lot more efficient and easier for grassfed levy payers to understand what is happening in grassfed levy expenditure on R&D in the current year, as well as what is proposed for next year and the year after that: What the milestones are, where are they up to, and that type of thing.”

Any stakeholder, at any point in time, should be able to go online and understand exactly where levies are going, he said.

“I see that as a key objective. I want the current internal operational review completed smartly, and people (MLA employees) knowing exactly what they are doing on behalf of levy payers on a daily basis. They need to be sitting at their desk every day asking, ‘What can I doing for red meat levy payers today?’,” he said.

“I’m not saying that that culture is not there now within MLA, but coming from a customer-focussed business background as I have, it’s in my blood to make people think about customers, and being customer-centric. It’s a key quality that I hope to bring to MLA.”